As I walk out into the world today in the post-exuberance of Australia Day (thought ot be fair yesterday was in all actuality quite normal), I do not look out into a sea of green and gold, but a very different colour, yes, woad. Or rather Pantone colour 280, Navy Blue, #000080, RGB (0,0,128). The very same navy blue that forms the background colour of the Australian Flag.

The point being that every January 26th, someone always invariably starts a debate in the newspapers about whether or not Australia should change its flag and/or become a republic. The usual reasons are that it is not representative of our history, or that people find it offensive to have "the flag of another country" pasted on ours. "Bosh" I say top all of that! Pooh to you with highly polished brass knobs on. If the Australian Flag was so offensive then why is it plastered everywhere? This is of course just an aside to the main thrust of this post, which is:

What is the point of an Australian Republic?

It must be said that in Australia, we have enjoyed 110 years of political stability, and in the case of the states which operate under the same model, parliaments which extend all the way back to 1855; in fact the NSW State Parliament is the longest continuously operating parliament in the world.

This is not merely a case of "if it aint broke, don't fix it" because the stakes are far higher than just changing a figurehead. The way I figure, if Australia was to become a republic, the obvious question would be what form it would take.

The Constitution of Australia provides that in order to change the constitution, that a referendum be held and that it be carried by a majority of voters in a majority of states. This all sounds fine and dandy, but in order to frame a change to the constitution it would either require putting forward a model to be voted either "Yes" or "No" on, or if in the event that the government of the day wanted to gauge what public opinion actually was, it would have to hold a series of non-binding plebiscites to determine the will of the people. The latter option is more likely to result in a negative outcome for those who would want to change to a republican model.

Personally I would prefer that Australia remains within the British Commonwealth, but I suspect that the will of the vocal would rather drown out my voice with a cacophonous din. Then again, I wonder if they've thought through all of the implications.
Posted by Rollo at 14:55 0 comments

http://www.smh.com.au/lifestyle/wellbeing/fat-fees-threaten-to-push-personal-trainers-past-their-limits-20100112-m4u5.html
Personal trainers who are feeling the burn as more Sydney councils charge a fee for the use of parks, sporting fields and beaches have warned they will have to pass the cost on to their clients.

The gist of this article is essentially an emotive argument perhaps trying to convince readers to somehow feel sorry for Personal Trainers having to pay usage fees for public parks. The obvious claim is that with increased park use fees, then those additional costs will be passed onto their clients and thus tend to make them unviable.

Stiff Cheddar!
I would ask Fitness Australia to take a good hard look at itself and stop whinging!

What do they think of not-for-profit organisations having to pay councils far more than a mere $550 a year? Plenty of local sporting teams such as cricket, netball, football, field hockey are already paying upwards of $5000 a year for the use of sporting fields, and you don't hear them bleating to the Sydney Morning Herald about paying fees to local councils.

And just who are the sorts of people who are likely to be engaged in hiring a personal trainer in the first place? If you were to take a look at the economic demographics, then I'd wager that in 99% of all cases, it is people in the highest wage brackets; hence the reason why the particular councils being questioned are Waverley, Randwick, City of Sydney , North Sydney and Mosman councils. These aren't exactly the poorest of areas now are they?*
It is exactly the sort of people who can most afford to pay, who engage these sorts of services and who live in these areas in the first place.

Don't expect me to feel sorry for these people. By council area they are exactly the same people who by default condone charging de facto "usage fees" though exorbitant parking charges at Sydney's popular beaches.

Boo Hoo Hoo - my heart bleeds for you.

*According to the ABS Book of the Year for 2008, all of the top 25 "richest" suburbs in NSW are contained within these 5 councils.
Posted by Rollo at 09:11 0 comments

Photos have gone around the world over the past few hours of the 2011 Ford Focus, that is to say the Ford Focus Mk3.

The car again shares the Ford C1 platform which the Focus Mk2 sat one as does the Mazda 3 and the Volvo S40 and C30. The engine choices from what I can gather will be more or less the same but with more of a drive towards Ford's Econetic program. This would logically include the current range from 1.4L to 2.0L in petrol and diesel and the 2.5L RS variants.

As far as styling goes, the car shares the same styling trend as the current Fiesta Mk6 though that bar across the centre appears to be in deference to the North American range of cars such as the Ford Taurus, Ford Fusion and the rather odd looking Ford Flex.

What I find most disappointing about this car isn't that it looks like the Fiesta (which I quite like) but that it looks like everyone else. That pinched D-Pillar may as well be on the Opel/Vauxhall Astra¹ , Hyundai's i30, the Mazda 3, Seat Leon, etc etc etc. To be honest I was hoping for something a little more cutting edge from Ford, perhaps I shouldn't have bothered.

Remember, that this is the car for which Ford Australia were given $149m to be a part of after they announced that it would be built at Broadmeadows in 2011², and then pulled the project during the Global Financial Ripoff³.

What the car will do, is finally a) merge the North American Focus with the rest of the world and b) hopefully remove the Detroit's design houses insistence to barry up the American version. 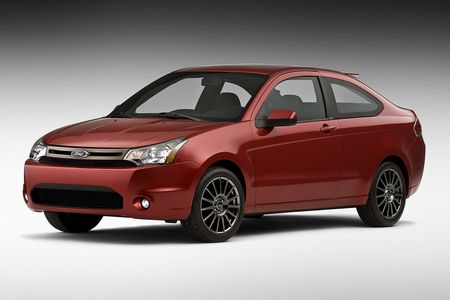 ¹which we in Australia never got because Holden think that the great Australian public are incredibly stupid, so fob us off with Daewoos.
²http://www.drive.com.au/Editorial/ArticleDetail.aspx?ArticleID=41903
³http://www.themotorreport.com.au/38133/ford-abandons-local-focus-in-favour-of-ecoboost-four-cylinder-falcon-and-diesel-territory/
- Wow. Three sidenotes! What a truly bonkers day.
Posted by Rollo at 15:29 0 comments