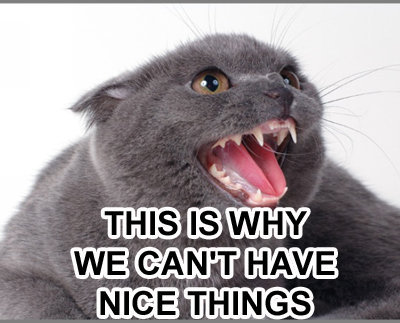 Something which has been bothering me for a long time, is that in just about every facet of modern life, we seem to be surrounding ourselves in ugly or boring things. If I want to go out and replace my worn out furniture, I can not seem to find anything which looks remotely nice. Things today are produced with only a short term end in mind, and as such don't appear to have the thoughts of a craftsman poured into them.
You can see this right across architecture, White Goods, Brown Goods, motor cars, music, etc. etc. etc.
It often feels like the only things that are made with their aesthetic beauty in mind anymore are someone's dinner in a high class restaurant and possibly high-end watches.

I wanna know WHY we can't have nice things?

Before the advent of photography, painters and sculptors had a different purpose for art. If they were trying to capture how someone looked, it was usually done through rose-tinted glasses because they were being commissioned by either the person who wanted their likeness painted, or they wanted one of their family or friends painted. The motivation although tied with with money was to make their subject look nice.
With the painting of landscapes, although the artist would on occasion try to invoke a sense of fear, or perhaps sorrow in their work, in general they still managed to capture the beauty of view in at least one aspect.

Even with industrial manufacture, items which were mass produced were often things of beauty. A hundred years ago, people put thought into making ironwork for railings and fleur-de-lis which often stood as a regal, political, heraldic or symbolic device, now suddenly found itself on the front fence of the houses of workers. One of my favourite subjects the motor-car, used to be styled by people who still thought about creating machines which looked beautiful. Something as humble as the Austin A30 which by all accounts was a terrible motor car mechanically and would be beaten by a Toyota Yaris, still looks asthetically nicer 50 years on. The Ford Cortina Mk1 is also a better looking and prettier car than today's Ford Focus.
Radio sets used to be massive pieces of furniture which would often adorn the parlours and sitting rooms across the land. Today we have plasma screen TV's which fulfil largely the same sorts of function, but an old radio is a warm looking thing whereas today's recto-linear TVs, MP3-Pod machines, Tablets, all somehow look cold and aloof.

I think that the same can be said for music. When an Austrian nobleman comissioned a symphony in C which defied all earthly description, the composers who crafted their pieces did so with all the care than any true artisan would.
Now it can be said that practically anyone with a decent computer and sound editing software can potentially produce music. The charts today are flooded with largely talentless individuals who can be autotuned to perfection or autotuned with weird effects. I seriously doubt whether anyone is actually trying to make beautiful music anymore.

Mankind it must be said has been endowed with all sorts of ingenuity, and an incredible drive to explore, build and create. I totally understand the need to make a dollar; I even accept the fact begrudingly that some people are hideously greedy in pursuit of that dollar, and perhaps to some degree why we often need to surround ourselves with material possessions BUT if we are going to do this, then why must we forcibly subject ourselves to ugliness?

This post from elsewhere in the blogosphere also touches on this subject:
http://everydayeverywhereeveryone.blogspot.com/2009/02/oscar-wilde-wallpaper-objects-and.html
Posted by Rollo at 10:38