http://www.dailytelegraph.com.au/newslocal/blacktown-advocate/residents-have-a-say-on-shortlisted-names-for-new-north-west-suburbs/news-story/d40eb731ce47735e00958a025cdc7857
ELEVEN suburbs near Marsden Park will be created and will receive names inspired by the region’s history, geography and botany.

Who says I don't go local?

Previously in this blog, I have dispensed advice on how one should name one's children despite not having any children of my own. I can report that to date, all children that have been born and named by parents that I know since that blog post have all been given sensible names. Well done. Big tick. Advance to GO and collect $200.
This week, the Blacktown Advocate reports that something bigger is to be given names - eleven suburbs. Having dispensed advice previously and having it work out well, I now feel qualified to dispense more advice on naming things.

In Australia, we have a pretty horrible sort of past when it comes to naming places. New South Wales is named because the one bit that Captain James Cook's voyage found in 1770, apparently looked a bit like South Wales. I have been to South Wales and in my not very well paid opinion, all those months at sea must have rotted out the brains of those explorers because South Wales doesn't even remotely look like anything in Australia. We have two states which were named after Queen Victoria and by the time that the other colonies were founded everyone had clearly lost interest because three big areas are named for their geographical description. The Australian Capital Territory isn't so much a name as it is a description of what it is.
The other thing that we do in Australia is name things egotistically. When explorers opened up the country, they didn't consult the locals who were already living there about what they already called things; instead they named stuff after themselves and the people who sent them there. Sydney, Melbourne, Brisbane, the Darling River, the Hunter River, the list goes on and on and on. It was only really recently when we accumulated a sufficient amount of history that we started to name stuff after historical things and dared to consult the locals as to what they traditionally named things.
These eleven suburbs which are literally being created out of thin air and the stroke of a pen, have all been given proposed names which are historically based and or sensibly named for other reasons. Going through the proposed lists, I wouldn't have a problem with any of them and think that they'd all pass into boredom fairly quickly.
Where is the advice that I'm going to  dispense, I don't hear you ask. The truth is that in my time playing computer games like Transport Tycoon, I have named many many places. I have seen the rise of cities, carved out rivers and conquered worlds. The names that I give cities are usually daft.

I find it helpful to dispense names in groups of 26, from A-Z, moving from top left to bottom right because if there happens to be a train crash in a town beginning with R for example, it's going to be somewhere in the south and near the center of the world. The next thing that I'm inclined to do is to give out names that sound like they could be quaint English villages. I think that in England, they must have reached the point of naming everything after geographic descriptions a very long time ago. At some point they've thought "whatever" and have just thrown random words around and I rather like that sort of thing.

As a result, some names constantly get repeated such as: St Christmas, Neil Astronaut, Wicker Basket, Much Waffling, Dunny On-The-Wold, Chimney Pot, in my grand naming schemes. They might all sound nominally ridiculous but they all equally sound plausible. Remember, there actually are places in England called Bishop's Stortford, Cheddar Gorge, The Isle Of Muck, Eel Pie Island, Elephant & Castle, and Battle. In Canada, Medicine Hat and Moose Jaw are both also real.
I make mention of all of this because it proves that unlike children's names, place names need not be sensible. They can be as daft as a brush and it's perfectly fine. 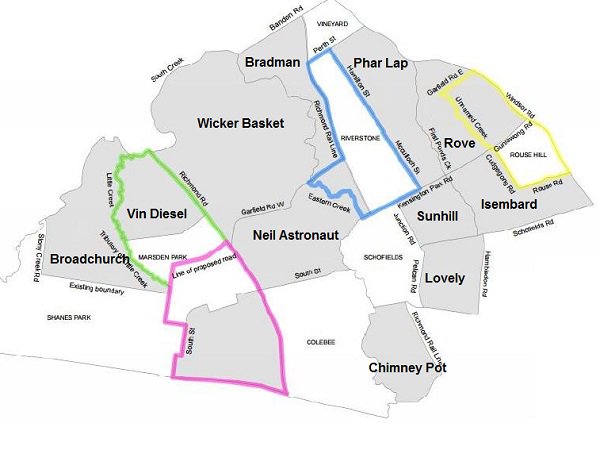 I think that if I'd been on the geographical names committee, I would have thrown the names Winterbottom, Phar Lap, Bradman, Midsomer, Broadchurch, St Mary Mead, Sunhill, Isembard, Bradfield, Florey, Uniapon, Lovely, Blue Sky Mine, and Rove, into the list of proposals. Within a few years they'd be accepted as normal and that would be the end of it. You could name a suburb Vin Diesel and it would sound ordinary after a time. People would just get used to it.
Posted by Rollo at 12:27