Horse 2368 - Health Insurance, Tax Returns, The IRS, And The Descent Into Madness 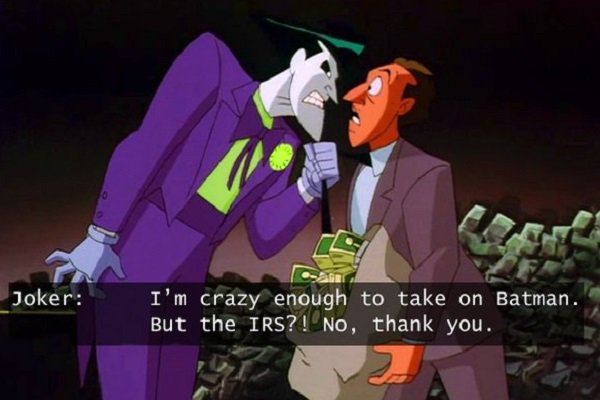 I feel your pain, Joker.

The United States like the majority of the world has its financial year aligned with the calendar year. This means that people's tax returns are due in the first quarter of the calendar year, as opposed to the third quarter of the calendar year like thy are in Australia.
As someone who has the job of doing tax returns for people who have income from the United States, I find American tax returns to be singularly ridiculous on many levels. This is also in concert with the fact that as the United States has a so called "republican" form of government (small r) as mentioned in the Constitution, and in addition to Federal income tax returns people also have to file state tax returns as well.
This year though, as part of the new wave of Trumpian idiocy, the concert of cacophony has been called up to a crescendo with the compulsory requirement to declare either if you have health insurance or an exemption from paying into a health insurance policy, or else the IRS by directive has been ordered to refuse to assess the tax return. In addition to this, the particular state that I'm doing a tax return for a client, has declared that the state tax return will only be assessed upon the issue of the assessment and file document number from the IRS.
What happens if you are a non resident alien, who has to file tax returns from outside of the United States? Thanks to the government shutdown, nobody knows. Actually, irrespective of the government shutdown, nobody knows.

I have a client who owns rental properties in the United States. The individual tax return demands that they have a health insurance policy or else the IRS won't assess the return. My client as a foreign non resident alien, who lives in a country with a universal health care system, has no need of a health insurance policy and so they don't have one. This concept seemed like a foreign non resident alien from the planet Zog as far as the chap who I spoke at the IRS was concerned, and explaining it to him was like trying to explain Newton's laws of motion to a pigeon.

Never mind the fact that this was announced in late October last year; which means that the IRS have had four months to think about this.

https://www.nytimes.com/2017/10/20/health/irs-obamacare-mandate.html
In the latest signal that the Affordable Care Act is still law, the Internal Revenue Service said this week that it is taking steps to enforce the most controversial provision: the tax penalty people face if they refuse to obtain health insurance.
Next year, for the first time, the I.R.S. will reject your tax return when filed electronically if you do not complete the information required about whether you have coverage, including whether you are exempt from the so-called individual mandate or will pay the penalty. If you file your tax return on paper, the agency said it could suspend processing of the return and delay any refund you might be owed.
- New York Times, 20th October 2017.

When it came to publishing information about this on the IRS's website, they only got around to it last Friday. One of the first things that they tell you about the purpose of accounting, is that the point is to produce useful information in a timely manner. This is the overview statement from the IRS:

https://www.irs.gov/affordable-care-act/individuals-and-families/gathering-your-health-coverage-documentation-for-the-tax-filing-season
Under the recently enacted tax law, taxpayers must continue to report coverage, qualify for an exemption, or pay the individual shared responsibility payment for tax years 2017 and 2018.
Once again this year, you may receive multiple information forms that you can use to complete your tax return and will keep with your tax records.

None of these things provide useful information for the set of circumstances that I now face and considering that this was published almost three weeks after the reporting season has started, it hasn't been done in a timely manner either.

After a bit of probing, I was able to establish that the only government provided health care systems which would fit into his questionnaire were Medicare and Medicaid. Although we do have a system in Australia called Medicare, the IRS computers couldn't handle an Australian tax file number or a Medicare number in the relevant fields.
After a bit more probing, I came to the conclusion that the ability to work out how to solve this issue was beyond this person's pay grade and that there were screens and options that they were locked out of. I thought it best to get a case number because it was getting late in the day and this person was legally required to read out some taxation information including the kicker that failure to lodge tax returns might result in criminal prosecution or even get my client deported. Since I had my telephone on loudspeaker, my boss who is sometimes quite dry and blunt said "That's not bloody likely" to which the person at the IRS took deep offence before I let them burn out their rage, and then my boss asked the rather obvious question of how you're supposed to deport someone who isn't even in the United States. By definition, a foreign non resident alien is someone who is a non resident, right? Apparently not. Like Australia, you can be a non resident if you are in the country for less than 182 days of the year.

Given that this is January of 2018 and that the implementation of tax policy tends to move at glacial speeds, I'm kind of worried that this won't be resolved quickly and that the US government will shutdown again on February 8 which will only prolong the issue even further. There's a special kind of madness which exists in the United States government where people want to reduce the size of government and then wonder why the pared down workforce is unable to cope that well with changes that Congress imposes on it.

Aside:
The whole underlying problem here is that the only reason that this stupid state of affairs exists is because of the push to move people towards getting health insurance under Obamacare. The Republicans like this sort of regulatory nonsense because it creates ill will against the system and they want it to die.
The best solution would be to implement a National Health Insurance Scheme which would be paid for via a statutory levy. This won't happen because the mantra of "individual responsiblity" is used to beat the American public into a state of stupidity, so that they won't realise that literally every single other country in the OECD already has a universal health care system which works better. Implementing a whole health care system is far too complex for a Congress that can't even get the paperwork on a tax return to work properly.
Posted by Rollo at 07:17