Horse 2495 - Clive Palmer Shouldn't Be In Parliament: He Should Be On The Radio

In the past week, I think I have witnessed the beginning of what is possibly the weirdest campaign in Australian political history. 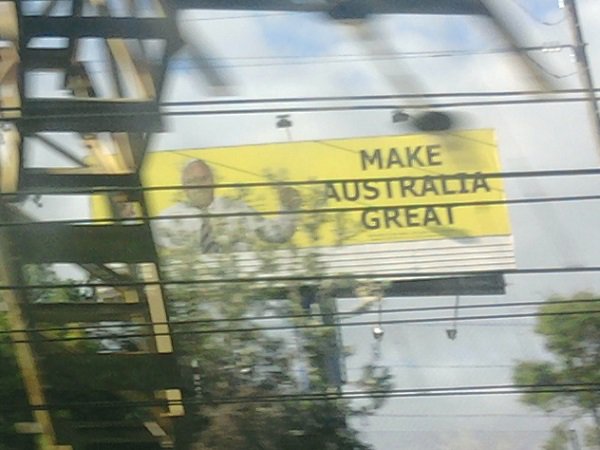 Closer to home, I found that this recently appeared on my way to the railway station. 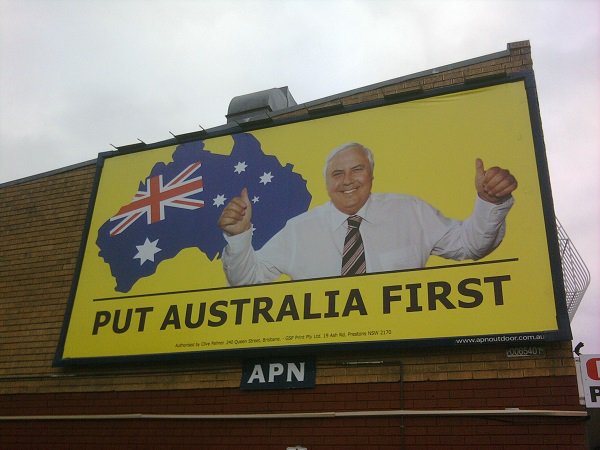 To be honest I have no idea whether or not Clive Palmer is even running for parliament or not. I have no idea if these are actually political billboards or not. I have no idea if Clive Palmer is trying to claim slogans before the racists get to them or not. What kind of political campaign is it when nobody is sure if you are actually running for parliament or not? One run by four time meme champion, Clive Palmer - that's what kind.
Clive Palmer's first foray into federal politics suffered the same kind of problem that most eponymous political parties face; a distinct lack of discipline and no real expertise in running the whips of the party. As a result, MPs defected once inside the parliament and it once again faded into the background. This problem also faces other political parties like the Jackie Lambie Network, Nick Xenophon's neXt, Bob Katter's  Australian Party and of course Pauline Hanson's One Nation, and while they might individually have longevity, they should have served as instructional, in that a top down party almost never works as opposed to a bottom up party like the Greens, Labor, or the Liberal Party.
Nevertheless, I still think that Clive Palmer should be part of the cultural fabric of Australia, just not as a politician.

The obvious comparison with Clive Palmer as a rich businessman entering politics would be Donald Trump. Trump had a pretty long run on NBC's The Apprentice and although I have never watched the television show, it apparently rated well enough for long enough that the network kept on making more shows. The reason why I cite Trump is that he is someone else who also shouldn't be in politics, and to be honest, kind of sort of isn't. The current White House administration is very much an extension of his unreality television show as far as I can tell. If this is true, then what is the best answer for Clive Palmer? I think that it is radio.

BBC Radio 4 has since 1967, been running a show called "Just A Minute"; which has been a staple of its Monday Night Comedy slot, for a very long time. The premise of the show is that the host gives panelists a topic which they must speak on for sixty seconds (hence the name " Just As Minute") and they must do so without repetition of words, hesitation, and without deviation from the subject. Offenses to these rules can be challenged by the other panelists and whoever is successful gets a point and continues to speak until the sixty seconds have elapsed. There is a link provided below.
The show has been successful for more than fifty years because the premise is absurdly simple and the show lends itself to having a wide range of panelists, though it is dominated by comedians. If we were to have the ABC commission our own series of Just A Minute, it would mean that the controllers of Radio National would have to shift the network from being almost entirely serious, to a degree of fun and frivolity; which would be more in keeping with the spirit of Radio National past. For a very long time The Goon Show appeared on Radio National at midday on Saturday and that's about as crazy bonkers as you can get. Something like our own series of Just A Minute would be the beginning of aligning Radio National to where it used to be; which is something like BBC Radio 4.

Leigh Sales once said on the Chat 10 Looks 3 podcast, that Clive Palmer was impossible to interview. Like interviewing Bob Katter, he dances around subjects like a hummingbird in a field full of flowers darts from place to place. That's not exactly a good quality for a politician but it is of considerable advantage on a radio panel show. It is noteworthy that on Just A Minute, other politicians such as Clement Freud and Giles Brandreth, have been fixtures of the show. I think that Clive Palmer was an abysmal failure as a politician but as previous politicians have proven, that skill set works extremely well when the consequences are nil.

Opponents will of course say that allowing politicians and business people onto television and radio shows humanises them as though that were a bad thing. This quite ignores the fact that politicians and business people are in fact humans and not just some canvas onto which you project your fears and hatred. I say this in the defence of politicians in particular because once you take them out of the white hot heat of politics, some of them make excellent television and radio. Ed Balls for instance, made a brilliant telly series traveling through "Trump's America" and I recently saw him on QI. Boris Johnson excels at making television about the Roman Empire and I quite liked his book about the history of the City Of London. It also turns out that John Major is actually a brilliant cricket commentator who is insanely knowledgeable about the minutiae of the game. I don't know that in Australia that we do a good job at looking beyond that particular hat that politicians wear and waste a lot of potential. Clive Palmer as a politician was bad but Clive Palmer as a radio show panelist would probably be wonderful.

Aside:
Just A Minute on Radio National would open the door to a whole host of potential panelists.
Leigh Sales, Annabel Crabb, Shaun Micallef, Francis Greenslade, Tom Ballard, Alice Fraser, Aaron Chen, Waleed Aly, Charlie Pickering, the two Kats, Emma Alberici, Jeremy Fernandez, Tony Jones and Fran Kelly aught to be a deep enough roster to draw panelists for the first series from. Throw in any international comedians who might be on tour and you have the ingredients for a show which could last well beyond 2068.
Naturally I'd cast myself as host because I have an ego the size of Tasmania and the perfect face for radio. So come on RN, what have you got to lose?
Posted by Rollo at 19:17