I just lost a game of clue and this is how far i got. 🤷‍♂️


Dear Americans,
I will now show you something which might not blow your minds but it did, mine: 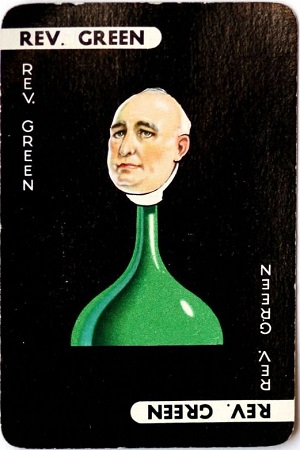 Dear Commonwealth countries,
I will now show you something which might not blow your minds but it did, mine: 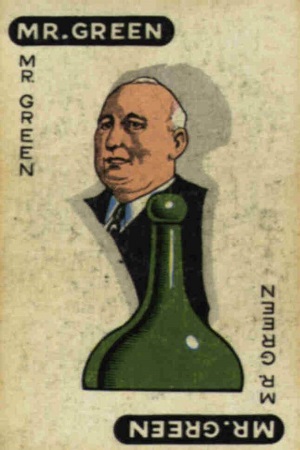 I was fully aware of the fact that there are regional variations in the board game Monopoly. The original version from America has street names from Atlantic City, while Commonwealth countries have street names from London, French editions of the game have Parisian street names, Italian editions have street names from Roma, and I honestly have no idea what they do in Japan where the streets have no name¹.
The idea that various pieces of intellectual property should be changed to fit a local culture is not at all strange to me, however the idea that the game Clue should have this kind of cultural change, strikes me as being both unnecessary and bizarre.
What is going on here?

Clue or Cluedo (presumably to make it sound more like Ludo) is a game set in some imagined past (probably the end of the 1920s), where there is a range of stereotypes and blatant sexism going on. The three male suspects, Colonel Mustard, Professor Plum, and Reverend Green, all have official titles; whereas the three female suspects, Mrs White, Mrs Peacock, and Miss Scarlett, all do not. They are reduced to being, the domestic, the old lady, and the bright young thing.
If were going to update this for a modern audience, it would be Dr White, Major Peacock, Governor Scarlett, with Sir Mustard being reduced to that of a dumb sports player. Major Peacock would be in the Air Force (or whatever the equivalent rank is). None of this explains why the Reverend Green was defrocked for an American audience.

Because I have grown up in the last burning embers of the British Empire, Cluedo sits in the imagined land of the stereotypical English village. For British people though, this isn't really a stereotype as small villages like this are plentiful. For Britain, this is just a reminder to the past. Nevertheless, the idea that you have a collared member of the clergy in a board game, fits the aesthetic perfectly. We need no backstory of why anyone is there, and in the case of the Reverend Green, we don't need to know if he is Catholic or Church of England².
I simply do not understand the implied cultural overlay which we are supposed to bring to the American version of the game. If this is an old money house in New England, then I don't understand why there aren't members of the clergy. If this is vulgar new money out in a California mansion, then I still don't get why the titles still fall on two of the men, other than for reasons of sexism.

I imagine that Mister Green is supposed to be some kind of industrialist businessman. I immediately think of Henry Ford II, who inherited what was then the second biggest company in the world and was as equally ruthless as his father (though probably not as blatantly anti-Semitic). Even so, why is this Mister Green the industrialist and not Reverend Green?

I married an American lady who it must be said is comprehensively more intelligent than I. I know for a fact that she grew up in a world with cross cultural pollination across the great divide of the Atlantic Ocean.
Also, I think that we are the sort of people who were the expected audience and if people like us have no problem with watching television with subtitles, then seeing a Reverend in a board game is not exactly that much of a culture shock.
What I also don't understand is that by the time that Cluedo was invented, the great detectives of literature, of Sherlock Holmes, Father Brown, Encyclopedia Jones, Hercules Poirot, and Miss Marple, had already been in print. Again, the people who play board games are probably also likely to have read books and if Father Brown who was an Catholic priest was already known as a detective, then the Reverend Green as a stock character is not particularly out of order.

I do not understand why this choice was made nor why it was necessary. I also find it weird that a country which has freedom of religion enshrined in the Constitution, should play this as a sensitivity in this way.

¹I do not think that Bono was singing about Tokyo though.
²You must have tea and cake with the vicar or you DIE!