I know that this on first hearing is going to sound utterly stupid but I believe that I have a way to save the US Government billions a year and get people to spend more money, thus driving the retail  engine room of the economy harder.

1. Kill the Penny, Kill the Nickel.
My maths (yes I don't live in the US, so I am perfectly aware that math in the US is an uncountable noun, which is ironic) tells me that with a copper clad nickel penny, it should cost roughly 2.4c to make. For every single penny that the US Mint makes, it does an amazing magic trick and makes roughly 58% of its outlay disappear.
The nickel which is a five cent coin, costs almost 11c to make. Again 54% of the outlay is magically destroyed, never to be seen again.

It gets worse. The penny is estimated to cost roughly 1.4 cents to handle in a transaction. Even more worse, about 95% of all pennies are only fourfold use. They make a trip from a bank, to a shop, to a wallet, to a shop and then back to a bank when they are destroyed. Billions if not trillions of the little brown parasites spend years in jars in people's homes, before they're all taken back to a bank and then destroyed.
The tale isn't that much better for the nickel which has on average fifteen uses but eventually it too usually ends up in some hoard before being taken back to a bank and then destroyed.

An US Penny: commemorating Captain America or something.

If the penny and nickel were both killed forever, then the US Mint wouldn't be literally throwing billions of dollars away for something which in practice, people find annoying anyway. In my travels across the US, the only real use I ever saw for the penny was in "spend a penny, take a penny" trays so that people could feel community minded and for the tail end of tax on purchases which for some reason that I quite frankly fail to see, isn't included in the price of the goods you've just bought. For an outsider it is pure madness.
I think that by killing the penny and nickel, millions could be saved in productivity and time could be spent doing something more useful like idly chatting to the shopkeeper.

2. Kill the Dollar Bill
Possibly the same reason why the penny and nickel haven't yet been sent to the currency graveyard is the same reason why the US Dollar Bill hasn't also been sent there - sentiment.
Almost every dollar bill that I ever saw, was either beat up to the point where you couldn't use it in a vending machine, or was less than a month old. The average life of a cotton fibre banknote is about seven weeks or so the Reserve Bank of Australia tells us in their website for polymer banknotes. I regularly find coins in change from 1966 which was 46 years ago.
Before I contradict myself and point out that the penny is a coin, may I remind you that at just 5% which is a fairly conservative rate of inflation, the US Dollar now has the same buying power of less than a cent of 100 years ago. This is important.
People are strange creatures and although economics likes to assume that they're rational beings, the truth is very very different. There exists a phenomenon called the "Denomination Effect" which says that people are more likely to spend smaller units of currency. There exists a sort of strange inhibition to spend a fifty dollar note which doesn't really happen with a five or a one. It also extends to coins and notes. Curiously people are more inclined to spend a coin as opposed to a note, even if the two are of identical value. 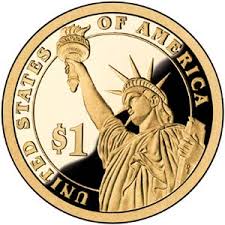 Lady Liberty: Incensed by the waste

By switching to a Dollar Coin and to keep ten billion dollars in circulation, even if you assume a 3% loss through damage, loss or hoarding, for five years you only need to produce 11.6 billion coins. To keep ten billion dollars in notes circulating over the same period requires the production of 37.1 billion banknotes. Admittedly this is also true for the five and ten dollar notes so only sentiment holds them back as well.

In December 2011, Secretary of the Treasury Timothy F. Geithner directed that the United States Mint suspend minting and issuing circulating Presidential $1 Coins.   Regular circulating demand for the coins will be met through the Federal Reserve Bank's existing inventory of circulating coins minted prior to 2012.
- US Mint Website, as at 13th Nov 2012
http://www.usmint.gov/mint_programs/$1coin/index.cfm

Then What?
Would either of these policies lead to inflation? The experience of Australia, New Zealand, and Canada only this year which ditched its one (and two) cent coins would suggest that the overall impact of such a policy would be almost negligible.
Generally the main use for pennies, nickels and dollar bills is for low valued transactions anyway. Transactions like these are almost exclusively for consumable items, so by spinning those wheels of the economy faster, in theory it should create a small bump in overall consumer spending, which is after all the very point.

As for sentimentality, I don't really know if Mr Lincoln would be very happy about having his face on something which is seen as an annoyance; Mr Jefferson fares not much better with his face on the nickel and Mr Washington would probably object to the fact that his face is constantly being beaten up on the dollar bill. Only Ben Franklin who is smugly smiling away on the hundred appears happy with his lot.