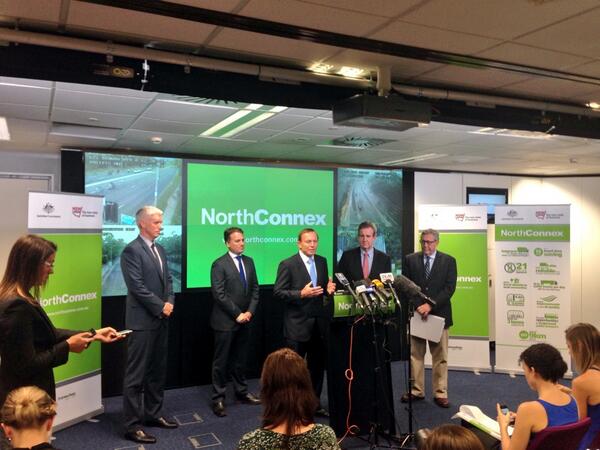 - via Twitter, Jamie Briggs, Federal Member for Mayo and Assistant Minister for Infrastructure and Regional Development.

At the weekend, the member for Mayo, Jamie Briggs; the Prime Minister, Tony Abbott and the Premier of New South Wales, Barry O'Farrel, all congratulated themselves for concluding a deal to complete the M1 extension to the M2, and have it opened by the year 2019.

The NSW Government's website was also showing itself off like a peacock, to display how incredibly pleased the Government was with itself:
http://www.nsw.gov.au/news/northconnex-motorway-gets-agreement
The NSW Government has reached an agreement with Transurban and the Westlink M7 shareholders to deliver the NorthConnex motorway – twin nine kilometre tunnels to link the M1 and M2 under busy Pennant Hills Road.
In March 2012, the NSW Government received an unsolicited proposal from Transurban and the Westlink M7 shareholders to design, build, operate, maintain and finance NorthConnex.

On 30 May 2013 the NSW Government announced the proposal had progressed to Stage 3 of the unsolicited proposals process, which would include a competitive tender to select a design and construction contractor.
The $3 billion project, consisting of a construction budget of $2.65 billion in addition to land and project delivery costs, will be funded through toll charges with a contribution from the NSW and Australian Governments of up to $405 million each. Car and truck tolls for NorthConnex will be aligned with the M2, which currently are $6.11 for cars and $18.32 for trucks.
- NSW Government website, published 16th Mar 2014.

How lovely.
Assuming that this piece of infrastructure is completed at the 2019 delivery date, it will have been only 68 years after the original County of Cumberland plan was first announced in 1951. To put that in perspective, that plan was announced during the Premiership of Joseph Cahill who was also responsible for destroying the then biggest tram network in the world and naming a very poxy little "expressway" after himself.
It was also before any of the men in that photograph were even born.

Don't believe me? Have look at this:

http://trove.nla.gov.au/ndp/del/article/18215215
The Federal Government re-fused to contribute towards the cost of putting the plan into operation, but the State Government decided to share the cost with local government.
Primary intention of the plan is to improve the living and working conditions of the 1,850,000
people in the 1,630 square miles of the County of Cumberland, which is bounded almost entirely
by the ocean and the Hawkesbury-Nepean Rivers.

In the 11,000 factories within this area are employed more than 250,000 men and women-a third
of Australia's industrial labour force.
The council's planners estimate that in 25 years immigration and natural increase will have brought
the county's population to 2,250,000, of whom 950,000 will be workers.
They say that radical changes are essential to remedy the county's worst faults, congested employment and living areas, inadequate housing and recreational space, slums, and snarled traffic.
The plan provides for:
More express highways which will case traffic congestion.
- Page 2, Sydney Morning Herald, 26 Jul 1951

One of those expressways mentioned in the 1951 County of Cumberland plan was the Lane Cove Valley freeway and remarkably, some of it was even completed. This photo of a proposed plan from the Ozroads website, gives an idea of where the expressway might have run:

Fig Tree Bridge is the next bridge north on Australia's second ever expressway. The Cahill Expressway was opened in 1958 but the section around the Gladesville Bridge which was opened in 1965, makes up just under 3km of the Lane Cove Valley freeway; with the rest never being completed.

So then, you might think that I'd be happy that an expressway coming in at 68 years behind schedule is finally being completed (although I will admit that it just happens to run through the middle of the Premier's own electorate of Ku-ring-gai) but I'm not really.
There are two statements which are included on the NSW Government's website which make me livid.

Firstly that:
Car and truck tolls for NorthConnex will be aligned with the M2, which currently are $6.11 for cars and $18.32 for trucks.

But more importantly that:

The $3 billion project, consisting of a construction budget of $2.65 billion in addition to land and project delivery costs, will be funded through toll charges with a contribution from the NSW and Australian Governments.
but curiously:
In March 2012, the NSW Government received an unsolicited proposal from Transurban and the Westlink M7 shareholders to design, build, operate, maintain and finance NorthConnex.

Let me make this abundantly clear. The road will be funded by taxpayers but the road itself will send profits to Transurban and Westlink M7.
Privatising profits but yet making debt public. In the olden days we might have called that Lemon socialism, Crony capitalism or perhaps Corporate welfare.

But there's a problem. The Treasurer Joe Hockey who presumably is the chap in charge of the public purse of Australia, went on the attack of what he called "the age of entitlement"

http://www.joehockey.com/media-files/speeches/ContentPieces/100/download.pdf
So, ultimately the fiscal impact of popular programs must be brought to account no matter what the political values of the government are or how popular a spending program may be.
Let me put it to you this way: The Age of Entitlement is over.
We should not take this as cause for despair. It is our market based economies which have forced this change on unwilling participants.
- Joe Hockey, Address To The Institute Of Economic Affairs, 17 April 2012

Only this year he said that it was clear that taxpayer handouts are under "tough restrictions".

http://www.news.com.au/finance/economy/joe-hockey-warns-australians-the-age-of-entitlement-is-over/story-e6frflo9-1226816598949
Treasurer Joe Hockey has warned that the age of entitlement is over and it was time for all Australians to do their fair share of heavy lifting.
Making clear taxpayer hand-outs are now under tough restrictions, Mr Hockey told ABC Radio that the age of personal responsibility has begun.
-The Daily Telegraph, 3rd Feb 2014

Yet when I tweeted the Premier, asking what the actual purpose of paying road taxes are, for a road which because I don't have an e-toll account, I'm for all intents and purposes barred from I get told:


@rollo75 @BriggsJamie @TonyAbbottMHR and happily that is the choice you have.
— Barry O'Farrell (@barryofarrell) March 16, 2014

If the "age of entitlement" is over, then why are my road taxes and income taxes being used to fund private profits? The Federal Government has already made it abundantly clear with Holden, SPC and Qantas that it isn't going to. Why then does the principle not apply to a toll road?

If this really is a piece of infrastructure, then why isn't it free and open to all who pay taxes? Why was it good enough to build a road like the Hume Highway and make that free and open but not this? Why in principle should any road have a toll on it, if it isn't for the feathering of Mr O'Farrells nest once he leaves politics? Remember, former Premier Bob Carr landed himself a cushy job at Macquarie Bank after committing the NSW to so-called "public private partnerships".
It's a little bit hypocritical that the same MP who called for a judicial inquiry into the privatisation of NSW's state's electricity assets in 2010 would then approve the same of same just two years later. I suppose that he's just getting the jump early with this by privatising the profits on the M1 extension before the process starts.

North Connex is a project which is running 68 years behind schedule and has a side order of Corporate welfare to go with it.
Don't frame it as a "choice".