There is a strange sort of hypocrisy in the world and it is most evident in commercial media and especially among rich people. One of the popular narratives which is frequently told, seemingly without question, is that everybody who receives any form of welfare payments from the government is a bludger and a parasite. The inference that we're all supposed to draw from this is that the government should stop time funding these people and get them off of welfare because they are unproductive.
The latest barrage of attack the war on welfare has to do with drug testing for recipients of unemployment benefits and other disability payments. While I agree that the government has the right to make sure that the money is being spent prudently and wisely, the people who turn to drugs as a pitiful form of self medication, usually do so because their lives are otherwise awful. However, instead of treating this as a public health problem, spending on treatments and health care to sort this out is being cut at the same time; which means that the propensity for someone on drugs to find help and get off them is reduced. If this be the case, they are more likely to turn to drugs to self medicate. This is obviously a cruel cycle and the government wants to wash its hands of it.

I want you to imagine a very very small bank; I mean really really small. This bank is run by a ten year old boy named Will and operates on a table out the front of his house. This goes right back to the beginning of banking, where even the word "bank" itself is derived from the old Italian "banca" which also means a table or bench. If it helps, think of something like Lucy Van Pelt's booth from the Peanuts comic strip. 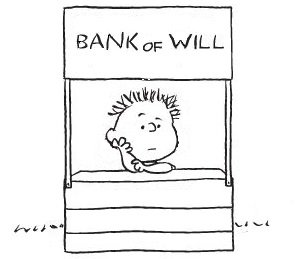 If we scale this up by a factor of literally billions, then although we might have said that Will is a little punk who doesn't really work to make a profit, we're perfectly fine with the concept that banks pay us back not 3 cents for every dollar that we have given them for safe keeping but 3 cents for every thousand dollars that we have given them. We're lucky to get 3 cents back. Worse, if you're like most people, the banks will charge you what amounts​ to rent for having your money live with them. They are still perfectly fine with making other people pay back 6 cents plus every dollar that they have borrowed; maybe 20 cents or more if they have borrowed money through the magic of credit cards.
It seems that we're also perfectly fine as a society for the entire financial system to live in the gap between the difference between the rates of what they give us for keeping our money for safe keeping and collecting more from the people who have borrowed from them.
Essentially the entire financial system doesn't produce anything of actual value but lives in the gap between the charge out and charge in rates of interest. Just like the very very small Bank Of Will, big banks mostly don't care about what borrowers do with the money as long as they are able to pay it back plus however many cents plus every dollar that they have borrowed. Also just like the Bank Of Will, that money is paid back by people having to do real work in the real world. Now tell me who the bludgers and the parasites are.

If all of the economy was being run as a single business entity, in one massive shopfront. If we believe the narrative that people on welfare payments are bludgers and parasites, then we should perhaps immediately not include people who are paid the old age pension: after all, these people have already put in a lifetime of work. If you also not include those people who have genuine disabilities and who are unable to work, then the actual number of proper bludgers and parasites is about 2% at an overly stated estimate. A shop that has theft of 2% would find that troubling but not necessarily outrageous. If you look at the ASX200 and see what proportion of the economy is made up of an entire sector of bludgers and parasites, who in essence live in the gap between the charge out and charge in rates, then apparently that doesn't seem to trouble us and yet that is an entire sector who not only lives off of the proceeds of "other people's money" but "other people's work".
But as long as we keep punching down on those people who turn to drugs as a way of self medication, instead of treating the problem as a public health issue, then that's fine. What a bunch of bankers we all are.
Posted by Rollo at 11:35