In my grand history of picking elections, I am going to make yet another prediction which I fully expect will be wrong but because it is based on data, will be accurately wrong.
As Nate Silver's website FiveThirtyEight¹ proved in 2016, all of the best statistical data in the world is no match for the utter bewildermouse that is the general public. I don't have access to anything like the statistical dumpster fire of data that he does and so I used far more crude tools.

In Australia and Britain,  electoral swing analysis works by adding one party's increase in share of the vote to another party's decrease in share of the vote and then by dividing the total by two. In Australia it gets a little bit more complex because we have multi party elections but generally speaking where you have two party politics, the system is simple enough to calculate.
After looking through the polls, you then look at the margin of votes in all seats and line them up. Having done that, you simply point your marker at the seat that corresponds to that swing value and then count the number of seats.
There are of course several major assumptions which are of course wrong. Firstly, it assumed that the swing across the country is uniform. Secondly, it assumes that all seats behave according to that same uniform swing. Thirdly, it assumes that all demographics will act according to predicable models. These assumptions are wrong but we'll proceed anyway.

I have been throwing results into a very big spreadsheet and compared poll results² to the actual results of the 2016 election. Wikipedia is lovely and has recorded every single congressional district and so there are results for all 435 voting members. From here, generated a standardised predicted swing for the country; which at the moment has closed at 6.02%.

A 6.02% swing would produce a House as follows:
229 - Democrats
206 - Republicans
This would mean that the House would again be Democrat controlled.

If you look at the Senate, in the available seats that are on offer, a 6.02% swing would produce a result as follows:
48 - Democrats
2 - Indpendents
50 - Republicans

This would mean that the Senate would remain Republican controlled.

As for the very big question about the impeachment of the 45th President, the House could set the terms of impeachment because all it requires is a simple majority of those present but the Senate requires a two-thirds super majority. There is no way in any possible scenario, even if the Democrats won all 435 House seats and all of the available seats in the Senate that they would get close because 42 Republicans are not up for reelection this time around.

Based on the above results and extrapolating the results for the electoral college, we get the following results: 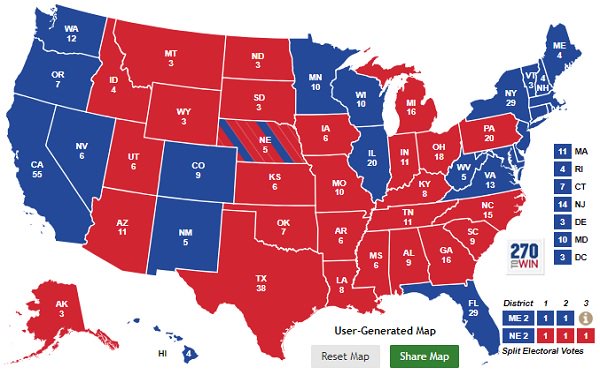 Plugging all of the available data into 270 to Win³ (even accounting for winner-takes-all states and split votes), then the hypothetical 2018 Presidential Election would mean that a Democrat would get 279 votes to Republican Donald Trump's 259 and assuming that he somehow won the Republican primary.
These are my predictions for the 2018 US mid-term elections and for a presidential election which doesn't even exist. Watch as on Tuesday in America, I am proved wrong by the real world not conforming to predicted data, yet again.