The current resident of 1600 Pennsylvania Avenue has the rather annoying quality of being able to suck all of the oxygen out of the room when it comes to the news cycle, and while we're in the midst of the worst run administration in decades it can be tempting to think that democracy is broken. Of course I have serious problems with the way that the United States' government is constituted and I think that it is telling that precisely zero other countries use the model (because it is a bad model) but that is another question.
Setting aside the bluster and nonsense, if you actually look at the data and compare it to the long term trends, then Donald J Trump actually ceases to be all that surprising.

One of the fun experiments that you can run in a mid term year is to see if the president would have retained the presidency. I know that it sounds daft but you literally have a data set with which to run the experiment with, by virtue of having just collected the data. I realise that it isn't exactly perfect but as five-thirty-eight showed before the 2016 election, if you are trying to predict the future by looking at opinion polls which are by nature incomplete, then you will be disappointed when the expected result doesn't come out. However, if you predict the present with a complete set of data, which is what the midterms are, then you will be disappointed in an entirely different way.

We can generally assume that that turnout for a presidential election is higher than for a midterm election. We can however kind of correct for that a bit by making the assumption that the Senate election is a bunch of new people who didn't vote in the House election. Yes, I know that it is wrong but its the best that we're going to get.
All we have to do is take all of the votes for both the House and Senate on a state by state basis and treat them as though they were votes for the President. Since there are already votes for the 50 states plus DC, then you just have to plug the results into the electoral college (taking careful note of those states who don't use a winner takes all basis) and then run the game out. I looked at 51 sets of results and they spat out this: 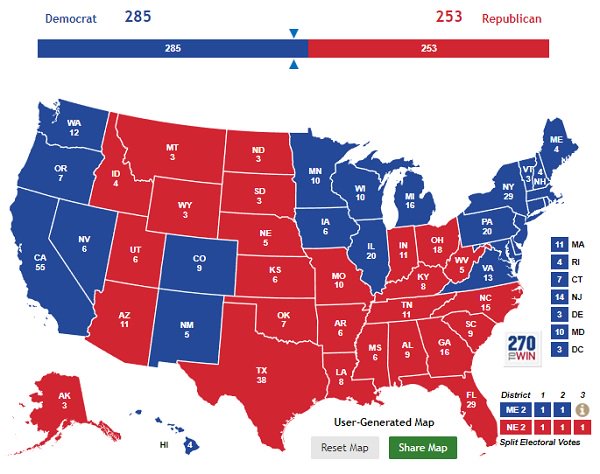 What we find is that if the midterm election in 2018 had been a Presidential Election and that a midterm is a referendum on the President, then Jo Sample running for the Democrats would have beaten Donald Trump. This fits in with the general narrative that it was expected that any Jo Sample would have beaten Hillary Clinton in 2016 and any Jo Sample that wasn't Hillary Clinton would have beaten Donald Trump in 2016. The fact that you had the two most unpopular candidates running against each other in US electoral history made predicting the election difficult and five-thirty-eight's 'incorrect' prediction was totally justified.
What we find is that over the long run, 2016 is something of an anomyly. From 2000-2012 there are four states which blink either red or blue which swing elections; Ohio, Florida, Colorado and Nevada. Trump carried Wisconsin, Michigan and Pensylvania by the barest of margins in 2016 and those three have reverted back to the long term trend of being nominally blue for the 2018 midterm.

The visceral reaction of contempt for Donald Trump did result in a larger degree of turnout at the midterms by voters of both sides but I don't think that that necessarily does anything for the political weather map except turn the pressure. As with any large pressure cell on a weather map, if the winds are blowing one way as the system passes they will blow the other way when the other side arrives. In the case of Donald Trump, I don't see him as anything other than a very high pressure system that comes and goes. I hope that there's been enough of a foul miasma in the air that come January of 2020, that rank and file Republican voters who vote in the primaries, eject this fug before he gets to the general election in November.

This is why I think that Trump is really not that exciting as a political candidate. If a Jo Sample would have beaten Hillary Clinton in 2016 and the midterms shows that a Jo Sample would have beaten Trump in 2018, then the political needle has in fact swung nowhere in the long run. That's kind of important because I don't see any road to impeaching Trump before 2020; which means to say that if by some hitherto unknown reason Trump manages to win the 2020 primaries, then I suspect that any Jo Sample would beat him in 2020. Any Jo Sample except for Hillary Clinton, that is.
What I really don't understand is why people continued to select Donald Trump and expect to get good government. People like Marco Rubio, Ben Carson, and even Jeb Bush, might have had politics that people don't like but they were at least competent to do the job. I bet that any of those people would have beaten Hillary in the election and by exactly the same margin.

I don't really think that there's a lot to worry about when it comes to dismantling his legacy because the 115th Congress has been somewhat quiet and the 116th Congress is almost certainly destined for a gridlock situation. The administration starting from the Oval Office and all other positions downwards has been so incredibly inept, that they haven't really achived anything of note. Once you remove the colour of the personality of the man himself, his administration is lacklustre and in the grand scheme of things, doesn't radically alter the grand narrative.
As for the suggestion that democracy is broken, which has been touted by various political commentators, all that proves is that the method of selecting the executive is badly constituted and I think that any other reasonably well thought out political system would have long removed him by now.

It's also telling that in this scenario, the difference is 32 electoral college votes; which means to say that if the 29 votes of Florida swing in the other direction the map turns into a red result.
Posted by Rollo at 07:17