https://www.supercars.com/news/bathurst12hour/de-pasquale-explains-illegally-fast-bathurst-laps/?sf207114923=1
Anton De Pasquale has had his two quickest times in Bathurst 12 Hour qualifying deleted, having gone below the permissible benchmark time for his MARC II V8 entry.
As part of their eligibility for the Invitational Class at the event, the purpose-built, Australian-made cars are allowed to lap no quicker than 2:05s during any session.
Erebus Supercars driver De Pasquale clocked a 2:04.7910s and 2:04.2585s on consecutive laps in qualifying, before finishing his run with a 2:05.3653s.
- Supercars.com.au, 3rd Feb 2019

I want to take nothing away from the Earl Bamber Motorsport team, who with their three drivers Matt Campbell, Dennis Olsen and Dirk Werner, took their Porsche 911 GT3 R to victory in the Bathurst 12 Hour yesterday. Endurance racing is in my opinion, the pinnacle of team motorsport and anything over 500km is a test of machinery. To even survive 12 hours is a feat unto itself.
But something deeply bothers me about the regulations of the Bathurst 12 Hour. It is mostly a mix of GT3 and GT4 cars, both of which are run to a set of international regulations, and then there is an invitational class which as the above article indicates, are deliberately hamstrung so that they have no chance of winning anything.
That's stupid.

Although in race trim, the fastest race lap was only 2:03.53 by Josh Burdon in the Nissan GT-R GT3 on lap 300, the fastest qualifying time was 2:02.93 by Raffaele Marciello in the Mercedes-AMG GT3. That means that the MARC II Mustang V8 would have qualified a lowly 25th had it been allowed to; that still isn't really fast enough to bother the faster cars, let alone even challenge for a race win. I just think that arbitrarily imposing a limit of 2:05 is really really churlish.
It also speaks to a far far deeper problem that we have in Australian motorsport generally.

Since 2017, when the last VF Commodore rolled off the Elizabeth production line, there have been no cars manufactured in Australia. Well, I say none but I don't actually know because there could have been cars made by garagistas somewhere but the point remains that we do not have a motor industry any more.

Because we no longer have a motor industry any more, the capacity to produce race cars, which itself is only a very minor secondary market in the grand scheme of things, has been severely reduced. It is no longer possible as was the case with a Commodore, Falcon, or Camry, to get a shell before it went through the rest of the production process. Impressive race cars are almost always purpose-built anyway, but this just makes the job that much harder.
It also doesn't help that if we want to run a race and have the rest of the world turn up, we need to run to a set of international regulations. The result of that is that virtually every single race car which competes in a race like the Bathurst 12 Hour, is imported as a complete car, which is fine I suppose, except then you end up with this sort of thing happening.

In 2010, the GT300 category in Japan's Super GT series, found that an increasing number of teams chose to buy European GT3 cars instead of locally produced cars. In response, Super GT introduced the JAF-GT class and even went to the effort of making a "Mother Chassis" available; as well as an unbranded engine which was a Nissan VK45DE V8 in everything but name. As a result, we have ended up with some truly wonderful cars in the class over the years including the bespoke Mooncraft Shiden, a Toyota Corolla AE86 which had a V8 in it (the chassis was 20 years old), and even a Toyota Prius running the 3.6L V8 from the GT-One Le Mans car which was then mated to the Prius Hybrid system. It is gloriously delightful and proves that if you design a set of rules properly, then loveliness can happen.
Super GT openly admits that it runs a racing series and that it deliberately hamstrings cars as a disincentive for teams to win the series by throwing money at it. Super GT runs quite a very strict Balance of Performance regime.
But we refuse to do that in Australia. Nope. We hate it.

The FIA already runs a set of Balance of Performance regulations which fiddles with power and weight, as well as aerodynamics and things like fuel restriction, which like Super GT are designed to stop a manufacturer from running away with it. That's fine but the problem in Australia is that we have no domestic manufacturers anymore; so all work to homologate a car to be competitive in a GT3 race, has to be done independently, which is functionally impossible.
Mosler Automotive which ran the MT900 tried to get a GT3 version of the car homologated by the FIA but were told that because there were no road going production versions, they would not be allowed to. A Mosler was allowed to run in the invitational class in the 2011 Bathurst 12 Hour but it only lasted half an hour. It never returned. Therein lies a problem. 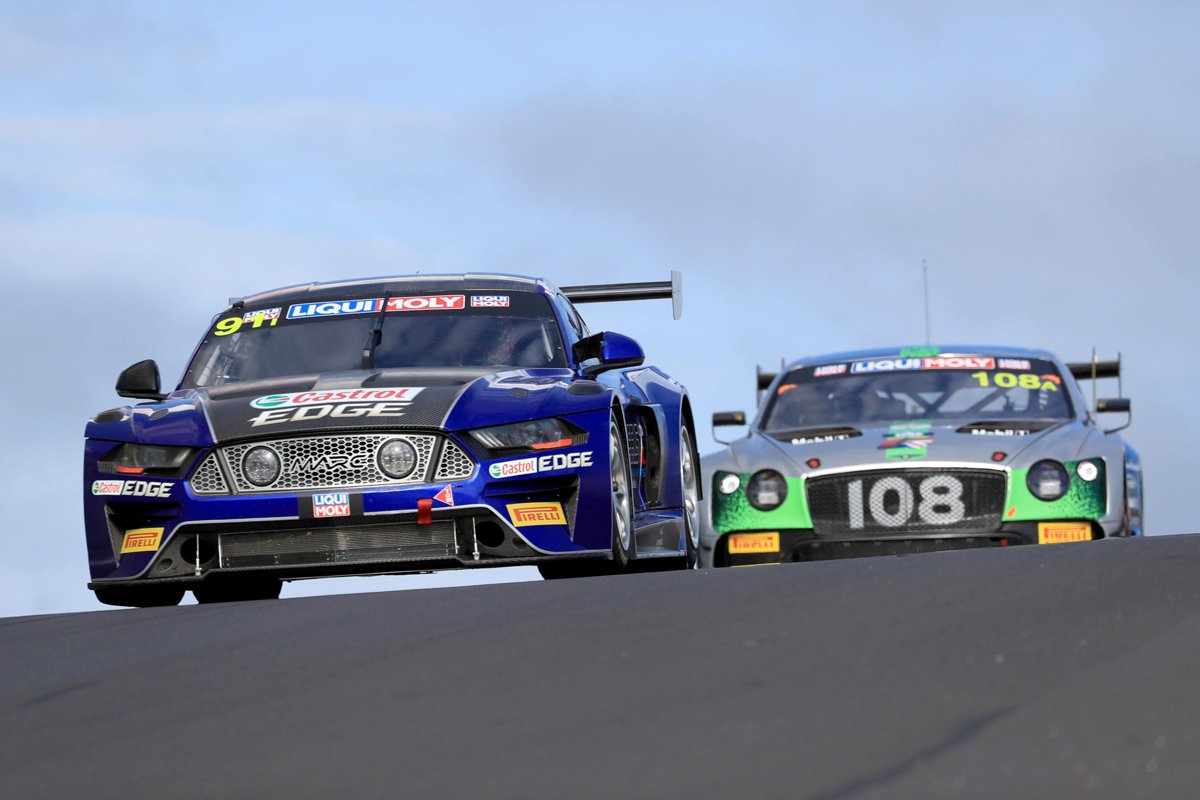 Instead of letting the MARC cars actually race, CAMS uses the bluntest of blunt instruments and has simply decided to penalise the MARC cars if they are even close to being remotely competitive in the series. During the rest of the year, it neither knows how to rate them, not cares to do so, and puts them into the Sports Sedan category. Meanwhile, the Australian GT Championship which is open to to FIA GT3 cars, runs almost exclusively second hand machinery from overseas and because there is no longer any domestic automotive manufacturing, that's really all it can ever hope to be.
If I was Grand Poobah and Lord High Everything Else, then I'd have CAMS and the Bathurst 12 Hour adopt a set of regulations which actually encouraged garagistas to build equivalent machinery to GT3, in the same way that the JAF does in Japan. I would love if a standard Mother Chassis was developed and although we probably wouldn't use the debranded Nissan VK45DE V8, we probably would allow racing crate motors provided that they came from the same manufacturers as the cars. If I had unlimited dollarpounds then I can imagine running the 2.5L SKYACTIV-G Turbo  in-line 4 from the Mazda CX-9 in a Mazda 6. Most of the aerodynamics are standard anyway and if need be, a Mother Chassis underneath would be cool.
I would also have CAMS get off their high horse and actually let MARC unleash their horsies. Provided their Mustang/Focus/Mazda 3 were GT3 or JAF equivalent, then why shouldn't they be allowed to race. I would want to encourage this sort of initiative. I mean have you heard a V8 Mazda 3 go around? It's genuinely lovely.

I want to see how an Australian engineered car would go against the rest of the world. It is bad enough that Detroit decided that they didn't like employing Australians anymore, it adds insult to injury that our own confederation of motorsport is too stupid to let Australians play in their own backyard because they can't work out how to do it; despite the fact that the problem has already been solved overseas.
Posted by Rollo at 07:17