I do not have children and so I am not particularly inclined to want to watch ABC 3 of my own volition. Having said that, I think that having a dedicated television station for children on free-to-air is a brilliant idea as I can not imagine that any small child would be particularly interested in the continuing adventures of ScoMo the Scotty Dog and his mate Spud Dutton and they face the evil Blue Shovel in the green room of death.
My only contact with ABC 3, is standing in the queue at the bank, which thanks to the big banks policies of cutting front line staff, makes you wish that you were actually dead; which is no longer a barrier to them charging you fees for advice.

I have no idea what the theme song to Paw Patrol actually says and to be honest, I don't think that I particularly care. I have now seen probably about a dozen full episodes of Paw Patrol while standing in the queue at the bank, and not even once has the audio been clear enough for me to hear the dialogue properly. Being from TV Ontario, everyone is probably speaking English but they may as well be speaking French for all I care. 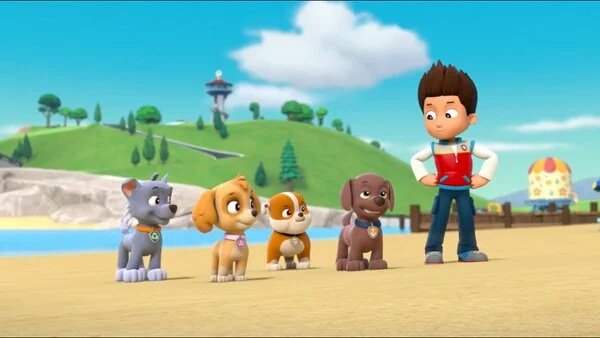 The puppies themselves appear to be some kind of parody of the Village People, with a fire fighter, a builder, a policeman etc. who then go out and fix whatever disaster happens to be the plot device for the episode, wherein they are rewarded with a treat and presumably the boy if financially recompensed because I can think of no other reason why a boy has a giant hamburder tower thing in a town. This is very much like looking upon Barad-dûr, Fortress of Sauron, because when I gaze upon it, all hope leaves me.

I don't know what lessons if any that PAW Patrol, PAW Patrol, yaba-da-daba yaba-da-daba is supposed to teach me but the only thing that I take away is that it is a cautionary tale against the gig economy. The town appears to be clean but there are only about 10 or so people who live in it and the town's services are handled by the boy who contacts the puppies by some sort of shock collar thing.
It seems obvious to me that the boy has the eventual aim of replacing the puppies with robots, as he has already built a robotic dog, who I can only assume will in time take their jobs as well.
Maybe the lesson that I am supposed to take away is that if you let a kid get away without any parental control (seriously, why is a boy even allowed to have a puppy army?), then they turn into a tyrant.

Also, if you are an adult who can not control a pet chicken, maybe you should consider getting a coop.