Horse 2531 - The Arrest Of Julian Assange

As most Australians were going to bed last night, Australian citizen, fugitive, embassy malingerer, and in the eyes of the US Government, troll terrorist, Julian Assange, was arrested by British police after the Ecuadorian Embassy in London decided that they'd had enough of him and withdrew their cloak of asylum and protection.
Assange who was originally holed up in the embassy to evade rape charges that were being made by two Swedish ladies, has been arrested in response to charges made by the US Government on matters relating to WikiLeaks receiving of loads and loads of stolen US Dept of Defense documents and in connection to Chelsea Manning, who leaked them. She served seven in military prison for leaking classified data, and was sentenced to 35 years in prison before having this commuted. 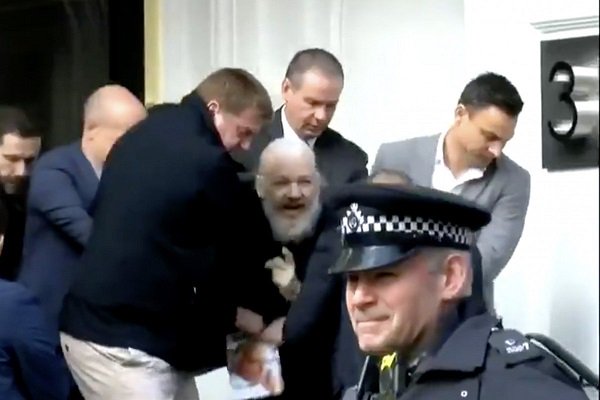 I haven't read through the arrest warrant in full but it appears that Mr Assange has been charged him conspiracy to commit computer intrusion and this would normally be given a maximum penalty of five years' prison but given that the US Government has had roughly seven years to come up with a set of appropriate charges, I bet the only way that Assange could be found not guilty, is if it was suddenly announced that Sheol and Hades were jointly hosting the 2026 Winter Olympics. There is no way in either of those places that Assange would be able to escape a not guilty verdict if the prosecution has done its job properly.
Probably Assange would try and mount a defence that he is a journalist and there would be questions relating to whether or not that is materially true but that assumes that he will even get anything approaching a fair trial and herein lies the problem.

The United States has a proven track record of arresting people and dumping then at the detention centre at Guantanamo Bay. Assange's well founded fear in the first instance, while there were still charges of rape hanging over him by the Swedish authorities, was that as soon as he landed on the tarmac in Sweden, he would be arrested and taken straight to Guantanamo Bay.
In the case of fellow Australian citizen David Hicks, not only was there no charge to begin with but the thing that he was finally charged with was invented under a law which wasn't in existence at the time of his arrest and was applied retrospectively. If you can find it, there is a very good account of this whole affair by ABC Journalist Leigh Sales, called 'Prisoner 002'.
The legal ambiguity of Guantanamo Bay is one of the most delicious pieces of legal fiction for the United States. As it isn't on United States' soil then the courts have held that not all of the US Constitution applies, which also happens to include the due process clauses of the 5th and 14th Amendments. Also as the United States is not a signatory to things that it does not like (claiming that its own constitution is the highest law in the land and therefore it shouldn't be bound to international law or foreign conventions such as the Universal Declaration of Human Rights and the Refugee Convention), it is perfectly fine with carrying out 'advanced interrogation' on people, which is a delightful way of excusing the use of torture.
For this reason, Julian Assange has had some very real fears about what would happen to him if he ever left the Ecuadorian Embassy and it will be interesting to see what happens next. Whatever does happen, you can rest assured that the Australian Government will continue to act on its current policy of doing exactly nothing when its citizens face trouble overseas, including when that trouble includes the threat of torture and/or the death penalty; especially when it is carried out by the United States with whom we have a military treat which binds us to be complicit and willing partners in whatever foul designs that the United States has around the world.
I'm not willing to comment on whether or not Julian Assange is actually guilty of crimes that I don't yet understand but I can guarantee that he will be found guilty. I personally think that he is something of an agent provocatuer and a ratbag and that he should have absolutely expected that this day would come. It has all the inevitability of the 07:04 express train to Redfern striking an egg which has been glued to the track - the train might be delayed but it never turns out well for the egg.

The defence that Mr Assange would mount in court (if it ever gets to one) would be the defence that a journalist should be allowed to receive material, even when it is of a sensitive nature and could possibly threaten national security. I don't know if what Julian Assange has done with WikiLeaks constitutes journalism or not (I suspect not) but when or if he is found guilty, it sets up a very dangerous precedent which would extend the United States' ability to prosecute any journalist in the world, in countries with which it has extradition treaties with, and given that they would be arrested on foreign soil, then the due process clauses of the US Constitution would also not apply. That should be enough to scare any journalist who wants to write a piece which part way annoys the United States.

I suspect that the reason why the arrest happened yesterday was that earlier in the day, Prime Minister Scott Morrison announced that Australia will be going to the polls on May 18. This means that Australia currently has a government in caretaker mode and would be even less likely to kick up a stink about one of her citizens being arrested overseas (not that we'd say very much in the first place).
Ecuador has had pressure brought to bear on it by the United States with regards a resolution aimed at promoting breastfeeding at the decision-making body of the World Health Organization, which was withdrawn after the United States allegedly made threats to cut trade and withdraw some military aid. I imagine that this has been part of a long game  and I can only speculate that it has finally had enough of Mr Assange after WikiLeaks published embarrassing things from the Vatican. Moreover, President Trump is actively pursuing a program of belligerence as a show of strength and this has been reflected in his attitude towards Mexico, Central America generally, and the re-election of Benjamin Netanyahu in Israel, merely helps to maintain the strongman image.
This is a public relations triumph for President Trump because in Julian Assange you already have a premade villain who looks buckwild weird and so the visuals of this play well on television (the fact that Anderson Cooper also has white hair also helps the fake news kayfabe). From an operational standpoint, you couldn't have designed an easier boss  in this game of international geopolitical politics. Unlike previous designated baddies for our two minutes of hate like Saddam Hussain or Osama Bin Laden, Julian Assange has helpfully been in one place this whole time.

I think that the reason why this was done now in particular is that the arrest of Julian Assange is one of the greatest storylines that could have been wheeled out as a distraction in case the Congress came close to finding information which might potentially upend the President on matters of obstruction of justice which could lead to impeachment charges, because this in effect poisons the well for anyone within Congress leaking things in future to WikiLeaks. It also acts as a deterrant to anyone who may have leaked the Mueller Report because as of now, the number of people who have access to that report is small and practically everyone who has said access is known.

I'm almost willing to bet that this actually has very little to do with the guilt of Mr Assange but rather the guilt of Mr Trump. I'm pretty sure that if the United States really wanted to have pursued Mr Assange, that they would have before now.
Posted by Rollo at 08:18