Before we proceed, I have to lay down some basic information.
I am forty years old and I do not have any children. I usually find the childrens' television that I am subjected to while standing in line at the bank, both tedious and confusing.
Paw Patrol in particular annoys me to the back teeth and I really have no idea why anyone would want to live in a town with an incompetent mayor and a boy who clearly has far too much money and has amassed his own private unholy army of dogs. Dora the Explorer and Diego both need to go, go, into the jungle and stay there. Fireman Sam which has been CGI'd for the 21st Century, has been rendered both soulless and pointless.

Imagine therefore, the gears in my brain shifting from 2nd to 5th without first engaging the clutch, in a shower of spark and wonderment at a childrens' television program which I found both charming and wonderful. That program is Bluey on ABC Kids and iView.
I suppose that Bluey is the Australian equivalent of Peppa Pig and appears to have been funded in a similar arrangement, with Cebeebies, ABC Kids and Screen Queensland. Bluey is a show about a family of Blue Heeler dogs, living in what is presumably suburban Brisbane or perhaps somewhere else in Queensland. The family is made of Chili (Mum) who is a part time worker at airport security, Bandit (Dad) who is an academic archaeologist and self proclaimed rock star, and the two girls Bingo and Bluey (the eponymous character of the show).
I think that the show is inadvertently a pretty good snapshot of suburbia in Australia in the 21st Century.

Mum is obviously the more capable of the two parents but unlike other television shows, it doesn't lean into the well worn trope where mum is capable and dad is a complete buffoon. This is because he appears to be home more during the day and is making time for his kids. Mum and Dad don't berate each other; they actually appear to like each other; they also like their kids. Basically Chili and Bandit are both winning at parenting.

I suppose that the thing that I am loving the most about this series is that although it definitely has messages like 'be brave' or 'speak up' or 'don't be too rough with your kids', it isn't preachy about it, and celebrates the simple things like going to the park, taking rubbish to the dump, or going the local takeaway shop.
The house that they live in is a two storey house at the top of a hill and at the end of a cul-de-sac, and has both those decorative things above the doors which ventilate the house as well as those peculiar vents that you get at the top of walls only in Queensland and the Northern Territory. This is a show which is grounded in a place that can be nowhere else but unashamedly Australia and specifically Brisbane. 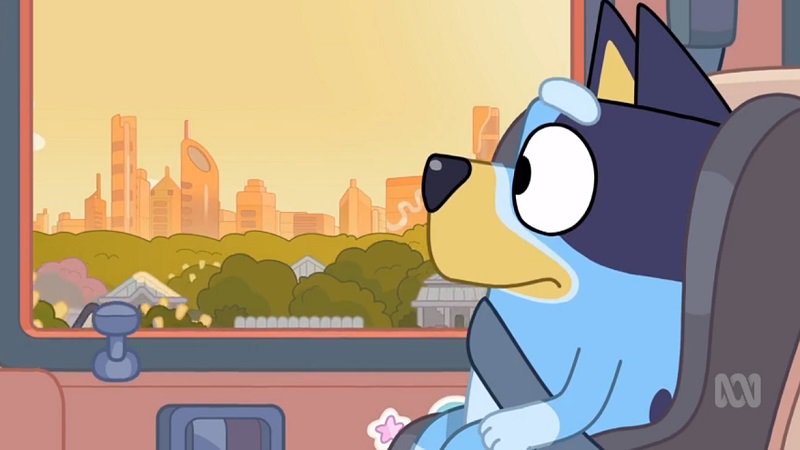 The thing that both 7.30 on ABC 1, or AM on Radio National, or the Sydney Morning Herald wanted to make a lot of noise about was that the show's producers have insisted that when it is sold to overseas audiences in the UK, the US, Canada, New Zealand etc. that it remains intact and that the accents and idioms remain. The show isn't stereotypically 'strayan Australian but it is distinctive enough that it deserves to be respected as is. There's something joyful in the fact that the people who made the thing, take enough pride in it that they don't want it disturbed. We are so used to having television from other countries show up in Australia, that exporting this show is almost a reply of 'we can do this too, you know'. It not only does that, it does it so well that is the most downloaded television show in iView's history and possibly the most downloaded show in the history of television in Australia.

The biggest problem that Australian film in particular has always had is that it has needed to try and be quirky or weird, just to be heard. Australian television apart from soap opera being exported to the UK, almost never goes anywhere else at all other than New Zealand. Bluey tries neither to be quirky or weird because it doesn't have to try. It does the far harder thing of being honest and good. The show looks as slick as anything else in the world and wouldn't at all look out of place in a Saturday morning cartoon lineup at 8am in average America; say on WFYI-TV in Indianapolis (which is about the most average place in America) for instance. Also because each episode is only 7 minutes long, it fits perfectly into advertising schedules.

Of course I realise that I am not in any way the target audience for this show and to be honest, I don't care. My TV viewing contains maths and science and politics and quizzes and Scandi crime drama and politics and sport and now an extra spot of joy.
One of the things that childrens' television does very well that so called grown up television doesn't do is tell stories where the world could be better. Fairy tales are childish but no child has the expectation that that is how the world actually is. The biggest difference between childrens' stories and big peoples' stories is many levels of complexity and the creeping notion that the real world outside is cruel and indifferent to you. That's one of the pre-made lies of big peoples' stories (and also sport), that there are rules and protocols which stories follow and that things resolve themselves in nice endings. That almost never happens in the real world. In an episode of Bluey, there is a minor complication which ties up nicely in seven minutes and while that's obviously not true to life, this is a cartoon and that's fine. The big world outside is going to be cruel and scary but here, wrapping things up nicely in seven minutes and doing it with joy, is the greatest show on television at the moment.
Posted by Rollo at 07:17