Horse 2583 - I Love The Millennium Falcon From Harrison Ford

When the film 'Star Wars' came out in 1977 (without embellishment to the name and where starting at chapter 4 was more of a stylistic thing to make the film look like a classic adventure film of the 1930s), I don't think that anyone in America ever really put the pun together.
The Ford Falcon in the United States had ended in 1970 and the so-called 1970½ Falcon wasn't related to the car which was introduced in 1960 as the 'compact'. The 1970½ Falcon was a poverty-spec 7th Gen Ford Fairlane; which had also parted ways with the Australian Fairlane.

In Australia though, the Ford Falcon had kept on going and the original Thriftpower Six had been taken out from 170 cubic inches to 250 cubic inches. It had also like the Mustang which was built on the cheap and out of the Ford parts bin, acquired the Windsor 302 motor and the Cleveland 351. It was in the latter of those configurations that in 1977, Alan Moffat took to a 1-2 victory at Bathurst. So whereas the rest of the world saw Mad Max's Falcon as something cool, I merely saw him as a big wussbag who wasn't up to the job of competing at Bathurst.
By 1977 though, the Falcon had gone through a generational change and the XC was then currently in production. I bet that in 1977, nobody was looking forward 23 years to when the pun would be a physical reality.

I first came across the pun made real in the year 2000, on a trip to Melbourne. Harrison Ford was the name of a Ford Dealership in Melton and they had obviously seen the wit of it.
They had a much more pressing problem though. The AU Falcon which had been styled to fit in with the new worldwide styling cues of Ford's 'Edge' design language, was something of a commercial flop. The hoopy roofline made getting in and out of the rear seats unpleasant if you were tall, and just like the contemporary Taurus, it had an overly ovaly rear window. The market just wouldn't buy it. They opted for Holden's VT and then VX Commodore. 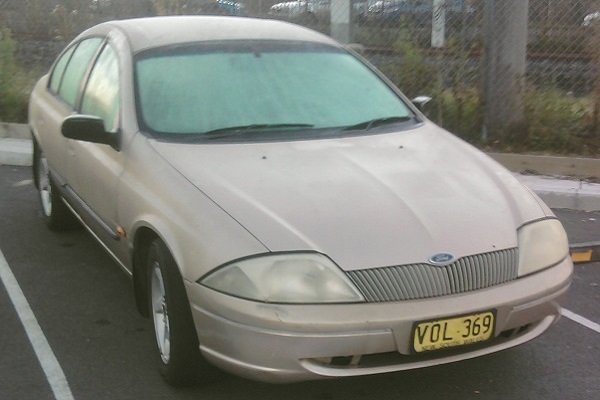 I however kind of like the front of the AU Falcon. I like that the clamshell which sits between the headlights, doesn't extend to meet the top of them. The little bulge that the blue oval sits on, on the centre line, is also a neat little touch which has been copied by other car makers.
Even though I had a Ford Ka Mk 1, which led the Edge styling language, I don't particularly care for the rear lights on the AU Falcon. My Ka had rear lights that fit nicely with its own styling, and those lights probably helped to inform the Fiesta, Focus and Mondeo but they should have never been applied to the Falcon. It says something about what everyone thought, that Ford hastily rectified the nose and tail and all the lights for the AU II and completely abandoned the trend for the BA Falcon. 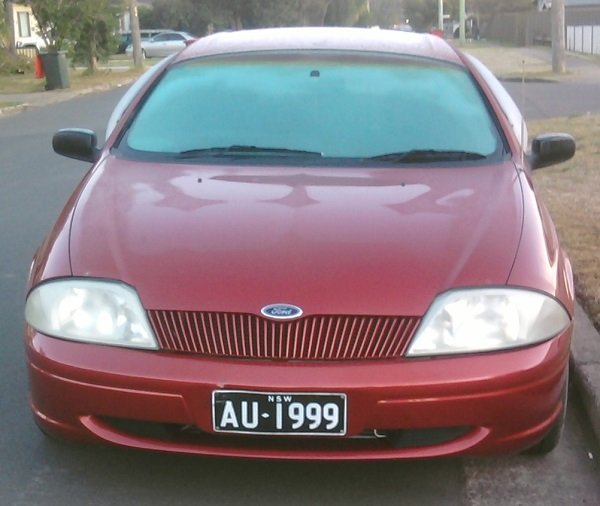 Nevertheless, it makes me happy to see AU Falcons on the road because it is not only a reminder of our automotive past when we actually made stuff in Australia but it has become a kind of revenge for the AU Falcon itself.

During the changeover from XE to XF, Ford made a hoo-haa about putting an alloy head on the venerable six cylinder engine. The problem was that in an Australian summer, it became a semi common sight on long journeys to see Falcons that had died in the heat. There was a rectification made for the EA Falcon, when the capacity was dropped from 4.1L to 3.9L but this didn't help all that much. For EB the engine was re-rectified and the capacity retinkered to 4.0L but from EB to EL, the problem never really went away.
In theory AU had the same engine again but there was a re-re-rectification. Admittedly when the BA came out and then when the engine re-re-re-rectified and renamed Barra, it transformed into a legend but it took a long while to get there.
What this means is that 20 years after the AU Falcon came out, there shouldn't really be all that many on the roads but the fact that there are is stubbornly defiant; I like it a lot.

I very much like the fact that we had a viable car industry at the turn of the millennium and I especially like the fact that we had both a Falcon being made at that date and that there was a Harrison Ford Dealership which existed at the time to sell them.
What I find despairing, in this second decade of the twenty-first century is that we successfully reorganised the economy through deliberate government policy so that there will never be a large scale motor industry again. The legacy of the Abbott/Turnbull Governments, is their gift to future generations of always having to import cars from overseas and denying them the chance to build elaborately transformed manufacters in Australia. On 12th Dec 2013 when Treasurer Joe Hockey dared the car companies to leave, they duly noted that, and promptly did. This was a giant two fingered salute to the people of Australia. 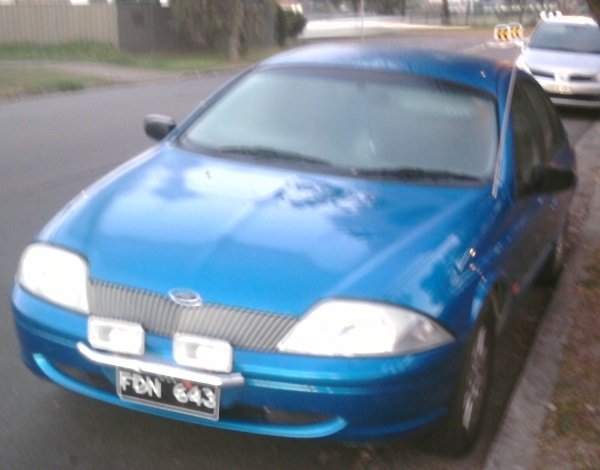 The sight of AU Falcons on the road some 17 years after they went out of production, is itself a salute to the women and men at Ford Australia and the Broadmeadows and Geelong plants who put them together. I love the Millenium Falcon and I would have found it fun to have one from Harrison Ford (they sell Hyundais now).
Posted by Rollo at 12:13