It must be said that I have been scientifically bred over many many generations, to live at the bottom of a peat bog in England, and to die of cholera at age 17. The fact that I have now made it through 4 decades of being alive, is an anomaly and I am sure that the Federal Government of Australia is doing its level best to dismantle the welfare state by the time I get to be old, so that I will die of cholera at age 77; just as nature intended.

I have one of those slight builds which immediately makes everyone think that I have some sort of disease; which is unfortunate to say the least and it was deeply unpleasant to be on the other end of people's unfounded scorn as kid. As such I have rather skinny ankles and probably an undiagnosed case of Raynaud syndrome; so the best way to manage it is to stay indoors in the warm with a nice cup of tea.
I frequently experience a kind of burning sensation in my fingertips, or alternatively a sort of sensation which feels like my feet are wet, even though they are perfectly dry. As such, I like wearing doubled socks in the winter and I probably should consider wearing decent gloves for going out in the cold mornings when the world is still covered in ice.

I recently bought some new football socks (for playing football in) and immediately I was reminded by the cultural phenomenon that is "Where's Wally?" 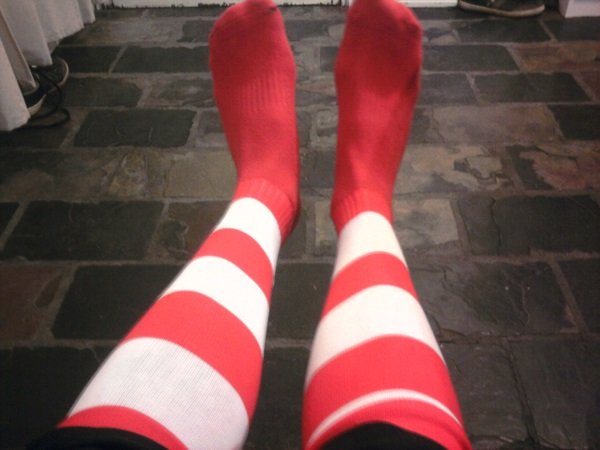 "Where's Wally?" is a British series of children's puzzle books for want of a better word, in which we're given insanely complex and detailed double-page spread pictures of hundreds of people in which the reader is asked to find the eponymous Wally, sometimes his friend Wenda, his dog Woof, a Wizard called Whitebeard, and presumably his nemesis called Odlaw. The pages often contain hundreds of red (and white) herrings which are designed to throw the reader off the scent (presumably with the smell of herring).

Living in Australia though, Wally is a name for someone who is a bit of a doofus. A Wally is a kinder name than say Nigel No-Friends, Billy No-Mates, Blind Freddy who apparently can see everything, and Bob who is your uncle.
I don't really want to rag on Wally though. He seems like a nice chap.

Wally wears a red and white striped long sleeve shirt, a red and white pom-pom beanie, blue jeans, brown shoes and sometimes carries either a walking stick and or a satchel. That seems to me to be the uniform of someone going to a football match. I am red/green colourblind, so equally as far as I'm concerned, Wally could just be a particularly enthusiastic Celtic fan. He's probably not though as he looks far too happy.

Given that Where's Wally's author and illustrator is Martin Handford who is English, there is a reasonable likelihood that Wally is a Doncaster Rovers FC fan. If you saw a bunch of people walking down the street in beanies and red and white hooped football kits, then you'd probably think that it was a Saturday afternoon and that the Rovers had a home fixture at Keepmoat Stadium, Doncaster, South Yorkshire. Finding Wally in a seat of Rovers' fans at Keepmoat Stadium would be an insanely difficult task.

That explains why Wenda is also dressed in red and white hoops and why Wally's dog Woof is as well. They're always reasonably happy looking; probably because they're all going off to the football together. As for the Wizard Whitebeard, he's probably some rusted on eccentric fan who remembers imagined glory days, despite the fact that Doncaster Rovers have never got any higher than the second tier of English football after they'd won the 2012–13 League One title but were swiftly relegated from the Football League Championship a season later. They did however win the Football League Trophy in 2007 so I suppose that's something.

There is a special kind of sanguine about Wally. He is always looking happy and that's probably because over the course of the seven books in the canon, he is virtually always on holiday. We as the reader are asked to find him in a sea of humanity and he is always happy to be found but I can't help but wonder if there is a disturbing secret hidden in plain sight.

Nobody can be that happy all the time. This leaves us with four logical choices:
- Wally is actually a secret psychopath and has done something that we don't know about.
- Wally is a moron and is ignorant of the troubles of the world and his own life.
- Or the most likely, that Wally is wearing a mask for the world and that this is a performative act. Wally is always walking somewhere and might be hiding a tragic past.

Assuming that Wally is neither a psychopath or a moron, then Wally's constant moving and searching might indicate that he is looking for something which he might never find. Perhaps Wally is looking for enlightenment or perhaps a deeper meaning to life that we the reader can not see in a series of pictures.

Wally is Instagram before there was Instagram. Wally is Facebook before there was Facebook. The seven books are replete with pictures of Wally having fun all the time and nothing of Wally the office worker, who is looking at walls that do not change and who living in England, would be leaving the house and coming home in the dark. We never see Wally having to do paperwork, being on the phone to contractors and clients who want things and themselves are under pressure to fulfil their own obligations.
Wally as presented by the books in which we are asked to find him is a hollow lie.

Or it could be that I have this entirely wrong. Maybe Wally is actually quite fulfilled and just has a curious spirit. Wally has a terrible job in a slaughterhouse, or a foundry, or as a maintenance worker at a sewerage farm, or is an office worker at a morally problematic company, and this is how he cuts loose.
Maybe we're supposed to view the best bits of Wally's life and be inspired to go out and explore the world for ourselves. The fourth choice is that Wally endures the rubbish and tedious parts of his life, and appreciates the parts of his life which bring him joy. Remember, none of these are selfies. None of these pictures are by him. They are pictures of him having fun. They are pictures of Wally finding his joy.

Which is why I bring all of this around to my picture of these socks.
I like these socks. I like the sense of fun that they represent. I like playing football and I like watching football. I like that they remind me of Wally, who is happy to explore a big complicated world. This is a picture of me finding joy.
There is no shame in finding joy in small things. I hope that you find your own Wally Socks.
Posted by Rollo at 08:30

Sunny Gudling said...
This comment has been removed by a blog administrator.
2:57 PM