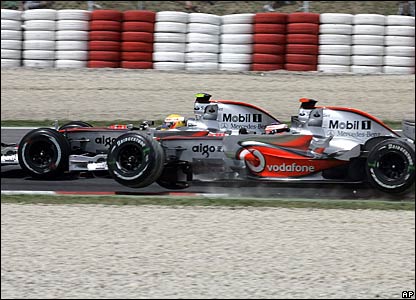 The Spanish GP has thrown up some interesting variables. Kimi Raikkonen the gun Ferrari driver who was expected to sweep all before him retired with electrical failure, Felipe Massa his number 2 has been putting in consistent results and now has racked up a win, Fernando Alonso the reigning World Champion is being upstaged by 22 year old Lewis Hamilton who in only his first season is actually leading the World Championship.
The guard has changed yet again... and F1 is accused of being boring?

Alonso's hopes of winning his home race were over almost before it began when he made an ambitous attempt to overtake Massa around the outside of the first corner.

Alonso lost only two places as he rejoined the track, slotting into fourth place behind Hamilton and Ferrari's Kimi Raikkonen, who was passed by the Englishman on the run down to the third corner.

But the world champion's car had been damaged, although it is unclear how much that affected his pace.

Alonso moved up to third when Raikkonen retired with a rare Ferrari failure on lap 10, but he could not close on Hamilton, who was equally helpless in the face of the charging Massa.

The Brazilian edged steadily ahead in the lead and was nearly 10 seconds clear by the time he made his first pit stop on lap 19, the same time as Alonso. Hamilton stayed out for another three laps but was no closer to the Ferrari when he rejoined the track after his own stop. The first stops were the end of Alonso's already slim hopes of winning his home race for the second year in a row.

McLaren fitted the harder of the two tyre options to his car for his middle stint, while everyone else stayed on the softer tyres and saved the harder ones until the final push.

The plan was presumably for Alonso to limit the damage in the middle of the race and make a charge in the closing laps but he slipped back to more than 10 seconds behind Hamilton in the first few laps after the stops as the tyres took their time to come up to speed.

Alonso continued to lose ground to his team-mate throughout the second stint and was more than 16 seconds adrift by the time Hamilton made his second stop on lap 47. Alonso followed him in a lap later and began to close on Hamilton after they rejoined, but in the final 10 laps the gap stabilised.

The eight points for second place put Hamilton two points clear of Alonso at the head of the drivers' championship, with Massa a further point behind.
Posted by Rollo at 16:43