Basketball was never going to be my sport. This was cemented forever when in Year 7, our sports teacher decided that we were going to play the game and in setting up a practice drill, told us that we had to make a free throw or some such. I was a weedy, weakly 12 year old and the shortest kid in the class, and so there was no way that I could have hoped to make the shot. At this point and in front of the class, I was forced to take shot after shot until I made one and even beyond the point of humiliation; with tears streaming down my face, I still couldn't do it.
In my mind, as a sport, basketball was consigned to the bin and even though this was 1991 and we were in the grip of Michael Jordan fever, all the flashy marketing and hype would never change my opinion. My bedroom wall had a poster of "King Kenny" Dalglish staring back over his shoulder; clad in the Liverpool 7 kit. Putting a ball in the back of the net from 35 yards away, is still more impressive to my mind today than putting a ball through a hoop. Even to this day, I have no idea what a Point Guard is, though I am assured that it probably has nothing to do with a guy standing at the entrance to a building with a Steyr AUG assault rifle.
This didn't change the fact though, that in my wardrobe, a pair of basketball shoes held higher pride of place than my football boots. To this day, they still do; even though I'm ambivalent towards basketball.
There are two names, in the world of basketball, which in my mind stand out more than any others and both of them have shoes named after them. Michael Jordan had the Air Jordan shoes by Nike named after him but I don't think that they are as much a of a classic as the Chuck Taylor All-Star. 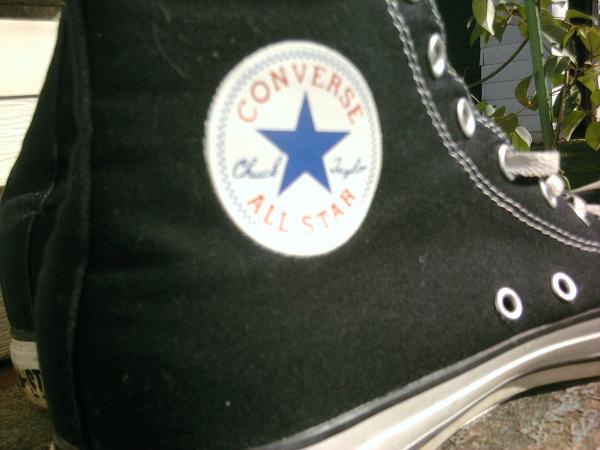 Marquis Mills Converse (which is surely one of the greatest names for a businessman ever) started his shoe making firm in 1908. In 1917 he created his first batch of canvas high top basketball shoes and in 1921, the story of Chuck Taylor and these shoes began to entwine.

Charles Hollis "Chuck" Taylor who was an ex-basketball player in high school, became a semi-professional player for the Firestone Non-Skids, which was owned by the tyre company. As this didn't pay enough, he cold called at the Converse Shoes sales offices in Chicago search of a job whereupon he was hired to sell shoes.
Chuck Taylor was a salesman. Chuck Taylor was a shoe salesman. Moreover, having played basketball in high school, Chuck Taylor was a basketball shoe salesman because he understood the game.
Within a year of being hired, Chuck Taylor had already suggested the addition of a rubber patch at the ankle to protect the talus bone. In 1923, the rubber patch with the star was added.

Converse had hired Chuck Taylor  to go on the road, from school to school to promote the game of basketball and at the same time, hawk the shoes which Converse made. Of course, in order to play basketball, one needs a team to play with and so Converse also hired their own team.
During the 1920's and 30's, Chuck Taylor's All-Stars appeared in a whole host of newspapers and he was so inexorably linked with the shoes that he sold, that in 1932 the shoes officially became the Chuck Taylor All-Stars.

Despite having sold more than 600 million pairs of shoes that bore his name, Chuck Taylor never received a commission on them but often lived out of hotels and motels and driving a white Cadillac across America.
He was probably responsible more than anyone else for the inclusion of basketball at the at the 1936 Summer Olympics in Berlin, even though outdoor lawn tennis courts were often used as venues. By the 1948 London Olympics, proper indoor courts were used at the request of the  International Basketball Federation. By this stage though, Chuck Taylor had semi-retired and became the athletic director at Louisiana State University.

It was estimated that during the mid-1960's, Converse held more than 80% of the athletic shoe market but that was eroded to the point where the company dribbled down to bankruptcy by 2001. In 2003 Nike bought out Converse for more than $300m which I suppose is fitting as they own the trademarks of the two greatest names in basketball shoes: Air Jordan and Chuck Taylor All-Stars.
Posted by Rollo at 12:20