Sydney is a city obssessed with property. Currently, the city is going through the same sort of property price inflation as London experienced in the 1890s. Unlike London though, Sydney doesn't have anywhere near the depth of heritage buildings, nor the same quality of historically important buildings.
This is a tale of my own ignorance about the city in which I live.

Every evening as I make my way home across the Sydney Harbour Bridge, the bus travels over what used to be the egress for trams coming off the bridge. Trams would have plunged into a tunnel and thence to Platform 1 at Wynyard but buses continue overground and onto York St.
Off in The Rocks and to the left hand side of the bus is this sign which is on the side of 121-127 Harrington Street: 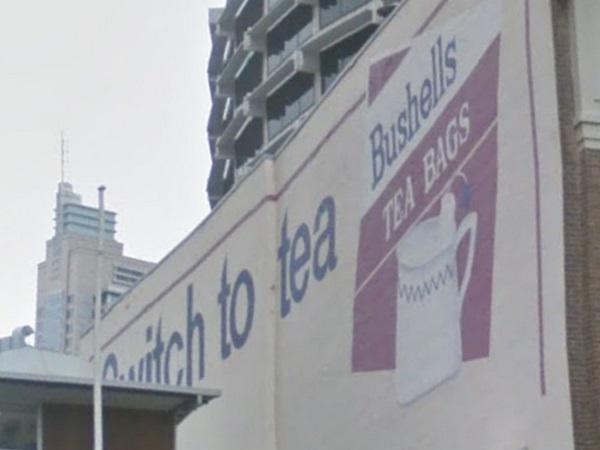 Now I swore blue and blind that I thought that this building was just a bare red brick facade but this signage looks like it was from the 1960s or 1970s. Was I going mad?

As I wandered about The Rocks this morning looking to deliver a packet of papers (and being frozen to the point where even Siberians probably think its a bit cold) I discovered a plaque which informed me that this is called the Bushell's Building. Inside are some pieces of industrial machinery, such as tea blenders and slides, which were left behind from when this building was still Bushell's headquaters and manufacturing plant. Bushell's has long since moved out and been bought out by Unilever but the sign on the outside of the building, was reimagined in 1999 - so I'm not going mad then. It was just a bare red brick facade.
Before the Bushell's Building was a tea factory, it used to be owned by the Sunday Times Newspaper Company (which itself bit the dust in 1930). It makes sense that Bushell should set up his tea factory in The Rocks. It's in the heart of Sydney itself which makes immediate distribution relatively easy and being so close to the docks, also allows for import and export of teas and coffees.

Even just seeing a sign like this makes me think that perhaps the things that we see as familiar should be preserved. Immediately I think of the Arnott's sign on the railway bridge at Strathfield which thankfully has been preserved and I find it crazy for instance that the Coca-Cola billboard at Kings Cross which has been there since 1974 isn't heritage listed yet.

If a city like London can retain elements of the built environment from long ago, then surely a city like Sydney if it wants to call itself a world class city should attempt to do likewise. Great cities like Paris and Athens have done so and even madmen like the Facist leader Benito Mussolini wanted to establish a brand new Rome so that the ancient city of antiquity could be preseved. Cities like New York suffer from the fact that the Tower Building at 52 Broadway, New York, which was the world's fist proper skyscraper and the Cumberland Hotel which carried the first electric billboard, are demolished and disposed of to make room for the next thing there.

Even though Bushells moved out and no longer has anything to do with the building (and so in effect gets free advertising) and even though it is a piece of advertising, I rather like the fact that this has been restored. This sort of thing reminds us that even an great complex thing like a city has a story which continues to live and breathe with the people who live in it. It also reminds me that I'm not going mad.
Posted by Rollo at 12:33