Now that we've all calmed down a bit, following the unexpected result that Donald Trump will be sitting in the big chair at 1600 Pennsylvania Avenue from January next year; and we whiz past the fact that the Republicans will control both the House of Representatives and the Senate in the 115th United States Congress, there was one result which may have passed by more people's attention and that was the D.C. Statehood Referendum.
Way down the ballot, the people of the District of Columbia voted overwhelmingly in favour for statehood.

https://www.washingtonpost.com/local/dc-politics/district-voters-overwhelmingly-approve-referendum-to-make-dc-the-51st-state/2016/11/08/ff2ca5fe-a213-11e6-8d63-3e0a660f1f04_story.html
District voters overwhelmingly approved a referendum to make the nation’s capital its 51st state on Tuesday, with pollgoers saying they hope the vote puts pressure on the next Congress and president to address D.C.’s lack of representation in Congress.
...
Republican presidential nominee Donald Trump did not take a firm position on D.C. statehood during the campaign. But in an interview with The Washington Post’s editorial board in the spring, he said statehood is a “tough thing.”
- The Washington Post, 8th Nov 2016

A "tough thing" is an understatement.

This was the second referendum on statehood to be held in the district and the second time that the voters have called for the district to be admitted as the 51st State in the Union.

There are quite a number of problems which immediately arise. In Article IV, Section 3, Clause 1 of the US Constitution, even if the territory in question applies for statehood, it still says that "no new States shall be formed or erected", "without the Consent of the Legislatures of the States concerned as well as of the Congress".

The last time that the House of Representatives voted on D.C. statehood was back in November 1993 in the 103rd Congress and even though the Democrats controlled chambers of Congress, as D.C. was then a predominantly Republican voting jurisdiction, it was roundly chucked out by 277 against to 153 for. In the next Congress, when Republicans will control both chambers of Congress, it might be chucked out again because D.C. is now a predominantly Democrat voting jurisdiction.

Even if we assume that the Republicans would be nice to D.C, there's still another bonkers crazy hurdle which has to be sorted out.

The US Constitution in Article I, Section 8, Clause 17, provides there shall be a "District (not exceeding ten Miles square)" which would become the "Seat of the Government of the United States". This outlines the principle that that Federal District not be part of a state but it doesn't say how big that that state has to be.

In theory, the Federal District could be as small as a peppercorn though I would suspect that it would need to contain the buildings which house the Executive, Legislative and Judicial branches as outlined in the Constitution. If that's the case, then it's possible to draw a very small L-shaped district which mostly contains parks and apart from homeless people who might be living in them, the only family who would officially live in the whole district, would be that one particular family who calls 1600 Pennsylvania Avenue home.
If New Columbia were a state, it would be bigger in terms of population than both Wyoming and Vermont but it would far smaller than even Rhode Island which is 17 times as large. The new federal district would be less than 2 square miles. 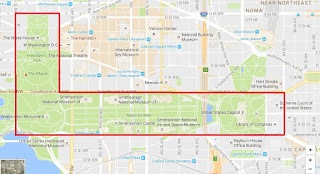 There is an even bigger hurdle which would have to be overcome and that is a sneaky little thing called the Twenty-Third Amendment which if left unchecked, has unintended consequences.

The District constituting the seat of Government of the United States shall appoint in such manner as the Congress may direct:
- A number of electors of President and Vice President equal to the whole number of Senators and Representatives in Congress to which the District would be entitled if it were a State, but in no event more than the least populous State
- Amendment XXIII, Section 1, United States Constitution (passed 1961).

As it stands, the District of Columbia gets three electoral votes based on its population if it were a state. If it were a state it would be entitled to one Representative (which it kind of already has) and two Senators (which it does not). If D.C. becomes the 51st state of "New Columbia" and the Federal District shrinks to become just the area which includes the Capitol Building, the Supreme Court and the White House, then New Columbia by virtue of being the 51st state would absolutely be entitled to one Representative and two Senators; so nothing changes there but does that mean that that new smaller Federal District would also get three Electoral College votes, despite only having one family living within its borders? Maybe? If so, who votes for them? Does that mean that the President and First Lady get three members of Congress all to themselves?

The most logical assumption to this whole thing though is that this is oh so much yelling into the wind. The experience of Puerto Rico is that the Congress has been amazingly slow on this issue. It took California just two years following the discovery of gold for it to be admitted to the Union but despite presidents Roosevelt, Ford, Reagan, Bush (41) and Obama supporting Puerto Rico's push for statehood and despite the 2012 statehood vote returning "yes", it still has got nowhere. D.C. statehood could also end up in legislative purgatory for years and years.