One of the many fine podcasts that I listen to, of which there are many, is "We Got This" which is hosted by Hal Lublin and Mark Gagliardi. As the title suggests, they are given quandaries and questions to sort out the answers to and those questions range from the ridiculous to the sublime.
On Episode 90, they answered the question of "which is the best door?" (see the link at the bottom*) and I won't spoil the episode other than to say that the answer that they arrived at while fun, was a generic answer and not specifically "which is the best door in the world?". I shall provide what I think is the answer to this question.

It's one of those strange things that there are some iconic buildings which although are instantly recognisable, their doors are not. Any list of the most famous buildings in the world must surely include The White House, The Empire State Building, The Chrysler Building, The Sydney Opera House as well as the Palace Of Westminster's Houses Of Parliament Clock Tower which is more commonly known as Big Ben after the bell that it houses, but these buildings are famous in their own right and nobody can describe what their doors look like unless they are really familiar with the buildings in question.
The White House itself is an interesting case in point. People are familiar with the Oval Office, the Red Room, the Blue Room, the Situation Room and the West Wing but not many people can describe the front door to the building. Likewise, I can describe in immense detail what the Australian House Of Representatives and the Senate look like on the inside but I have no idea what the front door looks like.
Conversely, I can describe what the doors on an A-Class Suburban Train looks like in Sydney, or what the doors on my eight and nine car tube trains look like on the London Underground but the Underground is more famous for its roundels which have outlasted all other attempts to brand the network to such an extent that the roundels and Harry Beck's famous map practically are the London Underground in many people's mind's eye.

To people of an older age, perhaps "The Green Door" from the song of the same name is what has lived long in the memory. There is an old piano and they play it 'hot' behind the green door but apart from that we don't know very much about what's behind it.
Perhaps the second most famous door is the blue door on the front of a spaceship with a broken chameleon circuit and bears the label 'Police Box - Public Call' above it. Again, I'd argue that although it is famous in the British Commonwealth and some parts of the United States, that particular door is more closely related to the object itself which is mostly composed of four sides which roughly look the same.

No, in my not very well paid opinion, the best door in the world is so iconic that it is more famous than the actual building to which it is a part and the address also adds to the mystique. I think that the door is so brilliant that if I wasn't renting, I'd pull the existing front door off of its hinges and replace it with a replica of this famous door.
That door is the front door of none other than Number 10 Downing Street. 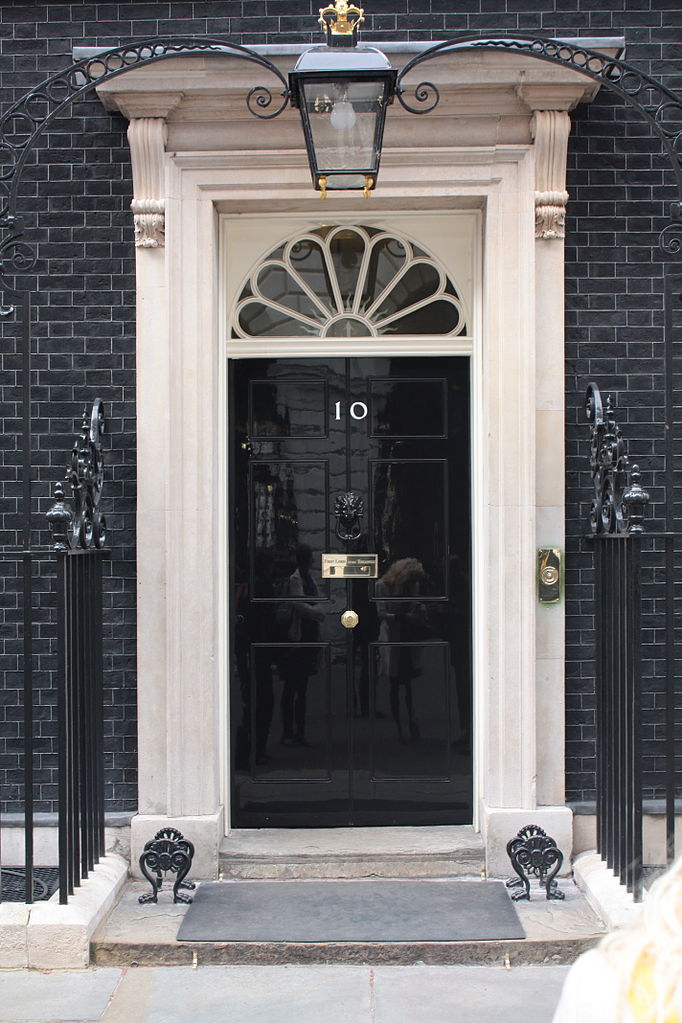 The front door of Number 10 is itself an icon. Whenever anyone visits the British Prime Minister, the photo opportunity is not of them meeting in the cabinet rooms or one of the reception rooms but of them arriving at the famous black door. I'd go so far to suggest that you could knock down the whole building and provided you kept the black door, with the fan of glass and the white number 10 affixed to the front, nobody would mind. The metal work  which frames the door is also iconic as well.

The front door of Number 10 is a case of metonymy gone mad. A metonym is when a part comes to stand for the whole and in the case of the British Government, Number 10 has come to represent the Office Of The Prime Minister and the black door on the front of that building is the visual representation of that.

It is visually solid, stern, very formal looking and because it has existed before the advent of the internet, television, radio, telephone,  telegraph and even daily print media, it also projects an air of permanence like nothing else can. The White House only goes back to 1800 but Number 10 was around at least a hundred years before that. It was behind this door where the administrative affairs of empire are imagined to have taken place and behind the same front door where Disraeli, Gladstone, Churchill and Thatcher conducted business. It is behind that same door where I in my most frivolous flights of fancy would want to live, even though I would be rubbish at the job.

I can think of no other door in the world like that. The doors on one of my former place of employment at 48 Martin Place, the money box bank, were far more grand and far more elaborately adorned with brass handles but again, people remember the building and not the door. The door to the great vault downstairs weighs 111 tons and took a whole team of horses just to pull it down the street but it remains hidden away and you have to go looking for it. The door to the great vault of that building is physically for more impressive but what lies behind it is only a physical store of wealth; not the embodiment of power.

People of the world, the front door of Number 10 is of itself so iconic and representative of so much, that it's difficult to think or any door in the world which is more famous.
If a door itself is symbolically endowed with ritual purposes, and the receiving of people from outside, then the door at Number 10 must surely be the best example of this because it is the most doory of doors and as such, it is the best door.

This is a good read. Who do you write for?

I do not write for anyone other than myself. Am always open to paid work.