Horse 2192 - Going Back To The Electoral College

To call this election cycle in the United States "different" is to make the understatement of the century (and I don't think that that will be an understatement). When you have two candidates, both of whom were the least popular in US electoral history, thrown up by tow political parties who are probably both in a state of meltdown after six years of deadlock, then normality isn't an option.

To compound the strangeness of this cycle, Donald Trump became the President-Elect, having gained less of the popular vote but more of the votes in the Electoral College. There have now been five elections where the winner of the Electoral College lost the popular vote, six if you include the ambiguity of the election in Alabama in 1960 and possibly seven if you include the 1864 election during the Civil War.

Naturally as you'd expect, such a result brings down a firestorm of controversy if you try and posit why or how they Electoral College exists. This tweet and graphic being such an example.

Here is exactly how the U.S. electoral college system misrepresents voters in one easy to read graphic.
- via Twitter, 20th Nov 2016. 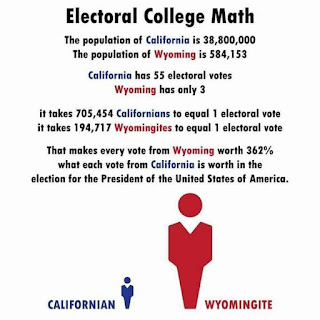 The first question to ask is why the Electoral College exists. It is an archaic system and stems from the day when it took days and weeks to cross the country and so the system was invented so that the states would send delegates on behalf of their citizens, to vote for them.

https://www.congress.gov/resources/display/content/The+Federalist+Papers#TheFederalistPapers-68
The choice of SEVERAL, to form an intermediate body of electors, will be much less apt to convulse the community with any extraordinary or violent movements, than the choice of ONE who was himself to be the final object of the public wishes. And as the electors, chosen in each State, are to assemble and vote in the State in which they are chosen, this detached and divided situation will expose them much less to heats and ferments, which might be communicated from them to the people, than if they were all to be convened at one time, in one place.
- Alexander Hamilton, Federalist No. 68, 14th Mar 1788.

Hamilton had a problem. It was probably already immediately apparent that no only did the people of different states have "heats and ferments" but that they were also given to factionalism. The Electoral College, whilst being incredibly racist in its overtones by wanting to only include slaves as 3/5ths of a person as it finally washed out in the constitution, was designed as a safeguard against the people. If that sounds anti-democratic to you, then you're right, it was designed to be.

https://www.law.cornell.edu/constitution/articleii#section1
Each State shall appoint, in such Manner as the Legislature thereof may direct, a Number of Electors, equal to the whole Number of Senators and Representatives to which the State may be entitled in the Congress: but no Senator or Representative, or Person holding an Office of Trust or Profit under the United States, shall be appointed an Elector.
- Article II, Section 1, Clause 2, United States Constitution, 21st Jun 1788.

You will note that the US Constitution mentions nothing about holding a general election for the President or even if there needs to be one. It is entirely feasible that Hamilton conceived in his mind, an unelected President, who would be appointed by the states.

This actually renders most of the graphic irrelevant. Electoral College votes and indeed the number of Representatives and Senators that the states get, are determined by the apportionment as a result of the census as stipulated elsewhere in the constitution. The actual legal value of any person's vote in a Presidential Election as determined by Article II, Section 1, Clause 2 of the United States Constitution, is the same for all people across the Union - it is NIL.

If that were to be followed, every election would be determined by the people of California, Texas, Florida, New York, Pennsylvania, Illinois, Ohio, North Carolina and Georgia. The remaining 41 states in the Union would never have a say ever again; that's perfectly fine it that's how you want the system to work. It does mean though, that people in the cities, forever dictate to people in rural areas how the country should be governed.

A pure popular vote, means that California by itself completely cancels the smallest 16 states in the Union; even if all 16 cast 100% of their votes in the same direction. If you happen to live in any of those states then too bad; democracy hates you.

The implication is that people like like, who protest something like the Dakota pipeline should by rights be ignored. For every one person stupid enough to live in North Dakota, there are 51 people living in California. Let's put this another way, 14 times more people live in New York City that in North Dakota.
Just by itself, New York City gets 17 members of the House Of Representatives while the entire of Wyoming gets on at large. With those 17 members of the House Of Representatives comes 17 Electoral College votes. Is it right and just that people living in one big city, should override the wishes of people 1500 miles away and forever? That is the unfortunate implication.

There are loads of things wrong with the US voting system, it has managed to combine the worst aspects of non-compulsory voting, gerrymandering, winner takes all voting, first-past-the-post voting, holding elections on a Tuesday, Voter ID laws and subsequent disenfranchisement, and combined them all into one glorious steaming pile of hot mess but I don't think that means that the idea of applying different weights to people's votes is of itself a bad idea.

Yes, I will admit that the election of a man who says awful things, looks like he's been marinating in Fanta and is going to produce an absolute train wreck of a Presidency is a bad thing but that's not necessailry the fault of this aspect of the Electoral College; rather it is the fault of so very many other things. If the result of the election had gone the other way, we still would have seen the community convulsing with extraordinary and violent movements; that is not the fault of the Electoral College either.
What makes this whole thing really strange is that the people who would usually rail against the tyranny of the majority in some aspects of legislation are now calling for it in others. It simply does my head in.

To tell you the truth, I would prefer to eliminate the primaries and to have a single preferential election but I like the idea that the Electoral College tries to give extra weight to the little states who otherwise would never have any say in the democracy at all. If I was Grand Poobah and Lord High Everything Else, I'd run the top seven candidates against each other and then work out a grand Electoral College preferential ticket. Those 538 Electors would then submit preferences and we'd count off the Electoral College using instant run-off voting. Of course, I think that Presidential democracies are idiotic in principle but again, that is not the fault of the Electoral College either.
Posted by Rollo at 07:17