Horse 2310: Pauline Hanson - An Object Lesson In The Law

Yesterday in parliament, isolationist, nativist, racist, and islamaphobe, Queensland Senator Pauline Hanson, sat in the floor of the chamber of the Senate, while wearing a burqa. For what reason she did this, I don't know because neither her website, nor anything she said, gives the reason. At best guess, I can only assume that it was to prove something about security but even then, she passed through security clearances on her way to enter the building; so if anything, all it proves is that the security protocols an practices employed by Parliament House are working properly. 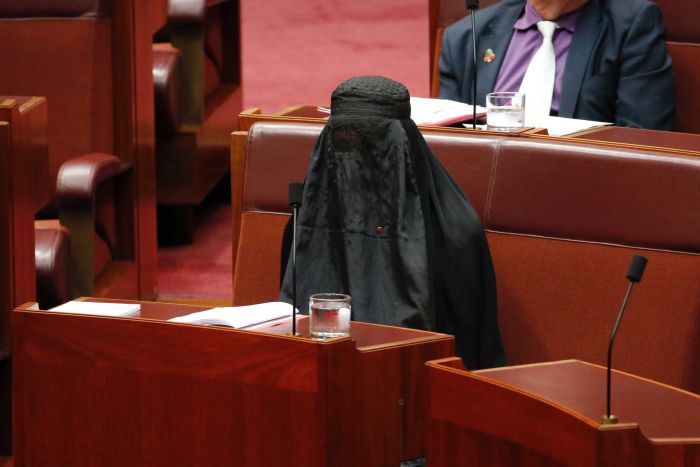 This was set against a background of a number of parliamentarians questioning and being questioned about their eligibility to sit in parliament, subject to citizenship requirements of Section 44 of the Constitution. Looking at the broader global context, this also comes amidst a week which saw neo-facists, Neo-Nazis, and other Ku Klux Klan like elements protesting in Charlottesville Virginia, over the removal of statues of Confederate General Robert E Lee, and the use of a motor car as a weapon in a terrorist attack against a counter protest, killing at least one person and injuring others.
With those things in mind, it makes​ the motives for why Senator Hanson would choose to wear a burqa in parliament, harder to ascertain. It does however provide a specific object lesson on two points of law. One which defends Senator Hanson's actions, which incidentally might have also made them self defeating, and the other which very much proves that if she intends to take any action because of the religion that she dislikes, that it is doomed to failure.

Under the doctrine of reception, there are specific rules which determine which laws passed in the United Kingdom and England, previous to new laws in Australia either replacing or repealing them, will apply in Australia. One of these is the Bill Of Rights Act 1689, which was passed under the reign of William and Mary, immediately after the Glorious Revolution. The Bill Of Rights Act 1689 does a number of things, but the part which is important and relevant here, is Section 9.

http://www.austlii.edu.au/au/legis/act/consol_act/bor16881wams2c2306/
That the freedom of speech and debates or proceedings in Parliament ought not to be impeached or questioned in any court or place out of Parliament.
- Section 9, Bill Of Rights Act 1689

If Senator Hanson wanted to prove some point by being ejected from the Senate Chamber because she was wearing a burqa, then she will have failed on that notion because of Section 9. The right to free speech and by extension the right to free expression, allows for Senator Hanson to make statements and dress how she wants. In the past, and especially immediately after lunch, there have been times in both chambers where members of both the House and Senate have worn gym clothes in the chamber, because they'd been for a run at lunchtime. The rules of parliament don't care what someone is wearing at all.
Given that Senator Hanson is perfectly allowed to wear a burqa in the Senate chamber in absolutely impunity, the responses to Ms Hanson were not framed with reference to the law. There were two speeches given to Senator Hanson; one by Tasmanian Senator Jackie Lambie and the other by the Attorney General George Brandis. Both of these speeches spoke to the decency and the deeper moral question of what Senator Hanson had done, rather than the legality of it.

The other object lesson which was ironically delivered by Senator Hanson, was to do with the Consideration itself. Presumably in her extreme dislike of Islam, Ms Hanson would want to bring about a change of law to do something about it. Section 116 of the Constitution prevents this though.

http://www.austlii.edu.au/au/legis/cth/consol_act/coaca430/s116.html
Commonwealth not to legislate in respect of religion

So there you have it. Two pieces of law in operation which both explain why Senator Hanson was allowed to do what she did but not allowed to do what presumably she wants to do. I think that both Ms Lambie's and Mr Brandis' response to Senator Hanson's​ act of tomfoolery and knavery were both perfect in execution. The right to free speech also comes with the ability for everyone else to judge that same free speech; in this case it was free but foolish.
Posted by Rollo at 10:24