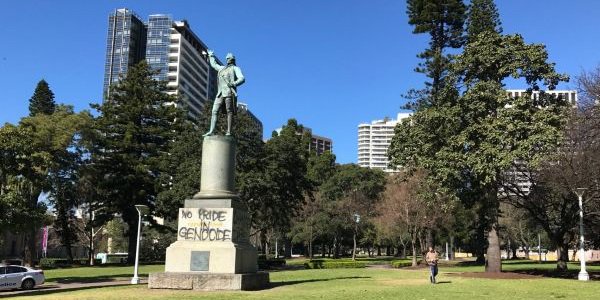 Can I just start out by saying that a memorial is not of itself, history. Memorials, which include statues and monuments, are erected after the fact; in an effort to either remember an event or to tell a story about it. Memorials and monuments are political statements and to suggest anything otherwise, is to tell a lie.
Secondly, this isn't anything even remotely like the erasure of history which occurred in the Soviet Union and under the leadership of Joseph Stalin. Stalin wanted to remove the all traces of the past, whereas this graffiti on a public monument is calling for people to remember a past which has already been suppressed. If there is anyone who Malcolm Turnbull should be accusing of erasing the past, then it's the entire of Australian society up until about 1992.

The monument in question of Captain James Cook, states that it was erected to commemorate Cook's discovery of the east coast of Australia in 1770 is no different. At the base of the statue, there is an inscription which reads:
This statue was erected by public subscription assisted by a grant from the New South Wales Government, 1879.
Remember, memorials and monuments are political statements which are erected against the backdrop of a particulat political climate and this is no exception. In 1879, the Colony of New South Wales as it was, had only properly achieved self goverment 13 years earlier.

I think it interesting that this was erected during the first term of the Premiership of Henry Parkes; who was instrumental in a great deal many things in Australian history; including the push for the six colonies to be federated into one country. Parkes was a very strong opponent of the transportation of convicts to Australia, he campaigned for self-government for the colonies of Australia, he sent petitions to the British Government in London demanding universal suffrage for Australians.

I suspect that the funds for this statue were probably raised in the months and years following the centenary of Cook's voyage in 1870 and it probably took some time to accrue the necessary monies. The New South Wales and Sydney of 1879 when it finally went up, wanted to see itself as having greater importance in the world; so finding any kind of founding narrative was instrumental in the telling of the story of New South Wales to itself. James Cook was seen as an adventurer and a jolly good chap, despite him actually being a grumpy little Yorkshire man. Any notion that there was any history before Cook's arrival would have not even been considered by the New South Wales of 1879.

I don't know what Parkes' view of Aboriginal peoples of Australia was but when asked was was being planned for them in the 1888 centenary celebrations of the founding of New South Wales, Parkes is reported to have said "And remind them that we have robbed them?"
This is the climate in which the statue was erected. This was a colony looking for an identity of its and yet still very much wanting to fit itself into the greater story of the British Empire, which at the time was seeing its limits grow wider still and wider. That time has passed and has been consigned to the dustbin of history. The British Empire isn't really a thing anymore and the former colony of New South Wales is now a state which is part of a very different country.

The interesting thing about books, films, paintings, sculpture, monuments, and indeed any piece of art is that once they are released into the world they no longer belong to the creators but rather the people who buy them, consume them and interpret them. I can be affected by a book, song, play, artwork and it will be entirely different to how you are affected by that same piece of art. That same principle applies to the same person if they are 15, 35, or 75 years old. That same principle applies to a society as it moves along and changes, and reinterprets its past. The statue of Captain James Cook will mean something different to someone living in the New South Wales of 1879 to someone living in the New South Wales of 2017. There is absolutely a right for society to question and evaluate its past; which again is different to the sort of thing that Prime Minister Malcolm Turnbull is suggesting.

One thing I find particularly disgenuous about this whole debate about how we choose to look at the past, how we choose to reinterpret it, and how we choose to memorialise it through statues and public holidays is the way in which the right tries to pass this off by saying that there needs to be more of a focus in addressing the issues faced by Aboriginal people and then having raised a fuss and distracted everyone from the argument, they go back to the default position of not caring about the lot of the issues facing Aboriginal people. Discussion is successfully shut down and the injustices remain. Not only do the outward signs and political statements, which includes statues and monuments, remain but the chance for redress is deliberately destroyed. We continue to remind people that we have robbed them by continuing to remind them that we have robbed them.

Not only that but in the case of Australia, we actually have the audacity to proclaim a public holiday for the date in which we officially stole the country. I can think of no other country in the world which does this. Australia already has a public holiday on the day that the country started but that coincides with New Year's Day. We could make July 31st a public holiday, which is the day that Western Australia was the last colony to vote to join the federation and celebrate the fact that Australia was started with a vote and not a war but that apparently is too much effort.

If I was Grand Poohbah and Lord High Everything Else then I would implement what I think is the perfect solution to the issue of the statue of Captain James Cook. My solution would be to erect two other statues, which are close to the statue of Captain James Cook and in the same style and in direct opposition to it. I think that I would pick statues of both Bennelong and Pemulwuy and have them as a physical reminder that the land was already occupied and already had custodians and guardians, long well before Captain Cook showed up.
Just like the statue of Fearless Girl who stares down the Stock Market Bull in New York City, or the statue of Oliver Cromwell who stares down Charles I outside the House of Commons in London, or even the wee little statue of Trim the Cat who watches over Matthew Flinders on Macquarie Street, the message of the present is more powerful if the messages of past are physically challenged.
The way that you challenge ideas is to place other ideas up against them. The way that you should challenge ideas and political statements of the past is by placing new ideas and political statements up against them. I wouldn't balance history by adding additional plaques but by adding additional statues.
Posted by Rollo at 07:17