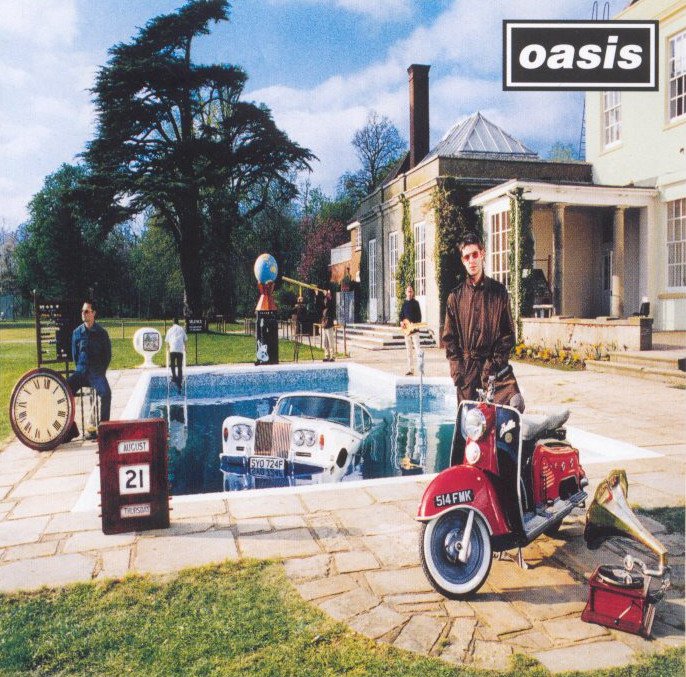 I have heard it said that what ever music was number one on the charts when you were seventeen is the most likely to stick with you. I don't have a good explanation for this except to say that there must be something particular about hormonal teenage brain chemistry that burns deeper than at any time in a person's life. Indeed popular culture gives these years a sort of overly romantic saccharide, which I think is the cultural equivalent of diabetes.
Having said that, the music that did top the charts when I was seventeen was immediately post grunge and during the middle of a Britrock explosion. Blur, Soundgarden, Supergrass and Oasis for a very short period of time and this is what I stepped into. The thing is that as a fan of Oasis, I still thought that Liam Gallagher was a wingnut and as I have gotten older and have heard more songs written by Noel Gallagher where Liam isn't around, especially in the High Flying Birds, the more that I have thought that Noel really never needed Liam.

Be that as it may be, Oasis Sat nicely in my music collection next to Blur and the Beatles and in my car stereo, Oasis was more likely to appear on mixtapes than either of those two. I suppose that while the kids in my grade at school were enamoured with bands like Nirvana, the noise which was coming out of Northern England was far more interesting to me.

On the 21st of August 1997 (it was 20 years ago today), Be Here Now was released and at the time it was the biggest selling album on pre-release in history. What we got upon hearing for the first time was unlike the angry sound of Definitely Maybe or the wall of sound where every level was turned up to eleven with What's The Story? (Morning Glory), and this cocaine riddled, overdriven soundscape of noise and confusion that revelled in its own self importance. If viewed as a prog rock album, then it's fine but by any other filter, it's about half an hour too long. Songs that go beyond seven minutes in length had better pretty spectacular because if they aren't, they fail miserably.
Of the Oasis catalogue, Be Here Now was destined to live at the bottom of most people's lists of favourite albums. If you're on a road trip, the sheer scale of it blends into the miles and it is only then that you really appreciate just how massive the album actually is. Imagine then my surprise when I heard this coming out of the speakers and through the floor, from the hairdressers' shop below our offices at work; which makes a vast difference to the usual cavalcade of Disney tunes from Frozen and now Moana. Objectively, the fact that I am in my late thirties and I know all the words to Libireé Delivreé (Let It Go) in French, is not something that I would have wished for.

Some might say that music has a way of transporting us back to a point from long ago but I must have missed that memo. I'm simply not chained to the places I never wished to stay. For me although every one of these songs is familiar, they are at the same time brand new and I think that's mainly because I don't hear the voice of Liam Gallagher.

In these demos which were apparently recorded in Johnny Depp's studios, Liam is delightfully absent. Instead, the only voices we are those of Noel Gallagher and here, as indeed as always, the elder of the brothers Gallagher just sounds warmer. This is the voice of a musician who is working away at his craft, rather than the Mancunian whine of someone who wants to be a rock star but isn't prepared to work for it.
It's not like any voice track is perfect either. Being a set of demos, the lyrics still aren't sorted and the sounds of guitars still haven't been mixed to any standard that you'd find on a proper studio album but with what little equalizer ability that I have on my tablet, I can still climb around a lot of the technical deficiencies of the recording. In fact the version of the recording that I'm currently listening to on my tablet is unique to me, in that I passed it through a pop and click filter and then a hiss filter. It still isn't approaching studio quality but if the album had been released in 1997 and it was more in the spirit of this, it would have been a thousand times better than the version which was actually sold to the public.
It makes me wonder if Liam had never been part of the band, would there really have been that much of a difference? I think not.

So what do we have here? All songs that were on the album are present except for the All Around The World Reprise, which by its inclusion on the final album was obviously trying to ape the reprise at the end of Seargent Pepper's Lonely Hearts Club. They're all here but in a different order.

Be Here Now
With the exception of What's The Story (Morning Glory), Oasis albums have names which either don't appear as lyrics anywhere on the album or even further to that, don't appear as names of songs either. The lyrics for this song are still in flux but the sound of the cheap woodwind instrument is present here.

I Hope, I Think, I Know
In the first batch of CDs for Australian release, this track had a manufacturing defect and if you took the CD back to the store they'd replace it for another copy. As a result, the first time that I heard this song in its entirety was about a week after the rest of the album. This version sounds mostly the same as the final version but the most immediate thing that I've noticed is that all of the guitar fills and solos are different. Noel Gallagher remarked on BBC Radio 4's Desert Island Discs that he didn't really need to take any discs on the desert island because if he had a guitar, then he would try to play everything from memory. He also admitted that he can't read music and so that means that it stands to reason that every single time he plays a song that it will be different because he's either had to play it from memory or make it up on the spot.

Don't Go Away
The final version of this song was supposed to be one of the sweeter tracks on the album but is tortured by Liam's whine. In this outing, the guitars aren't driven as hard and the voice of an acoustic guitar is more to the front. Now that this is being sung by Noel in a lower register than Liam did, the song is closer what it was supposed to achieve.

Stand By Me
The problem about having these two tracks side by side is that it becomes really apparent really quickly that they they share the same DNA. The punchline in this song as is also the case in the final version is that sequence of chords which counts out the beat in the chorus. Apart from this it sort of lumbers along and either this or the previous track could have been left out entirely and no one would have minded. Noel sounds sweeter in version of the song than Liam could have ever done and yet it is still a hulking slow thing that doesn't achieve what it's supposed to.

D'Ya Know What I Mean?
Conspicuous by its absence is the album's opening of a Spitfire taking off. On the album, this was one of the few songs which benefitted from having everything turned up to eleven. This version strays into synth pop and almost sounds like a 1970s advert for Fanta. I still think that the lines:
"I met my maker; I made him cry.
And on my shoulder he asked me why,
His people won't fly through the storm,
I said 'Hey listen up, man. They don't even know you're born.'"
Are some of the best in the whole Oasis catalogue.
The opening phrases of this song are supposed to remind you of Wonderwall which was published in 1995 and served to help as the opening to final version of the album but it seems strangely unnecessary here. As the fifth track in this set, it sounds like it should be the theme tune to some Danish crime drama which comes on at 11pm.

Stay Young
There is something about this song which no matter how many times I've heard it, gives me one of those AMSR responses. The most obvious thing that is missing is the mellotron. In its place, the drum track which sounds as though someone has affixed a tambourine to the drum stand is a nice touch.

The Girl In The Dirty Shirt
The problem with not having Liam in these demos is that you don't get Noel singing highlights to accompany him. Instead we get Noel double tracked and accompanying himself, which doesn't produce as nice a contrast. Also, the absence of the piano is kind of a let down but that's the sort of thing to expect from a demo.

It's Getting Better (Man)
This song still sounds as big and as brash as it always did. There's a weird thing where Noel ends all of the lines in the verses by moving upwards to flat but if this was played back, then this would have made itself apparent; hence the final album track. Most of the second half of this song always sounds like it's just Noel and whoever was in the room just sort of faffing about; that aspect remains and it's still fun.

My Big Mouth
I don't know how many times I've heard this song over the years and apart from the fact that it sound like someone's opened a fresh can of rock, it's been given a side dish to of word salad. This song benefits from being pared back to the shorter length here. Of all the songs on the album, this is the one which has the biggest boots and kicks the hardest.

All Around The World
The film clip for this song was some sort of Yellow Submarine thing and only helped to underscore the fact that the final version of this album was overdone in its sense of self importance and grandiosity. I once saw a very small portion of this song used in an advert for a mobile phone company which has to be about the ultimate insult. At 5'26" it still too long but it's got nothing of the nine minute behemoth which appeared on the final album.

Magic Pie (not here)
Conspicuous by its absence is Magic Pie. The album track was a mad rush of guitar solos and someone pumping away at a mellotron and fitted perfectly with the rest of the album. For it not to make an appearance here though, fills me with a little bit of sadness; as though one of your toys has gone missing.

Therein lies the heart of the matter for me. This collection of demos without Liam's voice, transports me back to a past which never existed and with a sense of misplaced nostalgia for a thing that never was. This album is like something which has fallen through a crack in the space time continuum from a 1997 which I didn't get to live through. I wonder if in a 2017A, if there's another me who is pondering a similar problem but with a version of the album that does have Liam's voice. Somehow I suspect, that I got the better part of the deal.
Posted by Rollo at 07:17