Once upon a time in the land that they call the past, Toyota was known for producing reliable and yet boring motor cars. From the Camry to the Corolla, the Yaris and the Hilux, a Toyota was a car that you bought if you wanted to go from A to B but didn't care about style. On the scale of exciting to bland where the inverse was reliability, Toyota was on one side and Alfa Romeo was on the other. Toyota drivers never ever wanted to see their mechanic and a Toyota was like having a brown bread sandwich where the filling was another slice of bread; Alfa Romeo drivers were on a first name basis with their mechanic and an Alfa Romeo was like a Vindaloo Hot Pot with Bordeaux, Tiramisu and seven shots of espresso - the end result was nasty but boy, was it ever fun.

Recently though, Toyota have gone halves with Subaru to create the GT86/BRZ, made the Camry look a little bit nicer by putting jam on the sandwich, and have made a compact utility vehicle called the C-HR. I personally don't understand the term CUV because it isn't exactly a utility and is more like a big hatchback. The C-HR looks pretty nifty and I imagine is pretty cool in the eyes of Toyota drivers but somehow it manages to be less cool than the Nissan Cube and a little less practical to boot. 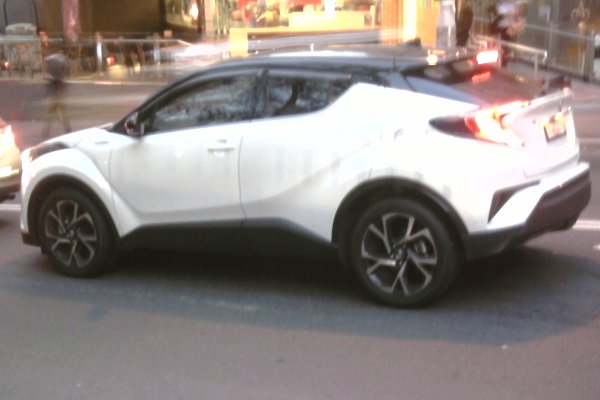 One of the inherent problems with jacking up a station wagon or a hatchback is that because you've raised the height of the vehicle above the ground, that also raises the height of the tailgate. Sure, you might get a slightly deeper boot space into which you can stow even more of your stuff, the physical effort of lifting it higher becomes real tiring real quick.
I don't have sprogs but even I can see the logistic ramifications of hauling them around. If they are really wee tackers, then you're going to need a stroller to carry them around in, when you leave the vehicle. Even if you have one of those super space age strollers that I see the impossibly plastic people of Mosman carry their offspring in, the kind of stroller made from titanium and with wheels that belong on a mountain bike, that thing still weighs something and it's simply easier to lift it into a normal station wagon than it is a CUV or SUV.
I had a look inside the boot of the Toyota C-HR and to be honest, it wasn't that much of an improvement over a regular normal Corolla. This is where style has triumphed over form, to the detriment of practicality. Also on this note, when your​ sprogs get a little older and start toddling around under their own power and you get tired after chasing them around, in a normal station wagon you can just lie down and have a kip, whereas​ in a CUV or SUV that's impossible.

I wandered down to the closest Toyota dealership from where I work and decided to sit inside the vehicle. The front seats are perfectly acceptable and the C-HR looks like any other modern car. However, as the photograph shows, that rear window which is one of the styling cues of the car, is utterly terrible if you happen to be a small child.
When I was a wee lad myself, my sister had just moved from being in a booster seat to sitting without one. For a while she became incredibly car sick on many trips and this was partly solved by moving her to the front seat but the ultimate cure was time and her becoming taller. This meant that she had a better view of the world outside and that is incredibly important.
I sat in the back seat of the Toyota C-HR and imagined that I was an eight year old child. As I looked out of the vehicle, the only thing that I could see was sky. That seems to me like a recipe for much puking in the future for the owners of the Toyota C-HR. Congratulations, in chasing style over form, you've invited that tricksy fairy Simon Ella* to wave his magic wand and spin the spell of spew in your car.

I won't pretend that I've driven the C-HR but if is like the rest of Toyota's wares, I imagine that it will be competent but boring. Before I bought the Mazda 2 which I currently have, I drove a Yaris and really didn't like it at all, I drove a Corolla and thought that it was acceptable but I wouldn't have one through choice.
Toyota knows the kind of market that it is selling to. It knows that its customers want a brown bread sandwich where the filling is another slice of bread. It knows that people who want to buy a Toyota want to jump in and forget about everything. Toyota builds cars for people who want their motoring to be the same as buying a toaster; they don't ask much, they simply expect their cars to work.
In this segment of the market, there's the Ford Escape, Mazda CX-5, Honda HR-V, Renault Captur, and a whole bunch of options for people who want to make the dumb choice of getting a CUV rather than a station wagon or a normal hatchback. All of them make a mockery of the letter U in SUV by being less useful and of less utility than the other sensible options but the Toyota C-HR manages to combine that lack of utility with a lack of visibility for the kids in the back seats.

If you are a single person who still wants to go out and buy this thing, then go ahead and do it: people like what they like and I ain't going to stop you. The instant that you have children though, a whole new gammet of questions and decisions open up. It's just that the Toyota C-HR answers these questions badly.

*Simon Ella is one of the lesser known fairies. Unlike the Sandman who sprinkles his magic sand to help the kids get to sleep, Simon Ella is the man who runs around and dips his butt in salads and shaves carrots in the pile of spew that you've just made. He is the reason why people are afraid of Simon Ella poisoning and why there's always carrots in your spew even though you haven't eaten any carrots.
Simon Ella is the brother of Citröen Ella who uses the power of citrus to keep flies and cats away and who haunts some motor cars; hence the reason why they become lemons.
Posted by Rollo at 07:17