If I may be so bold that I'll just say something: I like 1966 Batman.
Since the death of Adam West, SBS on Viceland and on OnDemand, has been playing 1966 Batman and I have been really enjoying it; the weird thing is that I have been enjoying it unironically. 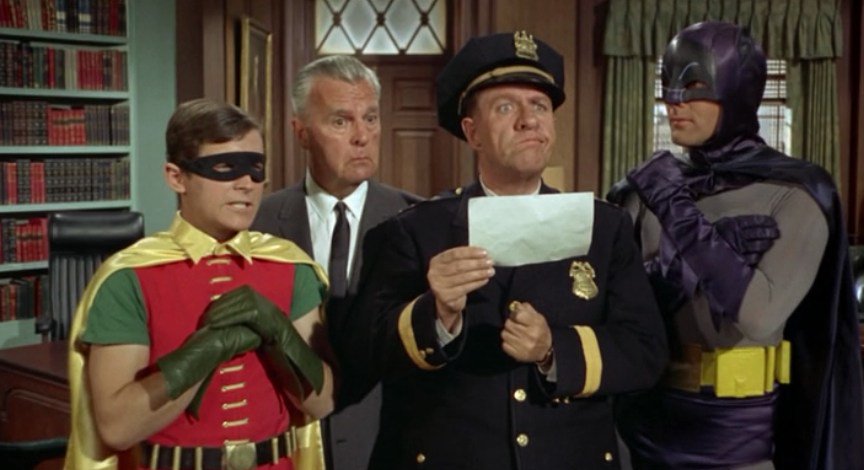 1966 Batman was pitched to CBS as a comedy series and immediately that poses problems for hard core superhero fans. If the last decade of cinema has been anything to go by, those fans want something darker and edgier and yet 1966 Batman is neither of these things. It is gloriously self aware of how naff it is, from the absolute earnestness of the acting and especially Adam West's, to the fact that everything is unnecessarily labelled, to the fight scenes which are badly choreographed fisticuffs overlayed with "Pow!", "Socko!" and "Splat!" title cards and blasts on the trumpet, to the iconic theme song which by any possible objective measure is rubbish.
In principle you have a superhero comedy show, which actively cheapens the idea of a superhero television show and makes a mockery of the genre. Perhaps that's why I like the idea of 1966 Batman so much. 1966 Batman is from the outset a comedy series, so it has no need to either take itself seriously, nor explain itself, nor maintain a hard sense of internal logic. It is what it is and is better for it.

Comic book fans like any proper fans of anything, are obsessively obsessive. They love their chosen fandom unironically and so there is something noble in that. However, when it comes to superhero comics, I was never one of those people.
I could never be that obsessively obsessive.
The reason, I suspect, is that I was never prepared to put in the effort to be as obsessive as the genre demands. Superhero comics are incredibly dense pieces of media with expansive back stories and internal references. For someone trying to enter that from the outside, it seems almost impregnable and this probably helps to explain why so many of these modern films need to include a back story. The amount of time and effort which it takes as an investment into those references and back stories, was more than I cared to spend. Although having said that, I don't think ill of anyone who has done so because people like what they like and to buy in on something unironically is a fun thing.
On the other hand, the investment required for 1966 Batman is minimal; it makes no attempt to explain any of the back story at all. The reason why millionaire Bruce Wayne has decided to become a vigilante is never given. The reason why Bruce Wayne has adopted Dick Grayson as a ward is never given. The reason why Dick's aunt Harriet Cooper has come to live with them is never given. The show makes no attempt whatsoever to explain anything within the universe and as someone watching it from the outside, who isn't a fan, it makes the series incredibly accessible. I don't need to know a whole bunch of stuff in order to watch this show.

Another element of 1966 Batman which I find especially appealing is that I know that it knows that I know that the show is naff. Critics might rag on the inclusion of labels for a whole bunch of things, but that shows to me that whoever made the series, must have been versed in the visual language of the comic books to begin with. The show is an attempt to bring the style of 1940s, 50s and 60s comic books to the small screen and it does so by riffing on the existing visual language that it was given.
As a fan of radio shows such as The Goon Show, Round The Horne, Dragnet and more modern fare like Doctor Who, Poirot and Undone, I understand the need to throw away the "show, don't tell" rule when the need exists. I also rather like the overacting of The Joker, The Riddler, The Penguin and the rest of the villains. The show has an utterly brilliant internal visual and audio style, which is designed to let you know that the villains are villainous and the heroes are heroic. From Cesar Romario's ham acting, to the camera angles which are always tilted when the villains are coming up with their terrible schemes, 1966 Batman knows what it is.
The premises are often "villian of the week" steals some valuable jewels and while that is a trope as old as the hills, that still plays into the style and language of the genre. It means that every pair of episodes is self contained and even that is kind of like two halves of a 48 page comic, with the staples in the middle.

I couldn't very well write a post about 1966 Batman without mentioning the Batmobile. It doesn't matter which iteration that you're talking about, the Batmobile is surely one of the icons of the mythos and almost nearly deserves to be included as a character in its own right. I have seen at the library, a coffee table book of about 500 pages, which only looks at the history of the Batmobile; that's how important it is.

I have no idea how CBS managed to get Ford Motor Company to give them the Lincoln Futura prototype show car but that was a stroke of genius. Batman's car is obviously Batman's car and yet it is both plausible and ridiculous at the same time. Within the series, where styling cues have moved on from the fins of the 1950s, the Batmobile itself looks dated against the squarer cars which were contemporary. Within the series, the Batmobile looks dated and yet precisely because it is all swoopy and clothed in 1950s futurism, it is perfect. I suspect that at the time, they knew that a golden age of car styling had passed and had the Batmobile been a 1966 Chevrolet Impala, it would have looked stayed and stodgy.

I also like how because of the limited budget, the producers of the show mostly dispensed with high tech gadgetry and the entire of just about everyone's arsenal is a collection of spring loaded devices and smoke bombs. I like that when Batman and Robin need to climb a wall with the Bat-rope, the visual effect is obviously that they tilted the camera sideways. I even like the diabolical laughter, diabolical dialogue and diabolical acting in the show.
Presumably if you were going to make a Batman television show in 2017, you'd want to have a good visual effects team, you'd write the show to be dead serious, and Batman himself would be brooding and sombre. That's fine I suppose but all of that requires a willing suspension of disbelief on the part of the audience. 1966 Batman enters through the stupid part of someone's brain and the amount of effort to enjoy the show is minimal.

This is the thing about the superhero genre in general. I don't really relate to the characters because the world is so unreal as to be unenterable for me. I don't care that Superman has super strength, sight, hearing and whatnot because he's as dull as dishwater. I don't care that Peter Parker was bitten by a radioactive spider. I understand that the X-Men are all outcasts and I kind of see the motives in that world but again, it's not enough to make me want to care. I can make a pretty good case that although Superman supposedly embodies everything that we are supposed to be, he himself is an insufferable git. Peter Parker comes off as a whiny little swat, except in the animated series where because he had no dialogue, he ventured into the realm of the surreal. The X-Men are an ensemble cast who are designed to tick boxes and the only one of any interest is Wolverine but even then, he's too boring to make a series about.
Batman isn't a superhero. In 1966 Batman, he makes no attempt to be one either. No, Batman is a rich dude who just happens to own a lot of stuff. In every single version of the story, Batman's super power is buying things; Batman after it is all said and done is just a dude. In 1966 Batman, he is a rich dude who happens to own a bunch of really stupid stuff, which also happens to include a nuclear reactor. He also isn't particularly good at being a superhero either. He rather earnest though.

Just like one of those old video games where if you go out one side of the screen you pop back out of the other, 1966 Batman is so twee, the acting is so obvious, the dialogue is so disasterous, that it is a work of brilliance. It is absolutely tied to the date which it was written in but that doesn't matter. 1966 Batman is gloriously dumb and just over fifty years later as the world has tilted towards permanent outrage, darkness, and takes itself way too seriously, I'd go so far as to say that it is the best thing currently on television.
Posted by Rollo at 07:17