One of the things that infuriates me about the way most people play Monopoly is that they don't actually follow the rules as written. Every single  so called "house rule" that most people play by, always invariably makes the game worse. Putting taxes and penalties for someone to collect when they land on Free Parking is an abomination. Traveling around the board before anyone buys property is a nonsense. Worst of all, people object when you bother to conduct auctions for property that has been turned down - in my experience, those very expensive properties are overvalued and so buying Regent Street for £186 at auction is a net good.

I use the game of Monopoly by way of example because it illustrates perfectly, why I like it when people follow the rules. Rules and laws are for the standardisation, regulation, and protection of society, and when society is playing by the same rules, everything just works properly. The game of Monopoly, when it isn't played according to the rules, becomes a horrid thing that nobody likes; the reason that I suspect that the game is so much maligned is that virtually nobody plays it properly. Monopoly when played according to the full and proper rule set, actually only takes about 45 minutes and is less about mindlessly moving around the board and more about tactically making trades with people.
A similar thing to think about (and one which is far more critical to people's lives) are road rules.  Think about it. We hurtle down the road at 60km/h, past houses, pedestrians, and other road users, and we do it in our own tonne  and a half metal box and what should be remarkable but is so mundane that nobody ever thinks about it, is the unwritten boredom of the fact that everyone gets to where they're going with comparatively few accidents.

We feel violated when people don't follow the rules and it is no surprise that that same word "violation" also applies when someone breaks the rules. Now this isn't some moral rant about law keeping, although it's probably a good idea to follow the law in every circumstance that you can except when it seriously violates your particular set of religious values, no, this is a rant about possibly the most petty kind of rule following that I can possibly think of: the rules of queuing. 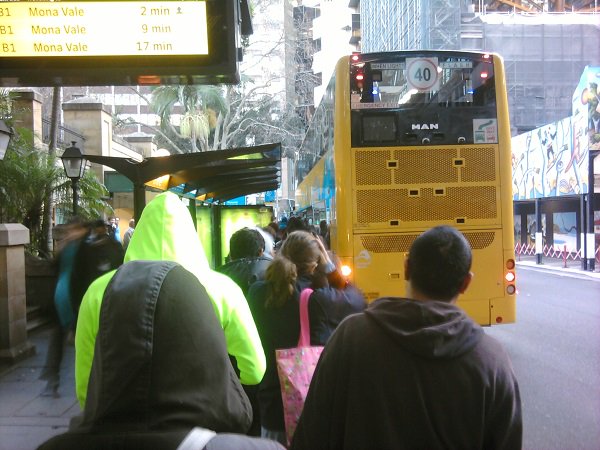 Everyone knows how a queue works, right? Wrong! Every single work day, without exception, I experience my own personal eleventh circle of hell just by standing in a straight line.
A queue, and I need to explain this because it is painfully obvious to me that people either don't understand or more likely don't care about the concept, is when a group of people form an orderly line while waiting for a thing to happen. That thing might be in a bank, or a supermarket, or waiting for tickets to a rock concert or Wimbledon, or as I usually experience it, waiting for the B1 bus to Mona Vale.
The thing that does my rag, makes my hair boil and my blood curdle, and gets my hackles, feckles  and schmeckles up, is that without fail, there will be a group of us who will form an orderly queue and respect it as though it were a basic building block of civil society, and there will be another group who arrive later than us and form a clump around the bus door and get on the bus before people who have waited patiently and calmly. A spontaneous condensation of order while waiting for the bus to arrive is both beautiful and noble but a disorganised rabble is precisely that.

The best experience that I ever had in a queue was in central London when I was waiting for a bus at a bus stop sign and someone came up and asked "are you a queue?". Yes, there was only one of me and so the idea that a singular person could be considered a queue was so delicious that that possibly ten second conversation has remained with me to this day. Here was a person so keenly attuned to the fact that not so much rules but the keeping of order is how society functions well.
When you have people who not only jump the queue for the bus but deny its very existence, that sends a very clear and present message that those people simply do not care. Not caring might seem almost trivial (and this is why I pick on this specifically) but when you multiply not caring about each other by a factor of a quadrillion, by fifteen orders of magnitude, then selfishness flourishes and then begins to manifest itself in cruelty.
The B1 bus is emblematic because it passes through the electorates of North Sydney and Warringah. The people who get on the B1 bus because they live in the area, are the people who have been represented by MPs who have been the Treasurer and the Prime Minister; who have had the ability to exact power through enacting legislation. Selfishness multiplied by fifteen orders of magnitude is a perfectly good explanation as to why we have MPs actively looking to destroy and privatize the institutions of the nation and why we are actually putting babies in gaol on tropical islands.

Selfishness multiplied by just this wee little order of magnitude means that people who have been waiting in the queue and following the unwritten and normal expected rules of society, will be actively punished for doing so.
I am regularly punished for waiting in a queue by those people who don't understand how queues work or worse don't care about how queues work, by either not getting a seat or as was the case this morning, not getting on the bus and then not getting a seat because of more queue jumpers who don't care about how queues work.

Suffice to say, I don't like being punished because I followed the rules. That makes me not want to follow rules at all because of negative reinforcement and that makes me want to not care about how queues work; which would only add to this eleventh circle of hell and make the game worse for everyone.
Posted by Rollo at 07:17