Some things that you'll see on Facebook in particular are pictures which contain vague sentiments which people then share. I suppose that they are intended as modern day proverbs of sorts and are supposed to provide some kind of motivation or short term well being. They almost always contain the instructions to share or like if you agree, because meme propagation works like a virus which infects one brain before popping out its message so that that brain can then repropagate the meme. The process works especially well when you have someone who is well intentioned but doesn't think too deeply about the thing that they're helping along; because they've already got their dopamine hit and have moved on.
My brain which I'm sure has been wired up differently to most people and then fed with a slightly different data set, looks at these things, wants to pull them apart and see what's inside. A meme virus gets into my brain and is then met with machinery which has been honed to identity and mutilate it. My brain is like a macrophage, which chews up meme viruses and then displays the mangled bits on the outside like some kind of dystopic hellbeast warrior.

The thing which floated into the path of my brain and was met with the machinery for mutilation was this: 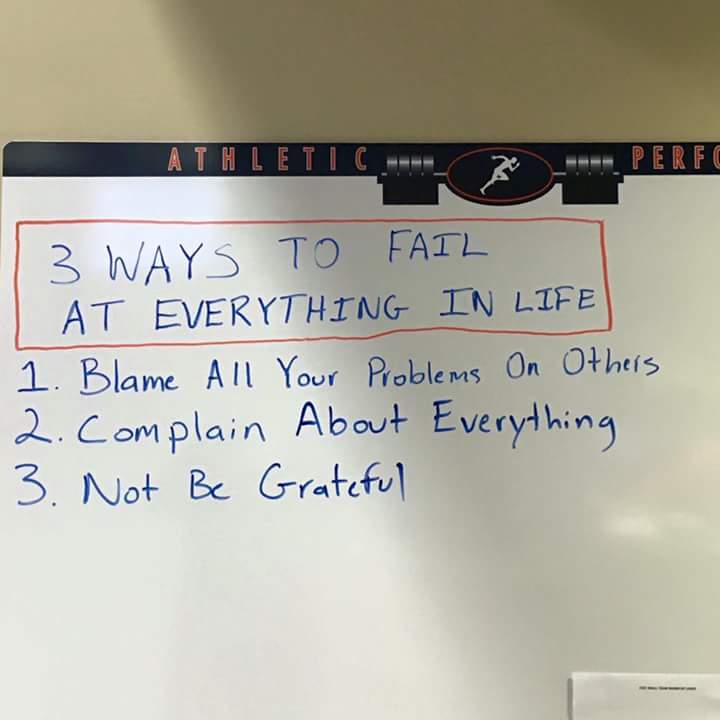 Not being content with letting this stand unchecked, I went to the home page of the one who posted this in the first instance and found that this was from a fitness instructor. Now I'm sure that this in context is supposed to be motivational in a particular kind of way, where the individual is supposed to take responsibility for their actions; which given that this was from a fitness instructor is trying to get people to go to the gym more often I guess. Maybe this is supposed to guilt someone in to buying more time and/or classes with a personal trainer. Whatever the case, I'm sure that in situ that this was designed to be inspirational for the kind of people who are likely to frequent a gym.

Ah yes. Except.
Motivation, the modern day proverb, the mind killer, the instant injection of dopamine to a brain that hasn't thought too deeply about the meme which just went into it, the anesthetic of critical logic, it has a proboscis. It is able to pierce the outer shell of the mind before injecting its little cache of information; which is just enough to turn that brain into a tiny little factory that manufacturers and repropagates the meme.
Except.
My brain does not respond well to this. It has seen this kind of thing before and is already ready, willing and able to deploy the necessary machinery to identify and mutilate this; before displaying this on the outside like a dystopic hellbeast warrior.
I'm pretty sure that in context, that this was supposed to be motivational but out of context and on display in a very different world, my brain interprets this as aggressive and accusative. My brain is not content to let this be but wants to pull this apart and see how it works. This meme having passed through my brain will not be repropagated all that easily.

Let's weaponise this and see how it works out there in the real world. Let's apply these rules to the real world and see if they apply, shall we?


The Gender Pay Gap.
1. The reason why women are generally paid less than their male counterparts has nothing to do with systemic misogengy or sexism. Clearly it's all their own fault. Stop blaming males for looking out for their own.
2. Shut your faces ladies and quit complaining. Complaining only means that you fail at life..
3. Be grateful for the fact that we pay you anything at all.

Racism
1. Stop blaming white people for being racist. If someone chooses to be “offended” by opinions of others, that’s their choice. There is no “right” to have people not say things you find offensive; none at all. Free speech is more important than your feelings, sorry, not sorry.
2. If you are from a group which is openly being targeted for abuse on a daily basis, then you need to shut your faces and quit complaining. Complaining only means that you fail at life.
3. Be grateful for the abuse you cop. You should be grateful for the words of other people.

Wage Theft
1. It's not the fault of employers that they can't make a profit without literally stealing wages from the hands of vulnerable people. Stop blaming employers for taking the food off your table and work harder.
2. Don't complain about your wages being stolen. The golden rule is in operation; so that means that whoever has the gold makes the rules and that isn't you, so quit complaining. Complaining only means that you fail at life.
3. Be grateful for the fact that you get paid anything at all. In the past, people used to be slaves and were the chattel property of the people they worked for. If you don't like it, leave.

I hope that I've made my point.
These three rules are awful and barbaric.

I hate the sentiment here. Perhaps within the realm of a motivational quote they are useful but outside of that, they are a club which can be used to beat down on people. The three obvious retorts are:
1. Some people's problems should be blamed on others; specifically the people who caused the problems.
2. Some things should be complained about. A complaint is a declaration that something is unsatisfactory or downright unacceptable. There are things in the world which we simply should not accept.
3. Being grateful for the bad things of the world which have been perpetrated by other people is either the sign that someone has been defeated or they are too ignorant to know what's happened to them and I don't mean that pejoratively either. Some people are ignorant of what's happened to them because they haven't learnt something or have never been exposed to it. Maybe they just don't know what they're entitled to because they've never had their rights explained to them.

What I found after following the link to the person who posted this iteration of this picture was the post immediately under it which read:
"Bitch slap your woman. She deserves it."
If that doesn't make the point concisely then I don't know what does. Immediately my brain went into rage mode because here was the perfect illustration of just how awful and barbaric the outcomes of these three rules are. If we were to apply those rules to whoever this chap's lady friend is then.
1. She shouldn't blame her problems on him, even though he advocates domestic violence?
2. She shouldn't complain about being treated badly?
3. She should be grateful?
I'm sorry, this is beginning to look like gaslighting. These three rules when enforced are little more than attempts to gain more power, by making their victims question reality. This sounds to me like the tactics of people like narcissists, cult leaders, abusers, and dictators.

In just about every possible realm that I can think of, the things which cause the greatest harm in people's lives, is a concentrated lack of love or concentrated stream of anti-love aimed in their direction.
Whether it's to do with an undervaluing of someone as a person, or of their dignity, or trying to destroy and degrade their conditions for the purpose of extracting profits, or a basic hatred of someone on the basis of their gender, race, religion, socioeconomic status, nationality, state of poverty, I think that this more than those other three rules contributes to someone's failure at life more than anything else.
While I will absolutely concede that hard work and making efforts to better yourself is absolutely and unequivocally a very big contributor to someone's success in life, if someone is unloved in real material ways, because of systemic reasons, then all the efforts in the world are not going to be enough to bridge that gap.
What I am getting at here is that nobody in the world is a self-made success. Nobody in the world gets to be a billionaire based solely upon their own efforts. The way to be successful in life is mostly based upon the collective efforts of a lot of people who work together to produce something which is bigger than the sum of their parts. Possibly the greatest single invention in the story of both economics and capitalism is the limited liability corporation, which by definition is a collective ownership group which just happens to have liability limited to the extent of the ownership of the shares therein.

The way to utterly fail at life is to be unloved and to be excluded from the things that would have made you a success. In essence, this is the story of power punching downwards and it surely is a truism that a great inequality of power inevitably leads to violence; either by people exercising power in order to maintain it, or by the great collective of people who are being made to suffer who decide to want to claim some of it back.
Brutus in Shakespeare's Julius Caesar said that "the abuse of greatness is when it disjoins remorse from power"; which if you happen to be unfortunate to be on the other end of, means that you will suffer directly because of a demonstrated and pointed lack of love.

When you think about the various instruments and pieces of legislation such as the Universal Declaration Of Human Rights (1948), International Covenant on Civil and Political Rights (1966), Convention Relating to the Status of Refugees (1951), The Convention On The Rights Of The Child (1989), The Racial Discrimination Act 1975, The Sex Discrimination Act 1984, The Abolition Of Slavery Act 1833, Commonwealth Franchise Act 1902 &c. they are all designed to limit the exercise power and anti-love, and to provide agency and remedy to those people who would suffer if power was unrestrained.

Of course it would be remiss of me not to express this in the positive; so here it goes.

The 1 way to succeed at everything in life is:
1. Love and be loved.

That's it.
No really. That's it.
Love people. Treat them with dignity and respect. Pay them properly. Make sure their needs for things like food, housing, adequate medical care, education, civil and political rights, security in their homes and security of their person, are respected and protected. Enact legislation which limits the abuse of power.
If everyone did this as their prime motivation, then I am sure that many of the injustices of the world would disappear very very quickly. If we actually collectively bothered to love people, then we would show concern for their circumstances and try to lift them up.

Also, reject disinformation like the stupid set of rules which prompted this.
1. Blame all of your problems on the people who caused them and actually hold them accountable for remedying them.
2. Complain about everything, then improve things. Complaints are statements that something is not right.
3. Never be grateful for the abuse of power.