The big thing that you learn as a grown up is that not only is change inevitable but that just like the grown ups who came before you, you will not change and there will be things that the youff do and don't do that will leave you in a state of utter bewilderment.
The kosmos also has a habit of leaving detritus from previous versions of itself. If these bits of stuff last for a sufficiently long period of time, they then become the subjects of history and archeology, and academics will view those bits of stuff with wonderment which is the exact inverse of the bewilderment that grown ups feel as a result of the kosmos perpetually changing itself.

I was faced with this sense of bewilderment yesterday when I was walking around a thrift store and stumbled upon this piece of furniture: 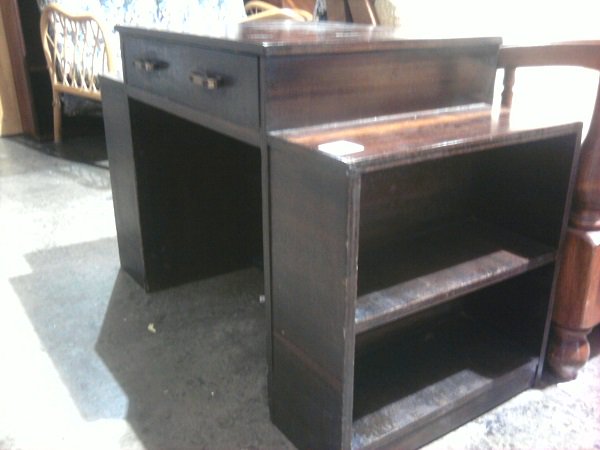 To the untrained eye, this looks like it might be a television table. That in itself is a curious thing as televisions have ceased to be impossibly heavy boxes filled with magic electronic goblins and thought wires. Upon closer inspection though, this low table has shelves built into the sides and the fact that it has a space underneath the centre of it indicates to me that this is an even older bit of cultural detritus.
This was probably sold as a telephone table. It probably also had its own little stool which nested in that space.

For the youffs who are reading this (and I already know that you're not because this is a piece of many words and only one picture (how boring!)), in the olden days when there was only five television stations, before the internet could fit in your pocket, and before everyone had their own personal telephone which they carried around with them, the telephone was a thing attached to the wall, which only one person in the house could operate at a time and which had its own piece of furniture which it stood upon.
If you wanted to make a call, you had to push buttons of the number that you had to remember, or use a spinny spring loaded roundabout thing to dial out, and everyone in the house would listen in on your half of the conversation. It was like having the comments section of YouTube, or the squawk boxes of Twitstagram, Instaface, and Whatsbook, coming at you in real time by people in your own family. If you weren't around, then the only way that someone could leave you a message was if someone wrote it down on a tortured piece of paper.

Of course I realise that by my noticing what this thing is and that the kosmos has changed around me, I am instantly qualified to call myself old. I also give away that I come from a very particular place in space and time in that I grew up in an analogue childhood but almost exactly as I hit adulthood, the kosmos decided for itself that it wanted to go all digital.

This came along like the perfect storm in my mind because only that morning, I had been listening to a podcast in which the hosts were answering questions which people had mailed in from across the world, on Christmas Cards. Christmas Cards are a delightfully analogue piece of tech that began on a commercial basis in 1843, and took advantage of the brand new-fangled penny postage system which started in England in 1840. This is 175 year old technology; 19th century tech in a 21st century world.
I again show my bewilderment because I am old because one young'un wrote in from America and said that they had to Google how to write a Christmas Card, how to address an envelope, and how to put it in the post. When I were a wee lad, this sort of thing was taught in primary school because it was necessary information. One needed to know how to write a letter and truth be told that while I write a lot of business correspondence with a computer (because nobody in the world wants to see my handwriting - which was once described as like a chicken throwing up all over the paper), this is still necessary information. Is the basic skill of letter writing and addressing an envelope a thing that will now become part of on the job vocational training?

I looked at this telephone table as a reminder of my childhood and thought that although the kosmos that children grow up in today is incredibly different from mine, the remnants of that old kosmos still remain. They might grow up with a sense of wonderment as they look at the way which we all used to live, through the detritus which has been left behind; as I continue to look into a kosmos which is increasingly filled with ever more bewilderment.
Devices have become smaller and no longer require separate furniture. Televisions and music players don't come in massive wooden cabinets any more. Computers don't really need their own table but it helps. A writing bureau is a fancy fancy thing which once was necessary to conduct business but has also been replaced with that same device which you now get television, radio, and the telephone on; all in the palm of your hand.
Future history and archaeology will be told with today's furniture; which will also be looked upon with wonderment and that's also perpetually bewildering.
Posted by Rollo at 16:33