I think that I can now say that I have visited every train station in the Sydney Suburban Rail Network, with the trip that I made up the Carlingford Line yesterday. Although it is one of the shortest lines and therefore shouldn't be that difficult to get to, I found that both the getting there and the getting back was overly complicated.

I live in Marayong, which is on the Richmond Line. That means that there are no direct trains to Carlingford. There are also no direct trains to Clyde, which is where you need to change in order to get a to Carlingford because the line is operated as a shuttle service with two trains heading back and forth. My journey to Carlingford involved a train to Seven Hills, another train to Parramatta, yet another train from Parramatta to Clyde, before the actual Carlingford Line train itself.
When you add to this, temperatures in the high 30s, it is easy to see why on both journeys,  there was nobody else apart from myself in the carriage. Except for about a half dozen people who got off at Carlingford, the train was mostly empty. This if nothing else highlights why the trains should be held in public hands. The Carlingford Line would be a loss maker for a private corporation and there would be an incentive to close it down. Yet if that were to happen, then the loss of the service would be difficult to justify replacing and the people who use it during the peak periods, would have to drive their cars. 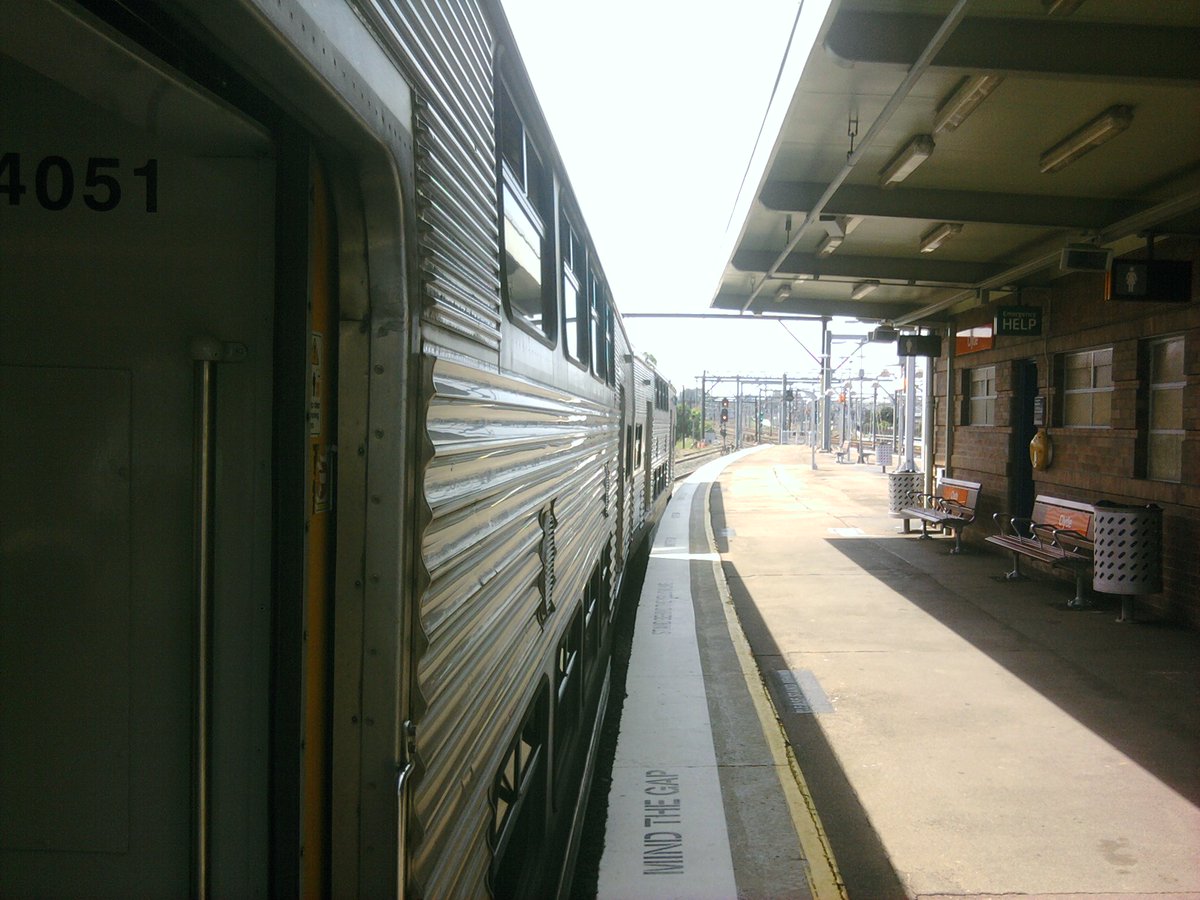 Clyde Station which sits on the main Western Line is now bypassed by most Western Line services. Under the current scheduling the newly minted Cumberland Line runs between Parramatta and the City Circle and is all stations. This puts us in the technically strange place of having a spur of a line which isn't actually accessible by trains on the line which it's supposedly a part of. I think that this warrants the Carlingford Line being restored to its former orange colour on maps, as a separate entity. 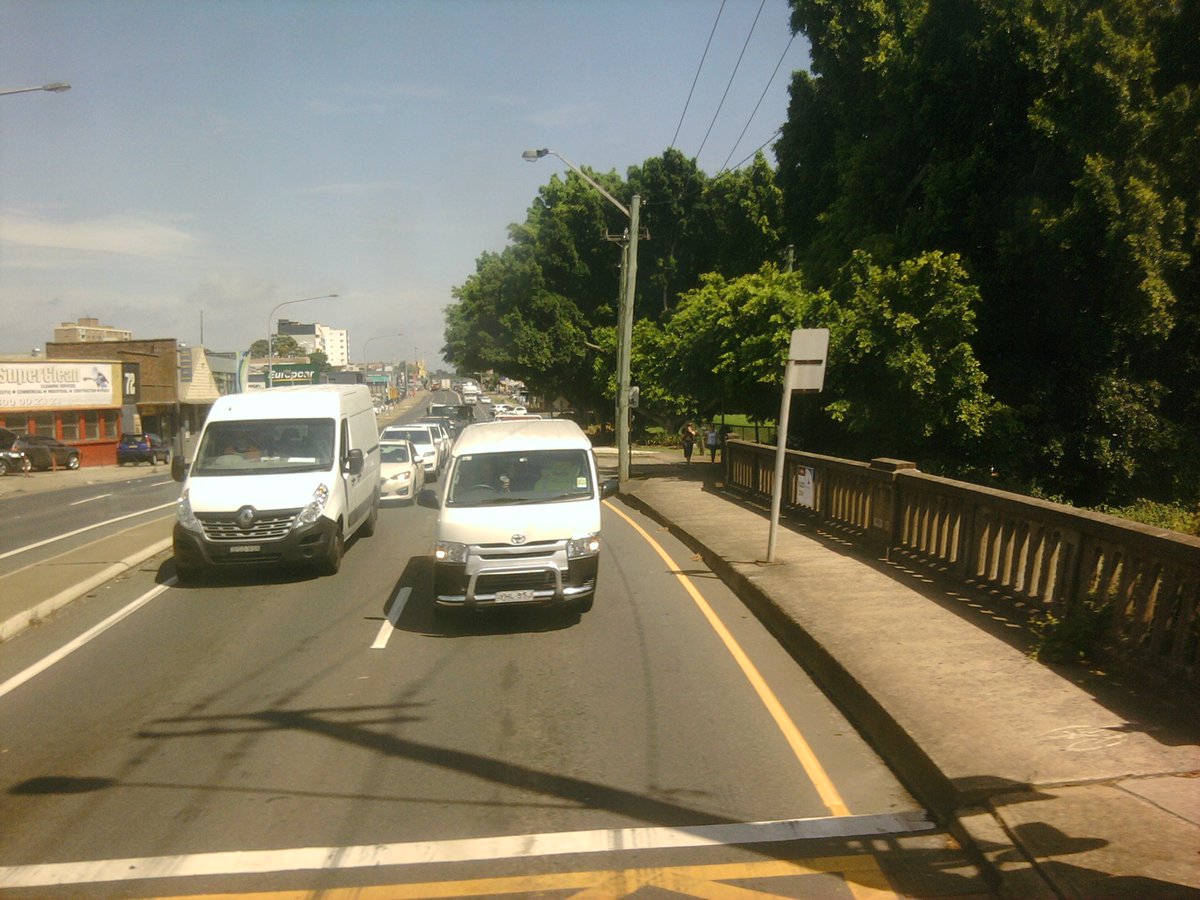 The line heads north and then crosses what I think is the last level crossing in metropolitan Sydney and it does so by crossing Parramatta Road. I think that the reason why this remains as a level crossing is to do with Parramatta Road being a major thoroughfare and it carrying many semi-trailers and other big lorries. A railway bridge might necessitate a pair of ramps with a rise which is so long that it's unfeasible to build it. the road can not have a bridge for the same reason. 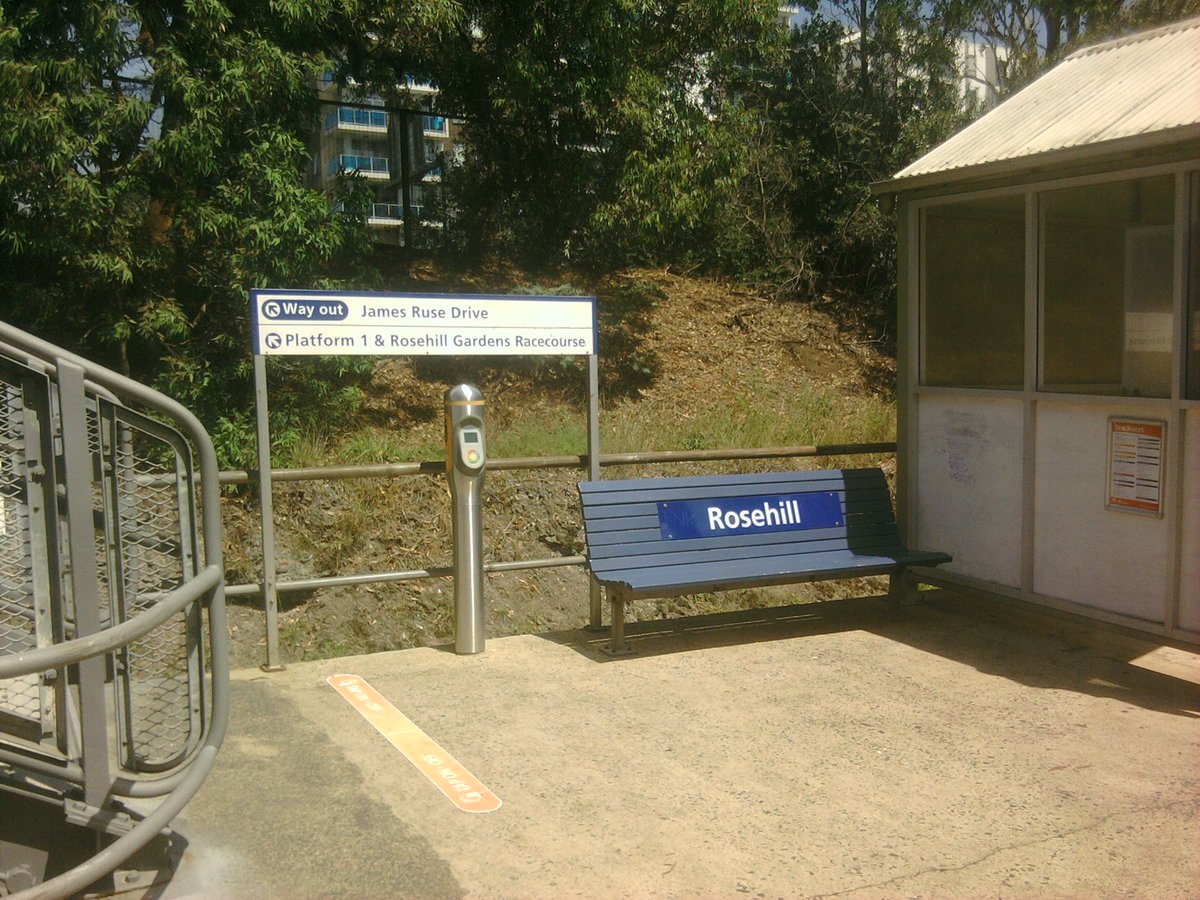 The first stop on the line is Rosehill. There looks to be a set of tracks running to the east, immediately to the north of the station which I imagine would have served Rosehill Racecourse but the station is already so close to the racecourse that Platform 1 has ticket barriers for it, just beyond the paid area of the railway station. Consequently, normal running service of trains happens on Platform 2. The whole thing looks like a temporary structure which has never been made permanent and I suspect carries so little pedestrian traffic that a more substantial platform need not be built. 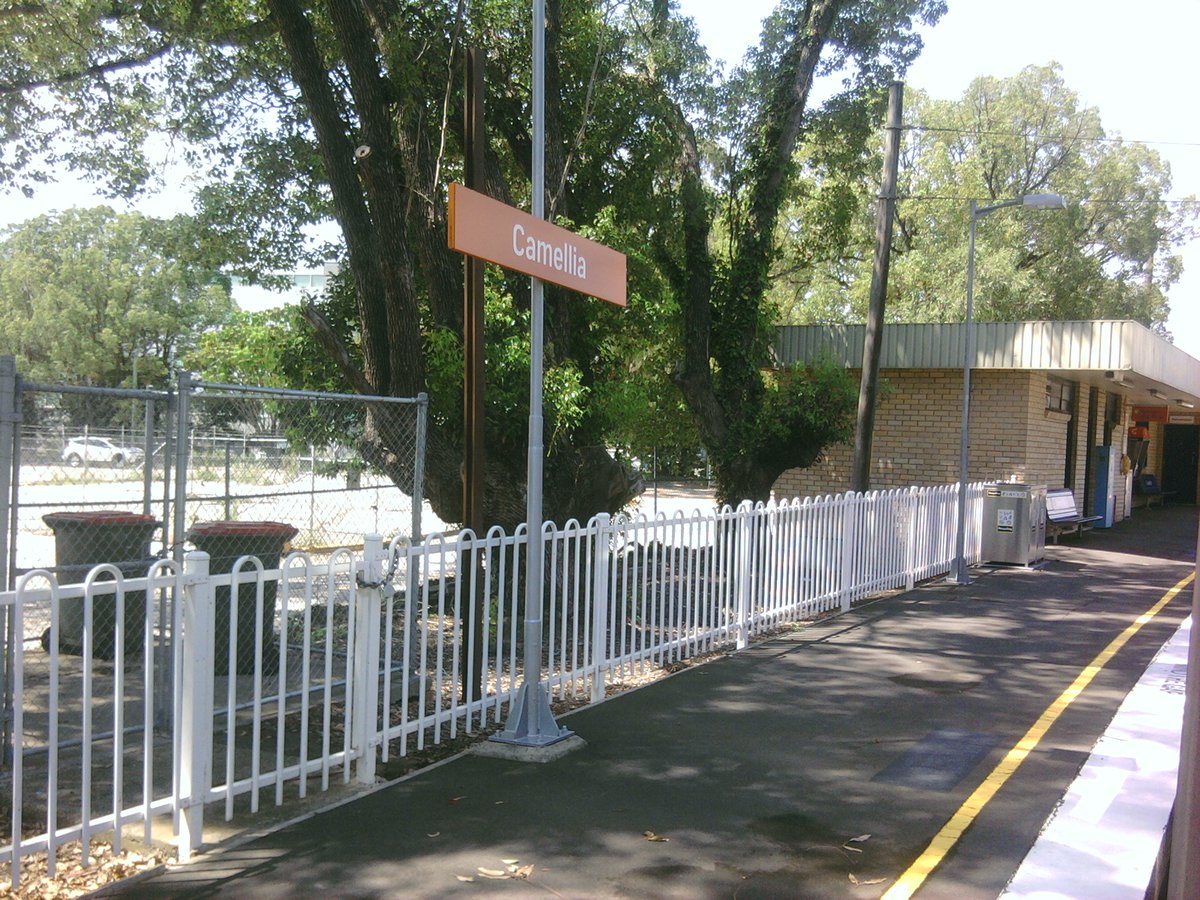 Next on the line is Camellia. Camellia as indeed every station until the end of the line looks like one half of a 'river' set of platforms with no opposite bank. Of course when you are on the platform, it looks like you are standing on an 'island' platform except that you have to remember that there is no other platform behind you.
Camelia Station sits in the middle of industrial land and there was a cement mixer parking lot on the other side of the street from the station. Also, on no fewer than four occasions up this line, Clive Palmer is telling us to Make Australia Great. I think that I prefer his big grinning whimsy than the other people who might want to use that phrase and have nefarious and racist intent. 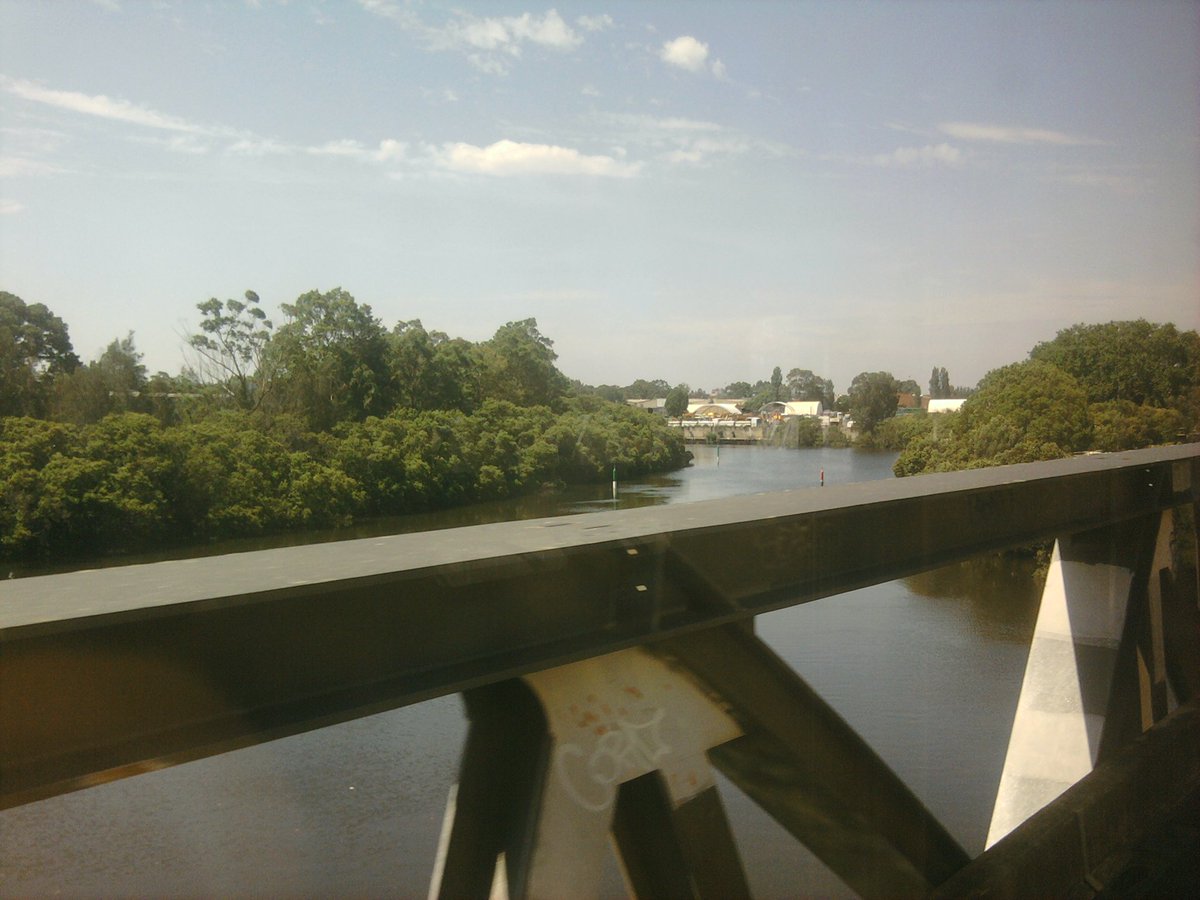 The line heads ever onwards and crosses the Parramatta River. The waterway which will eventually become so wide that that grand piece of metalwork which is the Sydney Harbour Bridge, is only a slow moving inconvenience here. Western Sydney University's Rydalmere campus sits on the north bank of the river and this brings us nicely to the next station. 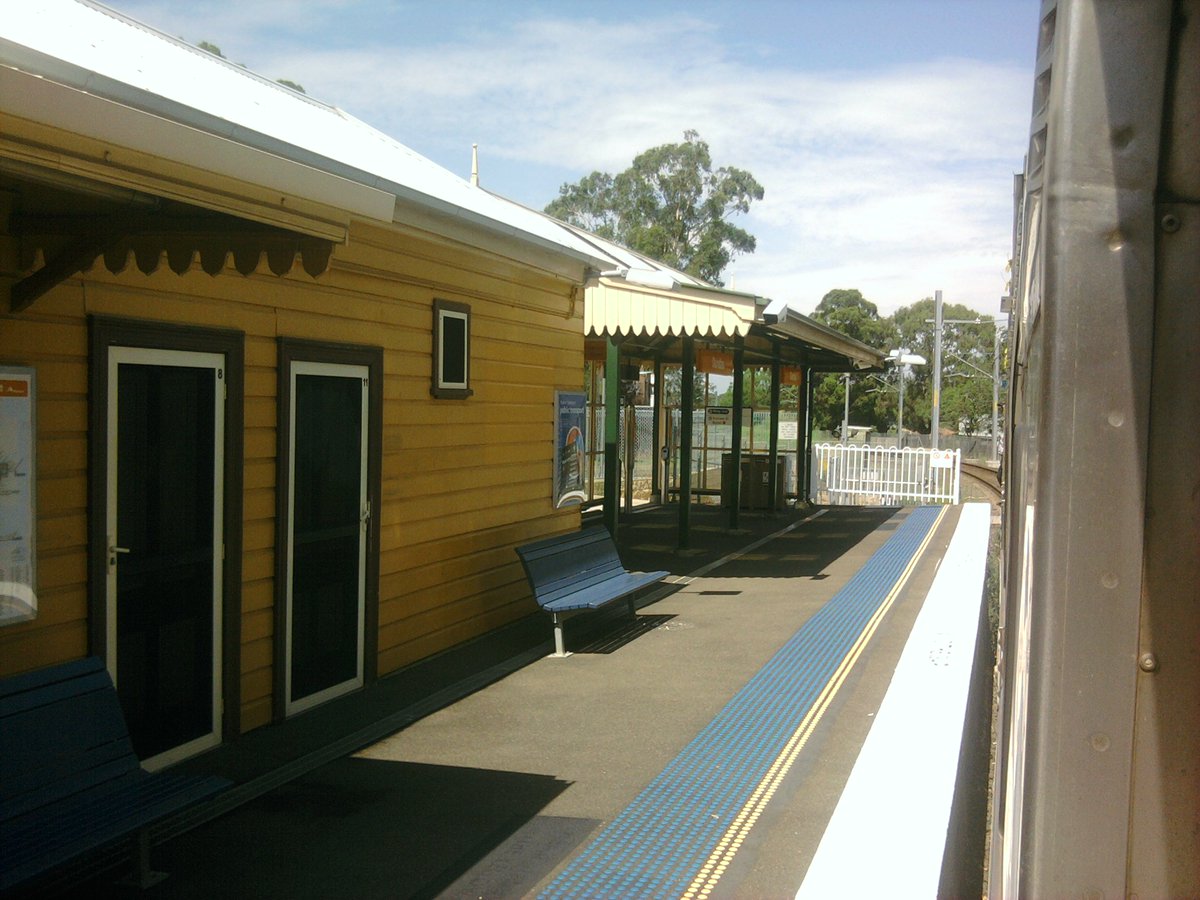 Rydalmere station is the prettiest station of the six on the line. This is only a short walking distance to the university and so is probably used by many students when school is in. On my journey though, when Australia passes within what seems like three quarters of a mile from the sun, nobody is around at all. 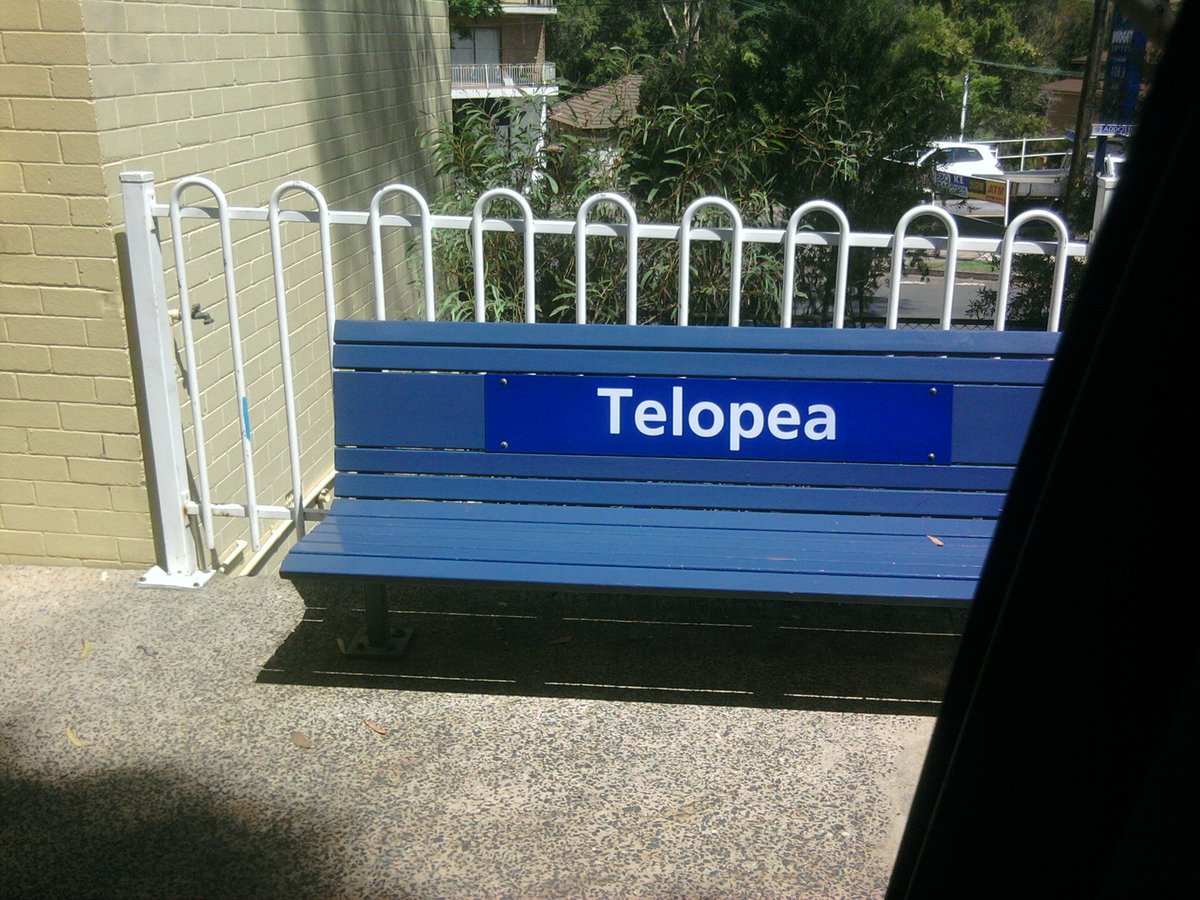 Telopea station is the only one on the whole line that looks to me what suburbia should look like. There is a set of shops on one side and I personally know the area because there is a local football pitch not too far away. Telopea had a set of buildings reminiscent of the style on the main Western Line and looked to be the most substantial of the set. 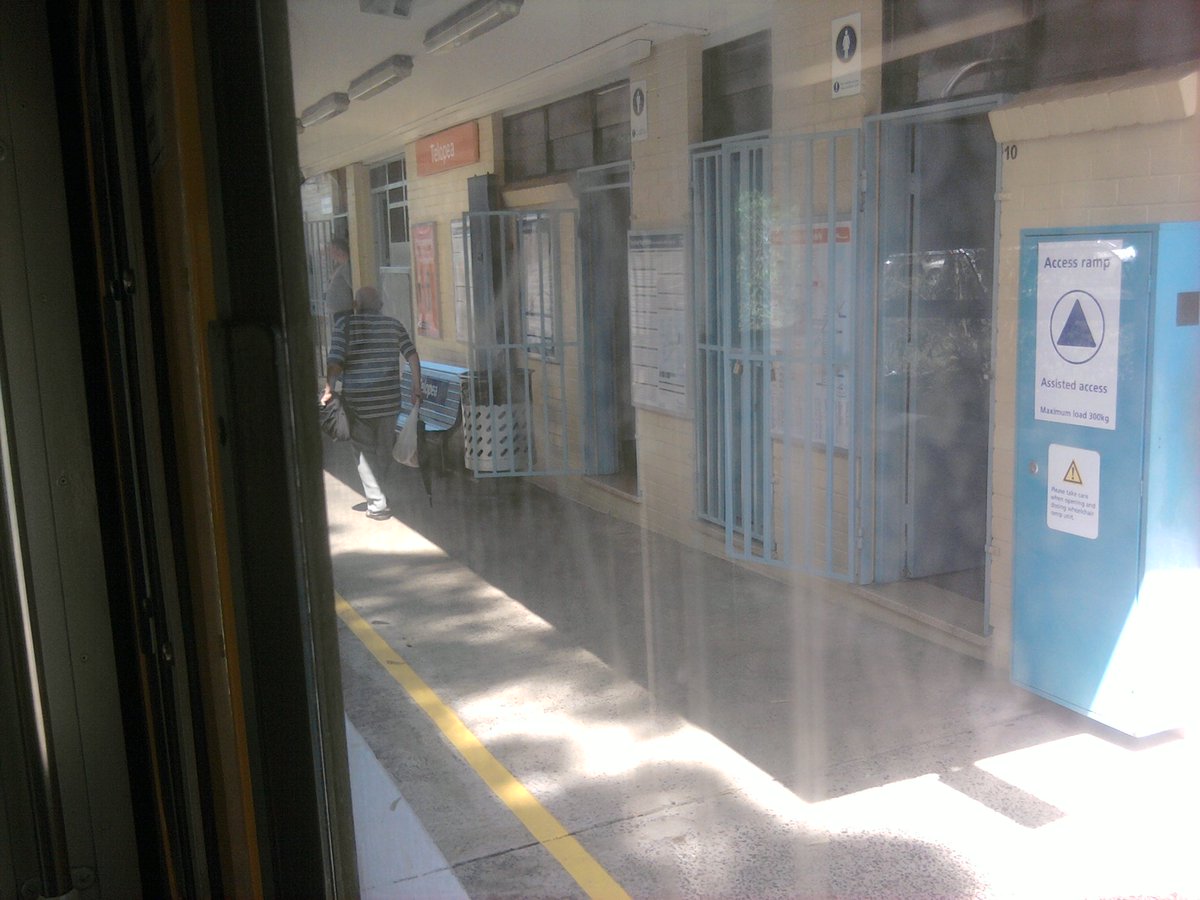 Heading further now to Dundas and there was actually movement of people who got off the train. The line in this part of the world had grass embankments on either side and again looked like this was an actual place where people live. Someone on the eastern side of the railway had a massive Australian flag flying from a flagpole as well as flags for Sea Shepherd, a Eureka flag, and a Jolly Roger. I am not sure what message that they are trying to send to people on the train - they like flags? 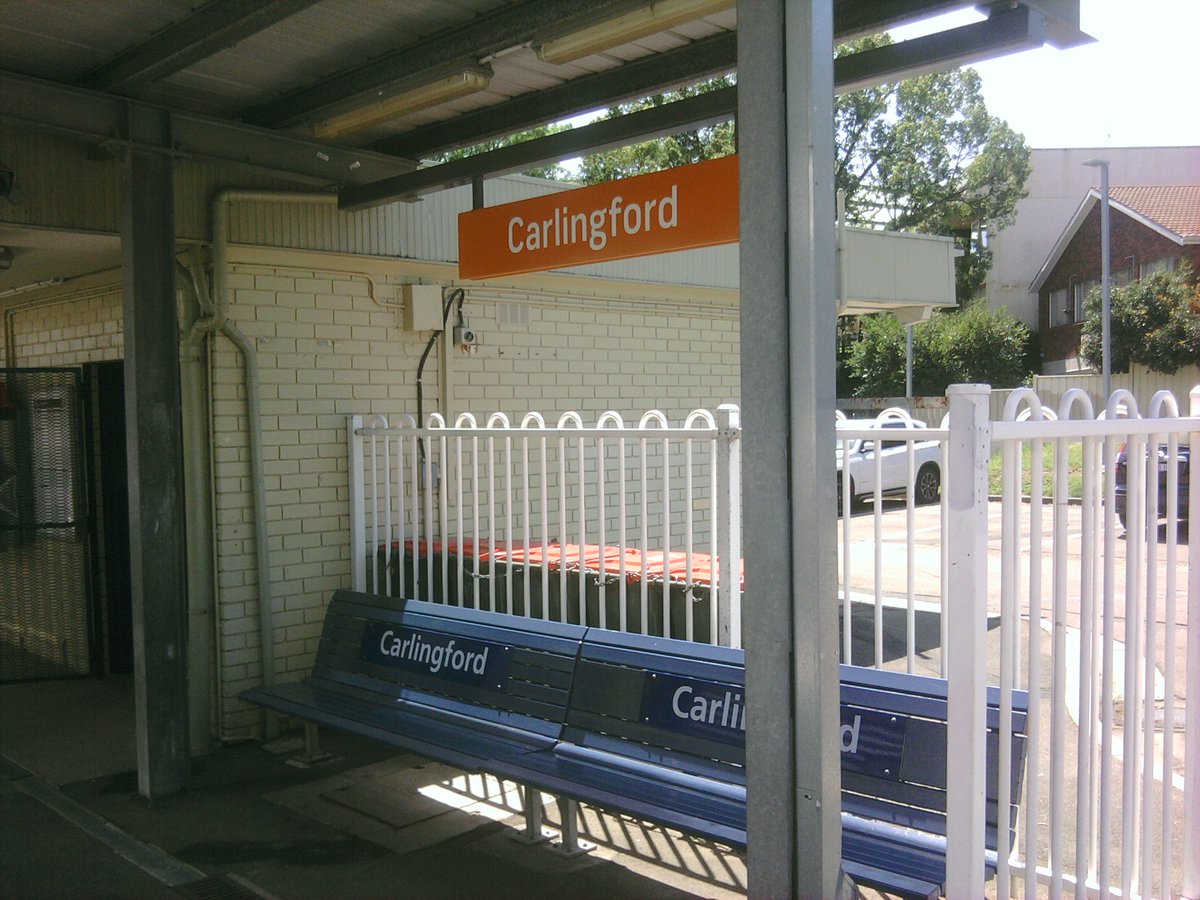 The last stop on the line was Carlingford. The indicator board, and this was the only indicator board that I saw since leaving Clyde, was one of the older style wooden framed ones with pieces of wood that would have rotated except here they didn't need to. The clock at the top of the board was manipulated by the stationmaster but the six destinations were fixed. 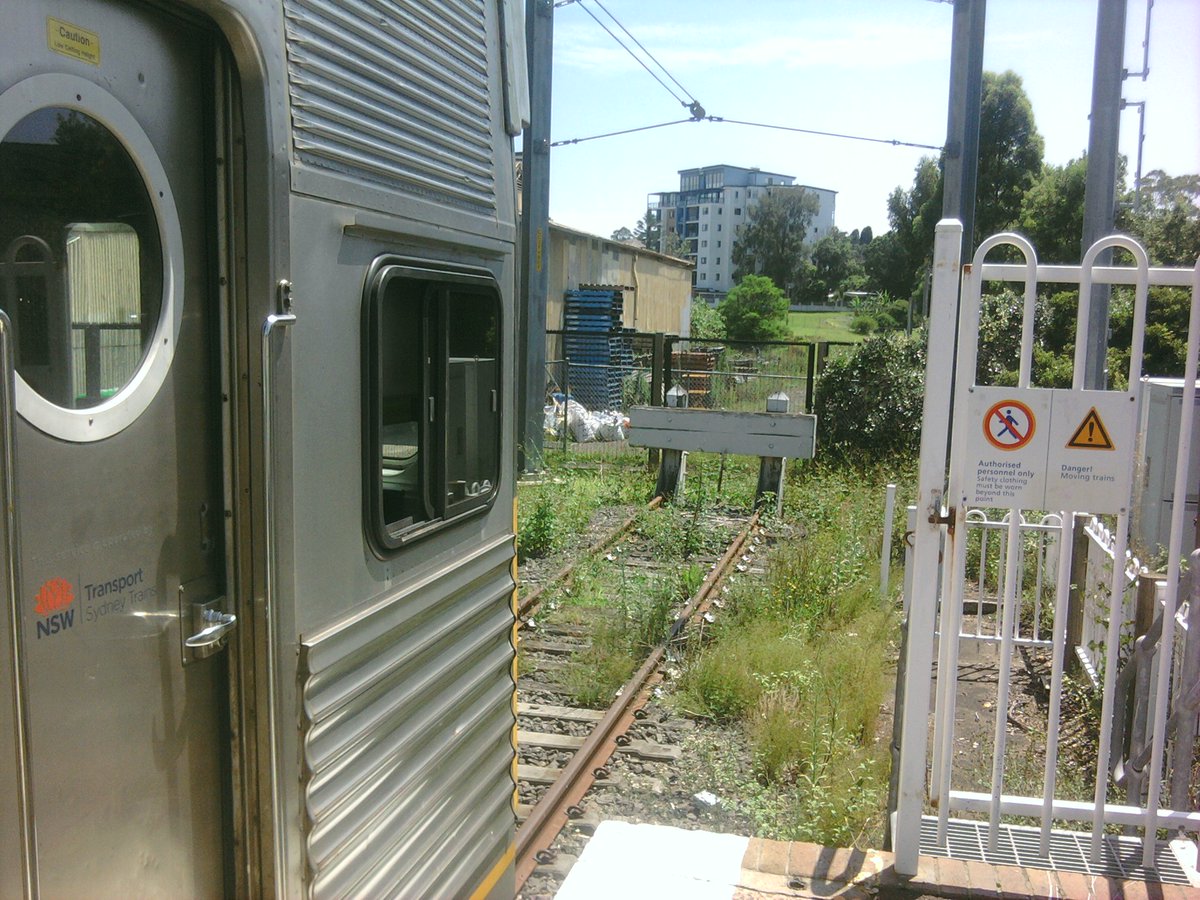 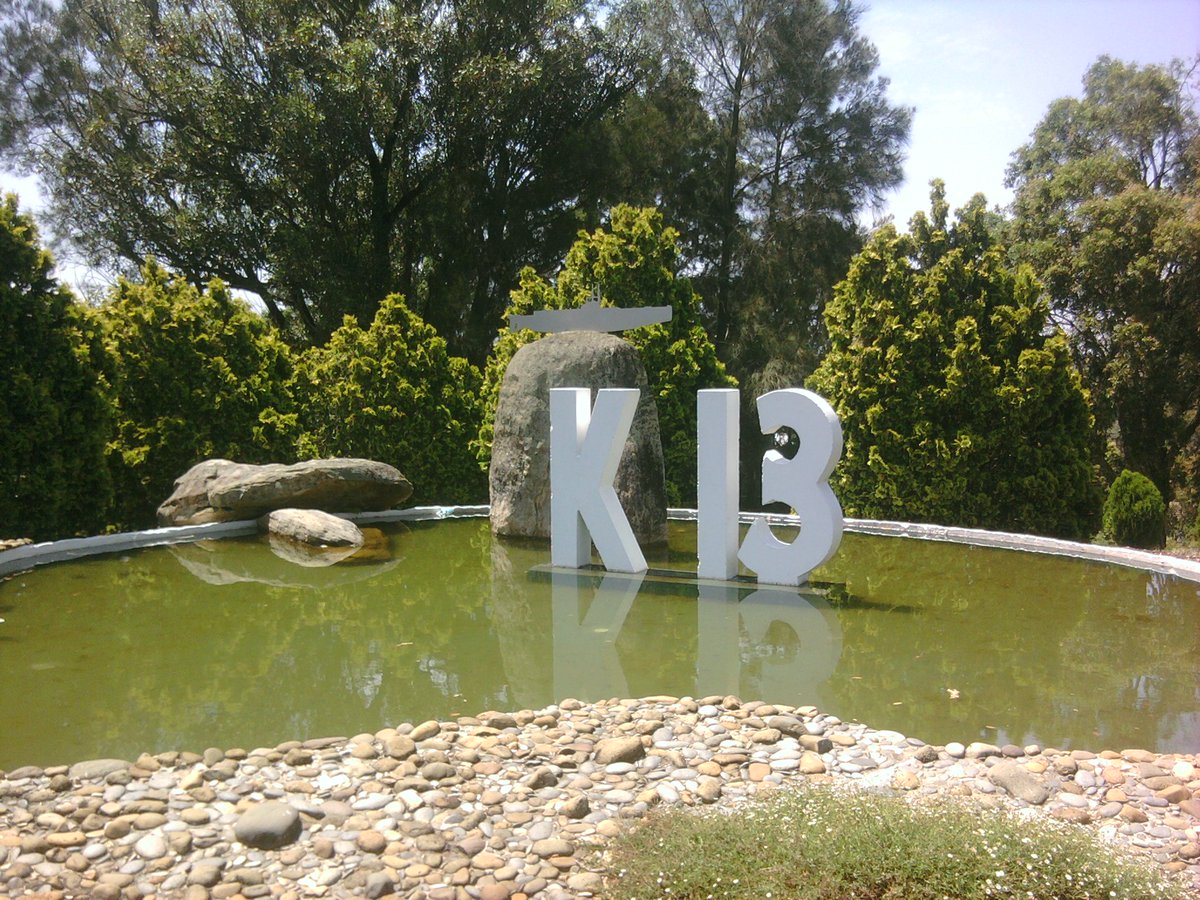 Also near Carlingford Station, on Pennant Hills Road, is the memorial to the submarine K13. 32 people on board died after seawater made its way into the engine room while the submarine was underwater.

I personally think that the whole Carlingford Line should be extended to Beecroft Station or Epping Station, both of which aren't that far away. As it stands, the whole line is a backwater that ends kind of in nowhere land. As there is only a single track for the majority of the line, and the trip takes 12 minutes, then there can only be a maximum theoretical service of two trains an hour. At Carlingford, that is expressed with trains leaving at exactly quarter to and quarter past the hour. I think that duplication of the tracks and extension north to a connection point, would mean that more people would have both cause and the ability to use it. Ideally an underground line to Epping would pass underneath Carlingford Court and through the rather populous parts of west Epping.

The difficulty in using the Carlingford Line and the fact that it ends up in the middle of nondescript suburbia is the reason why it suffers from such low patronage and also the reason why as someone who lives in this swirling conurbation we call Sydney, I have never had the need to use the line before and had never done so. It is a shame.
Posted by Rollo at 13:43