Horse 2568 - Equal Pay In Football: We're Done With The Question

The USA's demolition of all and sundry at the Women's World Cup has been, dare I say it, a joy to behold. Not only had they passed through the tournament undefeated but they had also never gone behind on the scoresheet, opened the account within the first fifteen minutes of every match except for the final, and included a shockingly impressive 13-0 thumping of Thailand.
With 57,000 people packed into the Parc Olympique Lyonnais, the final also looked like a world class event (because it was).

However, the spectacle on the pitch was to some degree of, mirrored by the spectacle taking place off of it. The Captain of the USWNT, Megan Rappinoe, declared that if they won the tournament that they would decline an invitation to the White House which caused a stir but the bigger issue was to do with the remuneration that the players are paid; which is an order of magnitude smaller than the men, despite them doing a similar job¹.
This also came to a very visible head, when after the final, the crowd started chanting "Equal Pay", in the presence of the President of FIFA, Gianni Infantino, and the French President, Emmanuel Macron.

As someone who lives in that curious place called the world, I think that the subject of equal pay for women should be a fait accompli. This should be so mind-numbingly obvious that even the President of FIFA should be able to understand the issue. As a case of moral philosophy, Megan Rappinoe's comments that "We're done with this" in relation to the subject of equal pay, shouldn't even need to be discussed. As an economic problem though, this is a little bit more complex than that. The economic problem is semi attached to a technical problem and the operation of markets.

It must be said that the Women's game is in fact different to the Men's game. From an absolutely technical standpoint, the game actually looks different because of the physical difference between the sexes.
Women are on the whole smaller and less strong than the men. That means that passes tend to be shorter, clearances are also shorter, shots are less powerful, and perhaps in compensation, the game itself tends to be far more technical.
Also, as a result of the referees having more control and the players having more respect for referees, it also means that the Women's game is harder because the players are harder. I can't even count the number of times that referees will simply just wave play on, rather than calling for free kicks and penalties. Whereas the men will fall over and roll around on the floor like little whingy babies at the slightest provocation, the women will suck it up and just play harder. The next time someone says 'kick like a girl' or 'fight like a girl', think of women's football, where in terms of spirit and hardness, they tower over the men's game.
Women football players play on the same sized pitch, for the same amount of time, and they play harder and more technically brilliant than the men. If quality rather than brute force was the determinant of pay, then the women should be paid more than the men but they aren't. 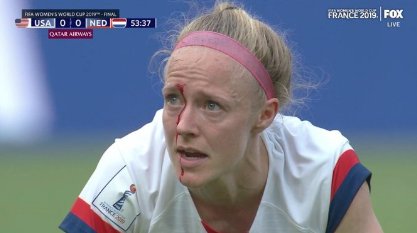 Seriously, what do I have to do to be paid properly around here? Bleed?!

The problem lies in the fact that labour in this case isn't fungible. A woman playing in the men's game would be windmilled and ragdolled by the other players. For that reason, labour isn't interchangeable between men and women's football. This means that the market itself throws up a set of issues.
Football taken as a labour market, has lots of suppliers of labour but only a very select few who can command superstar wages². The labour market for football players is hideously unequal, with a very small number of players who get paid orders of magnitude more than others. When you have transfer contracts which now amount to one hundred million dollarpounds in some cases, that can only be supported by a set of customers who extend way beyond national borders. The women's game though, doesn't have that same international pull from customers... yet.

There could be a very excellent argument to be made that national associations and indeed FIFA itself, has a moral duty to subsidise the women's game with the revenues from the men's game, until there is equality in the amount of money that sponsorship and broadcasting rights flowing in. That revenue from sponsorship and broadcasting rights, is however, still determined on what the customers are prepared to pay; which ironically isn't the fans for the most part but corporations who want to pay for advertising and television companies who want to buy the footage so that they can then sell more advertising space. To some degree, this is the snake that feeds itself.

This edition of the Women's World Cup has probably collected more in revenue than any other but even so, the prize money awarded to the entire US Women's National Team is still only $4m. The US football association has announced that the 23 players in the squad will get $250,000 for their efforts, which might sound like a lot to us mere mortals but all tallied, that's $5.75m which is more than what FIFA is paying and which means that this is a loss making venture for the association that just won the World Cup; and annualised over four years (which is the duration between World Cups) that payment is $62,500 which I guess is a decent wage but only for the champions and which would only happen once or twice in a player's lifetime.
If you compare that to the men's game where you can easily have players in Europe on that kind of money per week, then even blaming this on simple economics starts to look oh so churlish. It looks downright cruel that the prize money for this Women's World Cup is a pathetic 7.5% of what was on offer at last year's men's World Cup. I think that FIFA president, Gianni Infantino, deserved to look embarassed on the stage during the awards ceremony. Megan Rappinoe opened up a can of sensibility by saying:
"Everyone is ready for this conversation to move to the next step. We're done with 'Are we worth it? Should we have equal pay?' Everyone is done with that. Fans are done with that. Players are done with that. In a lot of ways sponsors are done with that. Every player at this World Cup, we put on the most incredible show that you could ever ask for. We couldn't do anything more. Let's get to the next point."

However, I think that it is unreasonable to assume that FIFA is going to do anything to remotely address the issue of inequality between the sexes in terms of pay because FIFA is a corrupt onion of an organisation with many layers of onioniness all the way to the core. If that be true, then we need to press Football Australia to be less oniony; especially if it wants us to support the bid for the 2023 Women's World Cup. The Equal Pay Act was passed in 1970; we need o see Football Australia make good on doing its bit, for the good of the game.

¹Statistically the US Women's Team has also thumped the US Men's Team when it comes to results; having won the World Cup four times and never doing worse than 3rd in all editions of the tournament, while the men have only managed a single 3rd place as their best result.
²Sherwin Rosen wrote about this in an article in 1980 called “The economics of superstars”. Watching sport, the movies, or music, involves something called “joint consumption” where a tiny number of sellers can in theory service the entire market. To wit, the Scottish Premier League is worth £160m where as the English Premier League is worth £3066m for next season. Taylor Swift is worth cart loads, while most bands would struggle to fill up a pint glass of cash on a weekend.
Posted by Rollo at 07:17

Is your Binance account locked? Tried every possible solution but still unable to unlock Binance account? If yes, it’s time to switch to the customer care professionals who can take you out from such errors in an accessible manner. The support experts team are trained and know the accurate solution related to your error. To get in touch with the Binance experts team, you have to dial Binance phone number or drop your queries via an email or chat box.The professionals are always there at your service.