This post is like Araldite Epoxy Resin, in that it comes in several parts and has gone increasingly messier as time has gone on:

Part 1 - GET IN THE BIN, SYDNEY MORNING HERALD.

Celebrity chef George Calombaris has been slapped with a substantial fine after admitting to underpaying $7.83 million in wages to 515 current and former employees of his hospitality empire as part of an unprecedented deal with the Fair Work Ombudsman.
The Masterchef star has been ordered to make a $200,000 "contrition payment" and must also make a series of public statements to promote compliance with the Fair Work Act, according to an enforceable undertaking announced on Thursday morning.
The full extent of the underpayment scandal has dwarfed initial estimates by Calombaris from April 2017, when his company Made Establishment announced that 162 workers had been underpaid $2.6 million because of "historically poor processes".
- Sydney Morning Herald, 18th Jul 2019

This is not an "underpayment" scandal.

Back in the olden days, instead of a four syllable gilded word, we used to have an honest ten-cent word for this - Theft.

This isn't "underpayment" but straight up wage theft by a person who the media (in this case Channel 10) has chosen to reward by giving them extra fame and glory, on the television show MasterChef.

It seems that if you happen to be in the public eye and famous, the normal rules of life don't apply to you. If you were to go to Mr Calombaris' restaurant and 'underpay' to bill, then more than likely you would find yourself in court, with him trying to claim back a few hundred dollars. If you were to decide that you wanted to leave without paying, then you would find yourself in prison for stealing. However, if you are George Calombaris, then it isn't wage theft but an 'underpayment'. Also, if this is an accounting error as was claimed, then why was it systemic, and part of a slew of underpayments right across the hospitality and retail sectors. Why have we never heard of an accounting error which caused an overpayment?

Well actually we have. An overpayment might have been made by the Federal Government; in which case you will have incurred what is affectionately known as a Robodebt. If I understand this correctly, if you have a Robodebt from ten years ago the government will hound you to suicide but if you are a celebrity like Master Chef George Calombaris who has stolen and the wages of his employees its just an accounting error?

Have I understood this properly?

You can't claim that this is a series of accounting errors due to "historically poor processes" when your own article then goes on to state:

This isn't an underpayment scandal but straight up theft.

I will openly admit that journalism is expensive and that the proprietors of a newspaper have the right to free speech, political expression and persuasion, and editorial licence, as much as any other individual or organisation, but it really grates with me when a media organisation openly protects the powerful.
There's just something sinister going on when a newspaper is prepared to demonise those people who can not defend themselves in the court of public opinion but at the same time will excuse actively bad behaviour by wrapping it in passive verb clauses. An
underpayment of $7.83 million in wages not only isn't an accident but the court has now proven same.

Furthermore, the archives of the Sydney Morning Herald prove that this was a very deliberate course of action on the part of George Calombaris.

Part 2 - GET IN THE BIN, GEORGE CALOMBARIS.

https://www.smh.com.au/national/masterchef-slams-fair-work-pay-rates-20120109-1pri2.html
Calombaris, who stars in the high-rating MasterChef TV show, has complained about the rates he will have to pay staff at his new Melbourne pasta bar, due to open this month, claiming it's up to $40 an hour per worker on Sundays.

"The problem is that wages on public holidays and weekend greatly exceed the opportunity for profit.
"It's really difficult to stay open and we only do it because of tourism but the reality is it's uneconomical.
"So our labour laws are something that need to be looked at and we keep talking about it."

The cost of eating out in Australia was expensive because of the workplace relations regime, Calombaris said.
- Sydney Morning Herald, 9th Jan 2012

You do not "only do it because of tourism". You go into business to do business and the reason why business does business is to return a benefit to the owners of that business in terms of profits and dividends.

Back in the olden days, we used to have an honest ten-cent word for this - Lying.

I have no doubt that when former Prime Minister, Tony Abbott, complained about not being able to get dinner at a hotel at 10:17pm on a Sunday night, George Calombaris was rubbing his hands in glee at the prospect of paying his staff less because their penalty rates might be taken away.

I bet that as a celebrity with a disordinant amount of influence, if he put a submission to the Productivity Commission, that they would have listened to his voice more than someone who would have to accept the newly made worse conditions as a price taker, and who would find it harder to put food on their own table.
By the fruits of their worse paid labour you shall know them and it should surprise nobody that after the fruits of their worse paid labour, George Calombaris pocketed the difference and then some.

https://www.theaustralian.com.au/nation/politics/penalty-rate-cut-failed-to-create-one-new-job/news-story/4946a1915162c197a896063ae4009bb7
Cuts to Sunday penalty rates had not created one new job or prompted business to give any extra hours to workers, admits the small business lobby, which has declared the heated political debate over the reduction in workers' pay to be a "waste of time".
...
Council of Small Business Australia chief executive Peter Strong said the net impact of the phased-in cuts by the Fair Work Commission had been minimal because they had coincided with above-inflation increases in the minimum wage. "There's no extra jobs on a Sunday," he said. "There's been no extra hours. Certainly, I don't know anyone (who gave workers extra hours). It's been just a waste of time."
- The Australian, 26th Apr 2019.

Just for reference, the national minimum wage went up 2.25% as opposed to the annualised inflation rate of 1.90%; which is a net 0.35% or 6 cents an hour. Forgive me if I think that Council of Small Business Australia chief executive Peter Strong has taken Michael Bliss on a sightseeing tour. Cutting penalty rates and then blaming a 6 cent increase in real terms for not hiring people; which is the reason why you put that forward, is knavish.
George Calombaris went one further and actually stole wages as well; which surely must make him the knave of tarts.

It gets worse dear reader.

Part 3 - GET IN THE BIN SOME MORE, SYDNEY MORNING HERALD.

The Saturday after George Calombaris have been proven by the Fair Work Commission to be a knavish knave, the Sydney Morning Herald and The Age Published this in the Good Weekend magazine: 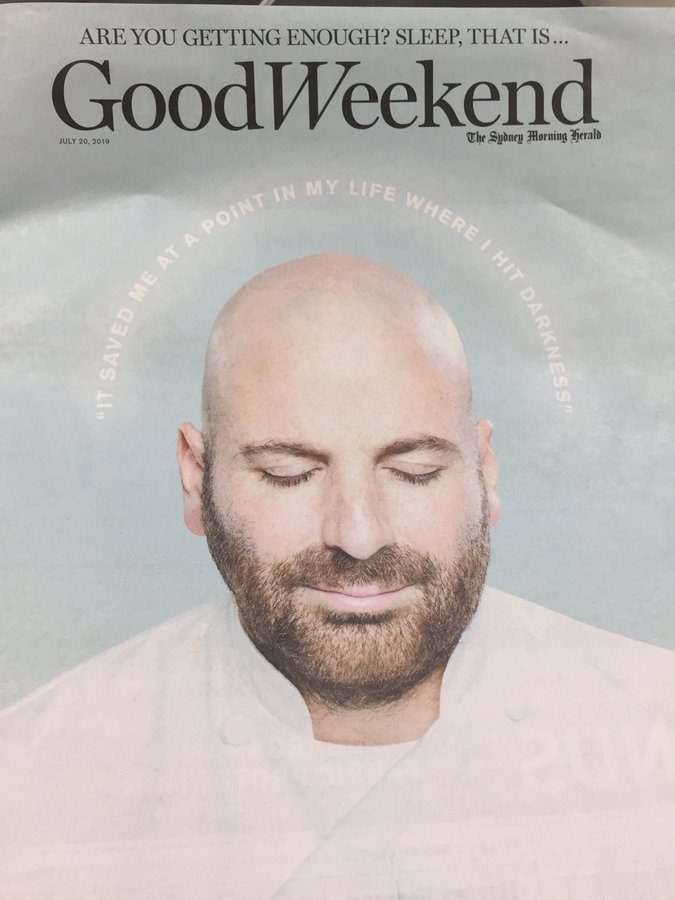 The Sydney Morning Herald and The Age put out the utterly feeble excuse that this had been sent to the printers on the Wednesday; before the decision was handed down by the Fair Work Commission, that Mr Calombaris was as guilty as the day is long of wage theft of $7.83 million from his staff.

The problem with this is that sitting dates, call overs, and the calendar for directions hearings are published in advance and are a matter of public record. It shouldn't be that hard for a news organisation which publishes the de facto newspapers of record, to send someone to the court to have a look at the roster; especially considering that the same news organisation published stories about the impending decision earlier in the week.
That says to me that an editorial decision was made, to ride the coat tails of publicity which would flow as a result of the MasterChef Finalé on Network Ten, and that they wanted to sell advertising space. This was a dispassionate and amoral decision, which is completely normal for how business normally operates.

Back in the day when the Sydney Morning Herald and The Age were owned by Fairfax, this sort of thing probably did happen but I would hope that the newspapers at the time had more editorial control about the decision to go to publication. It probably would have made more sense to just pulp the magazine and accept the fluff; and then write a piece for the following week which at least explains the mens conscia recti of the thing. Showing that the newspaper is editorially aware, is a far more noble course of action than this pile of claptrap.

https://www.news.com.au/entertainment/tv/reality-tv/all-three-masterchef-judges-axed/news-story/d59fd5e1af2c7d5bc1473f6aa4f5541f
Network 10 has pulled the plug on Matt Preston, Gary Mehigan and George Calombaris, confirming the trio will not return to MasterChef next year.
Chief executive officer Paul Anderson said: "Despite months of negotiation, 10 has not been able to reach a commercial agreement that was satisfactory to Matt, Gary and George."
- Daily Telegraph, 23rd Jul 2019

I would like to say that this is the best outcome for all concerned except that this does nothing for the people who have been working in George Calombaris' establishments and haven't been paid properly. They will still have to mount a legal challenge to recover what should have been legally theirs in the first place.
Channel 10 for its part has either responded to this because it suddenly found a conscience or because it found that the future reputation of the television show would be ruinous.

I note that the protagonist in the negotiations for more money here wasn't Messes Preston or Mehigan but our principal knave of this story, George Calombaris. He shows an incredible sense of fridge blindness to want to ask for more money and kick up a limburger stink about it, while at the same time denying his own employees their dues. I'd like to say that Mr Calombaris was given his just desserts here but he's skipped away without paying - which should be called Theft but is given a euphemism for no reason I can think of.
Posted by Rollo at 07:17

I enjoyed reading your article. Please make more interesting topics like this on.
I'll come back for more :)

From Japs a researcher from AOC, a company whois into ecommerce website design Sydney