On the 15th of April 1989, almost 25 years ago, 96 fans lost their lives as a result of a crowd crush at Hillsborough Stadium in Sheffield, during an FA Cup Semi-Final between Liverpool and Nottingham Forest.
Not surprisingly as fans required medical attention and the barriers were opened up to allowed the crush to fill onto the pitch, the match was abandoned after 6 minutes.

Not even the BBC's Match of The Day coverage really knew how to handle what unfolded in front of them:
https://www.youtube.com/watch?v=ypE5TG2UPNk

The football significance of 15 April 1989 is nil.
The game lasted less than ten minutes before being abandoned. As Liverpool boss Kenny Dalglish was later to remark: 'Football is irrelevant now'.
- The FA Cup: The Complete Story, Guy Lloyd & Nick Holt (2005)

The story of the Hillsborough Stadium disaster is complex and nuanced, with the families of the bereaved still demanding justice some 25 years later, the press (particularly The Sun) openly attacking and blaming fans for the event and the later report by Lord Justice Taylor would eventually lead to sweeping changes which would both provide massive increases in safety and ultimately in consequence, drive out a lot of the sorts of people who used to attend matches through equally massive ticket increases.

That report can be found here:
http://www.southyorks.police.uk/sites/default/files/hillsborough%20stadium%20disaster%20final%20report.pdf

I have heard calls in the past that April 15th has become lionised and that other disasters such as the Bradford Stadium Fire in 1985 or the Heysel Stadium disaster 18 days later aren't given due attention and to some degree that is true; yet it overlooks one very important and vital clue.
What happened at Hillsborough Stadium could happened anywhere.

Norwich City's ground, fifty-eight years old, is the youngest in the First Division.
...
How could anyone hoped to get away with it? With sixty-thousand plus crowds, all you can do is shut the gates, tell everyone to squash up, and then pray, very hard.
The Ibrox disaster in 1971 was an awful warning that wasn't heeded: there were specific causes for it but ultimately what was responsible was the way we watch football, among crowds that are way too big, in grounds that are way too old.
- Fever Pitch, Nick Hornby (1992)

Actually in 1989 apart from Old Trafford which had had various improvements more or less continuously from 1966 onwards, all grounds had stadia which were pre-war in construction. Even Wembley Stadium which was the home of the FA Cup Final, was at that time 66 years old.

Hillsborough itself was a disaster at least 20 years in the making. As Nick Hornby suggested, improvements in Occupational Health and Safety were desperately needed.
The disaster was set against a backdrop of massive unemployment, factory and manufacturing closures, a climate which as a result of the "sus laws" saw racial profiling (particularly of black people) which resulted in riots in Bristol, Toxteth, Handsworth and Chapelton earlier in the decade and rather than treat football fans like the paying customers that they were, the solution handed down by the rather doublespeak name the Committee of Inquiry into Crowd Safety at Sports Grounds or the the Popplewell inquiry in 1985 was to fence in and pen fans like cattle.

To be honest, I really don't see why there needed to be that much of an inquiry when it should have been pretty obvious. To keep fans behind fencing as seen above, would have resulted in a crowd crush somewhere, some time. As early as the Victoria Hall disaster in 1883, regulations required that all public entertainment venues to be equipped with doors that open outwards; so it isn't like the problem hadn't previously been noticed.

It is known now that there was a cover up by South Yorkshire Police but what I find really strange is that the Thatcher government, never really bothered to question the evidence. Even after touring Hillsborough Stadium in 1989, did the then Prime Minister even accept that maybe the design or complete lack thereof of stadia may have been a contributing factor 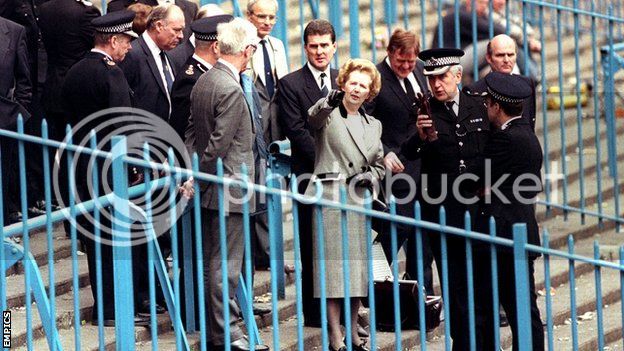 http://www.mirror.co.uk/news/uk-news/alan-davies-sparks-fury-with-foul-mouthed-785263#ixzz2ydfpgTZU
“Liverpool and the 15th... What are you talking about, 'We won't play on the day'. Why can't they?"
My mum died on August 22 but I don’t stay in all day. It’s a significant day in my life but if Arsenal are playing at home I’m happy about it.
Do they play on the date of the Heysel Stadium disaster? How many dates do they not play on?
Do Man United play on the date of Munich? Do Rangers play on the date when all their fans died in that disaster whatever year that was - 1971?”
- Alan Davies, as quoted in The Daily Mirror, 9th Apr 2012

Actually I think that this is a worthwhile question despite everything else wrapped up in it.Why botherto make 15th April a day worth remembering over 11th May (Bradford), 29th May (Heysel), 2nd Jan (Ibrox)?
It's worth considering that in 2014, we remember the 100th anniversary of Archduke Franz Ferdinand of the Austro-Hungarian Empire, being assassinated. The day of remembrance which followed as a result of 4 years of carnage was the result of a small piece of paper being signed in a railway car in Compiègne on the 11th of November 1918.
Admittedly, 15th April carries far far less importance than 11th November but the point remains that 11th of November is the memorial day appointed in many countries to remember the fallen of all conflicts.

I find it strange that the idea of a duty of care, which had long been established in English common law, wasn't seen to apply when it came to football stadia. Hillsborough was the visible tip of the iceberg, statistics aren't usually even reported until there's anything of significance. It was significant that at the same ground just 8 years previous, 38 people were injured in another crowd surge (although no-one was killed).
If the events at Hillsborough Stadium could have happened at literally any stadium in the country at the time, then it seems fitting to me that all matches should begin 7 mins later than usual. The people who stand in relatively safe conditions, with numbered individual seats (including Alan Davies at The Emirates) only do so because it took Hillsborough for the authorities to finally act and do something for the fans who turn up and pay to see matches.
It still does very little for the families of the 96 people who went to a football match on April 15 1989 and never came home.