Horse 1655 - Australia: Not The Clever Country

http://www.smh.com.au/comment/time-to-put-the-atar-to-the-test-20140413-zqu8a.html
But perhaps the greatest issue of concern is that ATARs are assigned to courses which do not necessarily reflect the intellectual capacity needed to complete the course. Rather, they simply reflect a supply-and-demand equation that balances the popularity of that degree with the number of places available. The ATAR becomes a virtual ''price'' or ''status ranking'' for the course. Hence the absurd refrain heard regularly amongst HSC students: ''I really want to do med. If I miss that, I'll do law ... or I could always be a vet.'' Three degrees with virtually nothing in common eyed off simply because of their comparative ATARs.
...
Don't get me wrong, some of my best friends are lawyers. But I can't help thinking how many potentially great scientists, academics and school teachers are lost to law’s siren song every year.
- Adam Spencer, Sydney Morning Herald, 14th Apr 2014


A man much wiser than me once said that where your treasure is, there your heart will be also. To be fair this is as equally true for individuals as it is companies and firms as it is for governments. If you want to find out what is important to someone, simply just look at their pocketbook, and follow where the money goes. Equally true is that through the corrective lens of history, we usually have 20/20 vision when it comes to looking at such things.

If we were to step back in history, perhaps a  particular statement made by a Prime Minister might hold out a promise, upon which we can measure where out heart as a nation lies:

No longer content to be just the lucky country, Australia must become the clever country.
To realise that vision I am announcing bold new initiatives today to build on our substantial achievements in education and scientific research – to unleash the skills and talents of our people.
- Prime Minister Bob Hawke, 8th Mar 1990

There is a useful term in economics called the "opportunity cost"; that is, the cost of value forgone in order to decide upon a different set of choices. The opportunity cost of building a car park, might be the loss of that same land to put in a public park or sporting field.

In 1992, the Keating government introduced a compulsory superannuation scheme. The rules governing this scheme have varied somewhat in 22 years in general, superannuation in particular has changed the way markedly that Australia goes about investment.
The rules which govern superannuation in conjunction with rules which relate to things like negative gearing in property and capital gains etc. have meant that more money is being invested in the property market; this in turn has caused something of a 100 year spike in the growth of property prices, which acts as a feedback loop, making property more attractive to invest in.

The thing is though that capital, like water or electricity, tends to follow the path of least resistance. When you force people to be responsible for their own superannuation to such a degree it also means that people are equally as likely to invest in those places which gain the highest returns; especially over the past decade, those returns can be found in the mining sector and in property/financial management.

This is the result since 1992 of where the economic choices and relative opportunity costs forgone have taken us. Personally I think that it's pretty sad that Australia in the 21st Century; 24 years since we were promised by a Prime Minister that policy would to build on our substantial achievements in education and scientific research – to unleash the skills and talents of our people, that Australia has in essence become a nation of number farmers and dirt farmers.
24 years of government and business policy have take us here. It was deliberate and forceful. It is somewhat of a myth to assume that economies simply organise themselves spontaneously. Such a statement would be like saying that it would be obvious to put fire escapes on buildings; the truth is that unless government policy forces something, business couldn't give an insect's iota.

Insect repellent, permanent pleat for fabrics, the microwave landing system for aircraft, Wi-Fi wireless local area network, were all developed by the CSIRO and yet we've heard only this week that it is heading for a funding cut something in the order of $150m. What sort of madness is this?

If governments actually cared about the promise of becoming the clever country, then policy would have been formulated. Increased subsidy for research and development, increased funding in education right across the board from kindergarten to university. I would hope that an investment in the labour stock of the nation would lead to higher rates of productivity and innovation.

But no. We can't become the clever country because an investment in education is like playing the long game. To take a child from kindergarten to university might take as long as 18 years and in that time frame, there'd already have been 6 Federal Elections. Politicians would have moved on, CEOs of corporations would have already gouged out their cut from the ASX 200 and would be living nicely upon the work which other people produced for them.
Heck Australia is so incredibly punch itself in the face stupid, that it can't even make steel for export anymore. BlueScope Steel exited the export market in 2011. Meanwhile BHP Billiton which is the world's third-largest company measured by market capitalization, exports dirt to be made into steel, which is then sold back to Australians as useful products.
How clever is that?

Adam Spencer couldn't help thinking how many potentially great scientists, academics and school teachers are lost to law’s siren song every year but I can't help thinking that their choice is completely rational. What's the point in even bothering with science, if the country has spent the past quarter of a century deliberately arranging the economy to become dirt farmers and number farmers? Why bother in doing science when to do something like buy a Ford Focus just requires the export of a mere 213 tonnes of dirt?
Thankfully with the current government going around signing all these lovely free trade agreements, the nations that turn magically turn our dirt into computers, refrigerators and the like, will simply be able to buy up all our dirt farms for themselves. Heck even they don't that Australia isn't the clever country. Queensland even poked fun at itself with its "The Smart State" number plates. 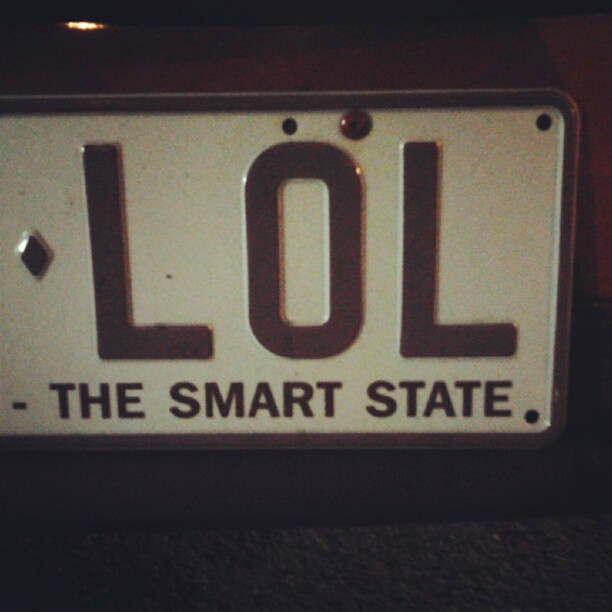 Possibly thousands of potentially great scientists, academics and school teachers are lost to law, economics and finance every year, not necessarily because of the number of places available but because of the potential rewards that are available at the end. If you're paying tens of thousands a year for a university education, it is rational to do something which will reward you; and in Australia, we've spent 24 years designing an economy based on dirt farming and number farming because it's simply just too hard to...
... become the clever country.
Posted by Rollo at 22:57

Thanks for every other informative website. Where else could I am getting that type of information written in such an ideal method? I have a undertaking that I’m simply now running on, and I have been on the look out for such information.

Outstanding as well as powerful suggestion by the writer of this blog site are truly valuable to me. Early Access To Your Superannuation