Sydney City Council has commissioned two pieces of public artwork in conjunction with the NSW Government's $220 million light rail project. There has been a whole host of opinion from outrage to confusion to ridicule on these two proposed pieces and in this post I offer my two penneth worth.

I think that a major problem with public art in modern times is both that the artists who produce it and the general public who for want of a better word 'consume' it, is that the once assumed bulk of mythology which people had, no longer exists.
For instance, the J. F. Archibald Memorial Fountain in Hyde Park has the Greek god Apollo who represents the Arts (Beauty and Light), whilst Diana, goddess of purity, of peaceful nights and charity, and Theseus and the Minotaur is in another of the sections of the fountain. These things may have meant something to people even 80 years ago, would they still have the same cultural relevance today?
Even in an era where we're going about mythologising the First World War and especially Gallipoli (you can expect to hear a lot about that over the next year and a bit), there aren't a lot of people who know many of the names of the soldiers who fought in that war.
In comparison, when Britain was setting about mythologising its history, it erected statues to people like Lord Horatio Nelson, Henry Havelock and Charles James Napier.

Some student is missing a coffee table

Almost everyone who I've spoken to about this, hates this giant blue milk crate as an idea for a piece of public art; I on the other hand love it.
This unlike the Sydney Opera House, which fails to live up to its title in that it is impossible to actually hold an opera in the Sydney Opera House, does live up to its title "Pavilion" in that it will be a pavilion.

Australia has loads of big things. There is a Big Banana, a Big Prawn, a Big Pineapple, a Big Guitar, a Big Merino, a Big Axe, a Big Miner's Lamp, a Big Mango, a Big Sausage King, a Big Tap... Wake up an smell the big cup of coffee. The Big Milk Crate is about as Australian as you can get. Yes it's a Big Blue Milk Crate but... it's a BIG BLUE MILK CRATE. What's so hard to understand?

The thing I really love about this is that it's obviously just so pointless. All big things are inherently pointless. Isn't that kid of what we like about them? This goes to the whole other end of the spectrum. This isn't like the giant paper clip thing where we're all scratching our collective noggins, wondering what in blue blazes is going on, this is a big blue milk crate; we know exactly what it is.
"I'll meet you at the milk crate" would be as ubiquitous as the UK city of Liverpool's "Meet under a statue exceedingly bare". There's no symbolism here. It just is.

All of this brings me squarely to the question of "what is public art for?" and let me tell you, I am totally unqualified to answer that.
As someone who lives in a predominantly urban environment, I get to walk around and see statues of people and things in public spaces and assume that most of the time that they are in commemoration of history. Some pieces of public art completely baffle me though. There is a sculpture at Allan Border Oval in Mosman, which looks kind of like a tree bit is made up of silhouettes of magpies. I can attest, after having six stitches over the years from magpie strike that there are in fact magpies that live in that park, but it is beyond me as to why there should be a piece of public art in dedication of them.
At Federation Square in Melbourne, the public "art" which is officially called "Nearamnew" is supposed to invoke images of the outback but anyone who has tried to get across its undulating cobble stones in a hurry, just thinks that it is a public hazard.
On the other hand there is a sculpture in Sydney called "The Bounds of Friendship" which is basically two interlocking rings and is supposed to mark the voyage of the First Fleet from Southampton to Sydney. What I like about this is that there is an identical set in Southampton.
The symbolism is pretty obvious once you read the plaque and from an aesthetic point of view, it is what it's supposed to be. Again, it probably isn't pretty but it makes sense. Inherently, it's no worse than a giant paper clip thing. 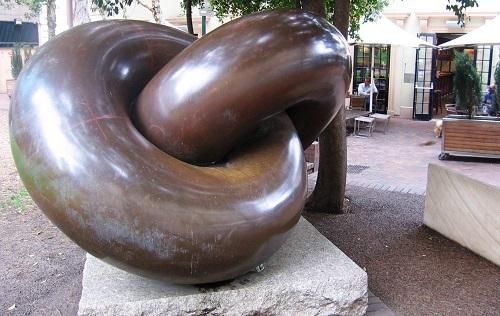 If it were up to me, I'd like to see someone invent a new set of symbolism which would personify Sydney (see Horse 1695) but I suspect that that is all a bit too hard. I guess I'll begrudgingly have to accept that what we get for public art is either a statue of some public figure, weird shapes which are supposed to symbolise an abstract concept (and do it badly), or a big thing.

Maybe we should just have a 400 foot tall statue of Tim Cahill, with one hand shading his eyes and the other pointing out into the distance. As the dawn rises over the city, Big Tim Cahill would symbolise...
okay I've got nothing.
Posted by Rollo at 07:27