Sometimes Sydney has weather which would belong equally well in places like Berlin or Moscow or even Tokyo. Although Sydneysiders like to rag on Melbournians because they live in the "rainy city", the unbelievable truth is that Sydney gets more rain in a year; it's just that unlike Melbourne's drizzle, in Sydney, it just chucks it down.
Last night was one of those evenings and as I stepped off the train at Marayong, I realised that I'd left my brolly on the train. As I got back on to get it, the doors closed and I went to Quakers Hill... this is that story.

Previously, I had been to Quakers Hill Station in the early morning on several occasions if I'd wanted to get a seat by taking a train back one station but I'd never got off there at night; the whole experience is totally different.
There is a strange sort of beauty about the world underneath the cover of night. With the rain and mist blanketing everything and closing down distance of vision to only a few hundred yards, it means that the ability for street lamps to scrape away the darkness is severely limited; to the point that the street lights do not appear as they usually do but as spheres of light suspended in space; hanging on nothing.

The problem with sodium lighting is that the light which is produced is all uncannily one colour (that yellow is 589 nanometres in wavelength if you we're interested, which you're not) and it bathes the world in a horrble jaundiced light, as though someone had washed the world in nicotine stains. Nowt looks healthy at all.
In stark contrast, the pale blue lights of the railway station's fluorescent tubes, which flicker according some hither to undiscernible pattern, paint the immediate area in a pale blue; though they do not really do a better job at holding back the darkness; only their immediate domain receives their indigo hue. Unlike the sickly tones of the street lamps, they paint their domain with all the charm of a hospital corridor. This is made ever more the worse when you consider the hard shapes of the railway station; the cool, aloof tones of the tile work, the concrete form work and the unforgiving metal structures.
It is all incredibly deceptive. The colour temperature tricks you into believing that the place is sterile but even a customary glance reveals that dust, grime and other filth has invaded every surface and not even Ajax, the champion of all grease, would halt this opponent if his hand were tilted at it.

The rain lazily didn't bother to go around me either; it decided to cut straight through, with ten thousand tiny daggers. I took refuge in an elevator which helpfully wasn't perfumed by either of those two companions, Eau de Uriné or Vasser Von Viktoria (Bitte!)
As the doors closed, the silence was surreal. I imagine that if anyone was watching surveillance screens wiuld have been confused at the fact that I was just standing there but Big Brother I imagine, had gone home. After three minutes of silence (yes, I was watching the station clocks tick by), the lift moved upwards but when I got to the concourse level, there was no sign of love behind the doors; called by no-one.

As I stepped out of the lift and into the concourse, I saw four Opal Card posts, standing as though they were they posts for an unmanned border. I was reminded of  Checkpoint Charlie in Berlin and the starkness of the architecture of the station, whilst it strictly wasn't of the Brutalist style (as per Le Corbusier or Ernő Goldfinger) it was still pretty brutal and reminded me of the sort of thing you find in East Berlin. 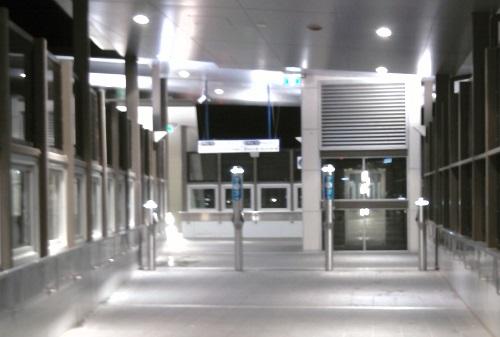 Just like the abandoned border posts of East Germany, Sydney Trains has undertaken an equally comprehensive policy of systematically abandoning its ticket offices. Where once were stationmasters in uniforms with shiny buttons, hiding behind steel grilles, they have been largely replaced by these sleek, shiny poles. The real irony that the only splash of colour to be found is the Opal Card logo.

The actual distance between Marayong and Quakers Hill is only about three kilometres but last night in the wind and the rain, it felt as though I was in the transit area of some foreign airport. For fourteen minutes, I kind of felt as though was in a foreign country: they do things differently there.
Sometimes there is a strange beauty in starkness.
Posted by Rollo at 09:48