A task which is supposedly impossible is to put a cat into a box. I can tell you from experience that it is an exceptionally easy task - simply open the box. Likewise the equally mythical job of herding cats is also supposed to be difficult when in reality all it requires you to do is walk slowly behind them. What in actual fact is a difficult task is to get a cat to come to you if it doesn't want to. I have spent many an evening with the back door open, waiting for the cats to come in. Forget cows, at least waiting for the cows to come home has a semi predictable time frame - cats operate on their own internal logic; which as far as I can tell is more unknowable than the dynamics of an electron and even Heisenberg described those things with an uncertainty principle.

The other common household pet, dogs, have had many stories written about them. There are cases of dogs displaying loyalty and commitment to their owners even after they have died. Dogs are social and hierarchical beings, they want to know their place in the pack and will gladly accept it. Cats on the other hand already know their place in the pack, they are the rulers of their domain and they treat all attempts to change the status quo with quietly confident ridicule.
The best example that I can think of that displays this fierce confidence is the story of Matthew Flinders' cat Trim, who travelled with him extensively on board ship. Flinders' diary records that on a trip around Van Diemens' Land, in the middle of a howling gale, Trim was standing on the poop deck totally unconcerned about the tempest raging all around and the sound of him meowing for his dinner could be heard above the thunder and the shock of the lightning. In the midst of mortal peril, Trim knew that he owned both his servant Matthew Flinders and even the ship for that matter, and ruled his domain with an iron paw. Next to the State Library Of New South Wales, the statue of Matthew Flinders is overlooked by a statue of his master, Trim.

Give me my dinner. Now.

A dog can be trained and will learn something in the order of about a hundred different commands. As dogs view practically the entire of life as one giant game, this can be manipulated and this is why training a dog can be done reasonably well by those people who have that sort of skill. Cats on the other hand are far harder to train, largely because they have to choose to be, but in contrast cats can learn more than two hundred and fifty words. The words that my two cats have learned are almost entirely specifically related to their interests (about being fed, escaping the cold, going outside) because the the words that they have chosen to learn, they have done so on their terms and their terms only.

Likewise cats have their own vocabulary, which as far as well can tell is mainly about manipulating people into doing things for them and expressing things that are relevant to their interests. From the mouths of my two cats I have heard pleading, demanding, annoyance, pain, enquiry, domination of a space, affection, confusion and yelling simply because it's fun. I suspect the range of emotions that cats feel are more intense than people because they very much live in the moment but are far more short lived.
In my experience, they have a concept of the future but they only care about how it relates to them. Their internal clocks know when it is time to be fed and woe unto those who try and defy it. Their concept of the past is equally tied to the past. When Kipper demands his nightly milk, if he has already had some, his demand will change in tone from one of desperation to one of almost apology. I suspect that he hopes that we will not have noticed. 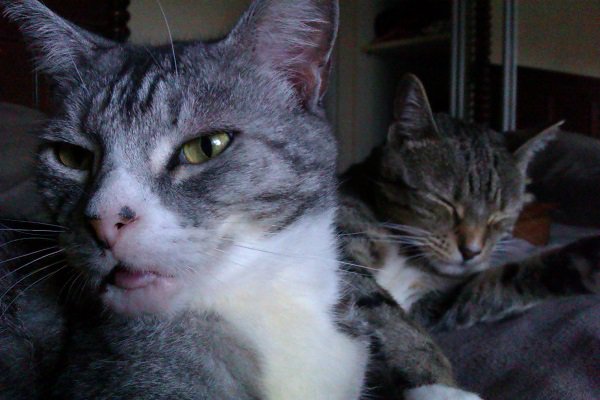 A dog is someone who will show you unquestioning, unending loyalty - a cat in contrast, who will leave you in the midst of a burning building; not because they don't love you but because they are too selfish to go and get you. They would rather curl up in front of the fire.
Although cats are often mistaken as being aloof, what they have in abundance is independence. Sometimes a cat will want something from you but they're equally fine with not being the centre of attention. If you leave a cat be, they're quite happy with doing their own thing. I've spent many a pleasant afternoon or evening with a cat close by and they have been in their own realm of joy, sometimes in a sunbeam.

I think it hardly surprising that people like Samuel Johnson, Winston Churchill, Isaac Newton and Charles Dickens all had cats. Cats are the best pet to have around if you are conducting the affairs of a nation, or investigating the boundaries of science and literature. However it was Ernest Hemmingway who perhaps said it best:

No animal has more liberty than the cat, but it buries the mess it makes. The cat is the best anarchist.
- Ernest Hemingway, For Whom the Bell Tolls, 1937
Posted by Rollo at 12:27