In 2016, The International Year Of The Howling Moron, we've seen Canada elect Pierre Trudeau in the most boring Canadian election in history, Australia return the Turnbull Government with a Senate which contains more wing nuts and loose bolts than any other Senate before it, the United Kingdom all madly run for the exit door of Europe as they voted to leave, and the continuing tempest of madness that is the United States Presidential Election. The scary prospect isn't so much who will win between Hillary Clinton and Donald Trump but the fact that as commander in chief come next January, that they will have their finger on the nuclear button.

In the interim we have a growing proportion of the public increasingly becoming concerned that whomever does get to sit in the Oval Office chair in 1600 Pennsylvania Avenue, will get to decide who the ninth Justice of the Supreme Court is; with the nomination, be able to tip the court out of its 4-4 Liberal/Conservative balance.
No less than President Barack Obama himself, has expressed disappointment and frustration with the idiotic partisanship which continues to turn what should be a functioning democracy into on giant gridlocked mess. 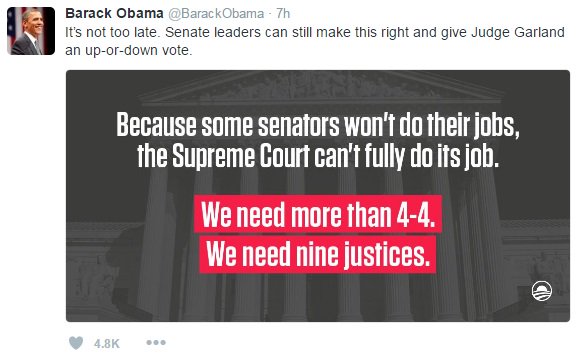 Historically the Supreme Court Of The United States went from being a forgotten little nerdy room in the basement and down a coal hole, to this weird behemoth of a thing which has the potential to make decisions which fundamentally change the nature of law in the United States. Cases such as Miranda and Roe, are often referred to as markers of the basis of rights, due to the fact that the Bill Of Rights has a very strong effect of blinkering people's vision of what their rights actually are; even though the Ninth Amendment states that the rights not specifically enumerated are retained by the people.
With the death of Justice Antonin Scalia, the court was split 4-4 along Liberal/Conservative lines (owing to the weird way that the political parties are aligned on an authoritarian/libertarian axis rather than an economic statist/laissez-faire axis) and the Republican party which controls the Senate refuses to give its "advice and consent" to anyone that President Obama might appoint; which is necessary under Article II, Section 2, Clause 2 of the Constitution.

Personally I think that this is yet another fundamental flaw with the whole three ring circus that is the US Government and one which people like Jefferson and Hamilton could have never have imagined let alone conceived of when they drew up the Constitution.
However, there is one minor little clause in there which I think if triggered would shut down this aspect of the grand shouting match; it is something which has been used in the past and would be one of the most hilarious and scandalous party pieces ever pulled off.

It is this:
https://www.law.cornell.edu/constitution/articleii
The President shall have power to fill up all vacancies that may happen during the recess of the Senate, by granting commissions which shall expire at the end of their next session.
- Article II, Section 2, Clause 3, US Constitution (1789)

In the olden days when travel was expensive and long, a recess of the Senate would have been harder to revoke. Once senators went on holiday and back home to their families in West Bananatown, East Dakota, they were harder to recall if something needed to be done. Elsewhere in the Constitution it is very clear that only the Congress has the power to enter Wars but this doesn't stop the President from using the military in short engagements. Likewise, this particular clause says that in the event of a recess of the Senate, the President has similar powers of appointment.
If I do a quick rundown of the numbers, if the Senate officially goes on recess on December 26, then there are just 30 days until the inauguration of the next president. In that period of time, this clause could be invoked and voilà, the court would again have 9 members as judges. Obama would transform from a lame duck president to a duck who has swallowed a proximity mine. It would end his Presidency with a bang and provided someone was chosen who was as close to apathetically brain dead neutral as he could find, then would go through relatively peacefully, whatever that might mean.

The sting in the tail of this metaphorical scorpion is that it might be decided by the next Senate that Obama's appointment was unconstitutional. If that be the case, then mounting a challenge would warrant going through precisely the same body which the appointment was made; which would put the court into a decision which would decide it's own fate. No sane set of judges, even ones with a fundamental split in ideology, would choose to depose themselves. Almost certainly the court would decide 5-4 in favour of the recess appointment and that would be the end of the story. There would be outrage, noise, confusion and invective spewed across television, radio and print media but eventually after the fourth estate has thrashed itself silly, it would quieten down.

In practice, in all likelihood and in the real world (and not the world of fantastic imagination as invented by some hack with a blog), the chances of this happening are exactly 0%. If someone like Eisenhower had been in charge, he would have had no fear in doing exactly as he pleased; in full knowledge that nobody would say anything. If it had been James K Polk, who got stuff done as president, had enough and went home and died afterwards, then he would have made his recess appointment and barbecued an ox on the White House lawn. President Obama though, has three things which count against him in this case: he is entirely sensible, reasonable and calm.
This leads me immediately to thinking about what a similar set of circumstances would look like in 2020 after President Trump's chaotic four years in office. He'd make a recess appointment as per the Constitution and the chance that the media would have had to object would immediately be outshone by the tremendous bonfire of yet another idiotic thing that he said.
Likewise if President Clinton was faced with a similar set of circumstances in 2020, precisely the same outcome would happy as is happening now. Congress would be equally as hostile and I don't think that Hillary would dare make a recess appointment because like Obama she is entirely too reasonable.
Posted by Rollo at 10:47