As much as I think that Knuckles the Echidna from the Sonic The Hedgehog video game series is cool, or that Millie who was one of the three mascots for the 2000 Summer Olympics in Sydney was equally as pointless as Syd and the other one who was so forgettable that I can't even be bothered to look up his name, I don't think that the cultural significance of the echinda is enough by itself to warrant retaining the five cent coin. 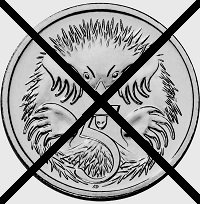 The five cent coin which was designed by Stuart Devlin and introduced in 1966, when Australia changed from pounds, shillings and pence (£.s.d), has in my not very well paid opinion outlived its usefulness. According the the Reserve Bank of Australia's Inflation Calculator¹, where you can puch in any amount going back to Decimal Day in 1966 (or back to Federation using the Pre-Decimal Inflation Calculator²), the buying power of five cents when it was introduced would now buy 63 cents worth of stuff now.

The problem is that, the five cent coin, on account of it being worth so little, mostly fails at its only function. The vending machines at train stations don't accept them and when people use them in the supermarket, I think that most of us resent the five cent coin's existence. I've found plenty of five cent coins left on the pavement because it simply wasn't worth people's time or effort to bother to pick them up.
That's worth considering, if it is literally not worth someone's effort to pick up a five cent coin, then that is a rational decision which has been made; this is an actual value judgement where the reward is exactly calculated. The service being exchanged is someone's time and effort for an exactly quantified amount of money and if people can't bothered to pick a five cent coin, then it should say something about the value of that unit of currency and whether or not it is worth making. If a two dollar coin was on the pavement, the reward for bothering to pick it up is forty times as much, even though the effort expended is exactly the same. In 2006, New Zealand reached the decision that its five cent coin was't worth keeping and got it of it as part of a currency revision.

I already think that the fifty, twenty, ten and five cent coins are too big for what they do. As it is, the five cent coin is based on the older £.s.d. sixpence which on that planchet size dates from 1816 when Mad King George III was still on the throne. Incidentally, the buying power of sixpence in 1816 would buy you not quite $130 worth of stuff now. Asking something to do a job for two hundred years is a bit of an ask.

Whilst I do think that the five dollar note should be replaced with a five dollar coin, simply because I find it easier to put coins through the checkout machines in supermarkets than having to fight with notes in the note acceptor, I think that the five cent coin has finally outlived its useful life. It's probably also worth adopting the same planchet sizes that New Zealand uses for its currency, or at very least using the ones for the ten, twenty and fifty cent coins.

If we do anything in 2017, let's get rid of the five cent coin. It's the change we can believe in because we don't believe that getting five cent coins in change is worth it - literally.