Ever since the end of the RX-8, you've been faffing about by presenting show cars and concepts at motor shows that will never ever see the light of day.
Mazda North America president Masahiro Moro, made remarks last year that the reason why the Mazdaspeed and MPS badges were removed was that the company didn't want to be seen as "childish". I suspect though, that the real reason why was because after the divorce with Ford, you lost access to the Ford and Volvo parts bin and with it, access to the bonkers mental fun stuff that produces the Focus RS, Fiesta ST and the Volvo T5 Polestar. This is despite the fact that in just about every Zoom Zoom magazine which you put out, you like to harken back to that one moment when the Mazda 787B became the only Japanese car to win the Le Mans 24 Hours. It was painted in one of the most delightfully ridiculous liveries to ever appear on a race car.

If I look around the car park in just about every shopping mall and supermarket in the land, all I see are acres and acres of silver and grey econoboxes. Hatchbacks are practical and for some hitherto unknown reason, people seem to think that SUVs are cool even though they are just jacked up station wagons. Very occasionally you will see the odd red or blue car out there because these people like a bit of fun but generally, the outlook is bleak and grey. Every motor manufacturer can build yet another boring machine but we get as much joy from them as we do from the washing machine, refrigerator or other household appliances. Is this why you don't want to be seen as "childish" because you like this world of grey?

Forget some notion about not wanting to appear childish because every motoring enthusiast in the world is really just a nine year old who happened to get taller. A motor vehicle after it is all said and done, is nothing more than a box on wheels which moves people and stuff around. Companies like Google know this and they're intent on taking away all of the fun in motoring by handing the job of driving over to computers and having cars move around autonomously. This is a future to which the nine year old child inside of me jumps up and down and stamps on the floor; yelling "no, no; no!" at.

With the exception of NSU, you Mazda are the only manufacturer to really bother with rotary engines. My little Mazda 2 kind of hints at this in its styling because it is obvious to anyone who knows, that the shape of that grille is based on the shape of the Flying Dorito at the heart of every rotary engine. You need to double down on that. Give us the wail of the Flying Dorito again and make us all jump up and down like the nine year old children that we still are. Put that rotary in a Mazda 2. 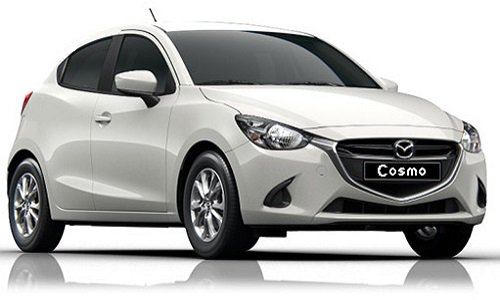 I think that the current DJ 2 is a better and funner car to drive than the ND Miata but I realise that I am in the minority. If you took the Mazda 2 sedan and turned that into a coupé by rescupltuing the roof line (and then turning it into a lift back), then you'd already have a wee little ripper that'd be more fun than ice cream on a bouncy castle. If you then put the Renesis 13B into that coupé, you'd then have the sort of bonkers mental fun stuff that you lost after the divorce with Ford. It would even be an appropriate machine upon which the Cosmo badge could be resurrected and applied to. You would have a small sports car, with the Flying Dorito under the hood, and all of us tall nine year old children would think it was Christmas morning again.

In the race to build supercars and hypercars, many manufacturers including you Mazda, appear to have forgotten that the reason why so many cars grew legends around them at all. Toyota tries to invoke memories with its 86GT but forgets that the original AE86 was a Corolla. BMW with its M division forgets that the M3 was once a nameplate on the littlest car that it made. Ford hasn't forgotten what it is and hence the reason why the Fiesta ST is still a reasonably accessible motor car. The RX-7 went from being a relatively cheap and fun car with the SA22, to being a thing which forgot what it was. The RX-8 which followed, was an entirely civilised machine; which was polished to the point of soullessness. Mazda, you are the company who dared to do the insane where nobody else would, for you to turn as grey as the rest of the cars in the parking lot is like watching the last of the flowers die at the end of the summer.

I know that other car makers want to build halo cars, such as Nissan's GTR, the truth is that you're more likely to build a legend if you make something which is accessible to the people. The Mini Cooper S, the Volkswagen Golf GTI and the Subaru Impress WRX, were all within reach of the masses. A rotary Mazda 2 coupé would be a thing which people didn't know that they wanted but I bet that if you built it, they would come; if only you would dare to be bonkers crazy mental again, Mazda.


PS: If you do build the new Cosmo, can I have one for coming up with the idea?
Posted by Rollo at 22:10