One of the things that I always notice, much to my Mrs Rollo's annoyance, is the number plates on cars and trucks on telly. I guess that one of the pitfalls about watching crime drama a lot is that you tend to scrutinise everything on the screen in case it's useful later on. This probably relates to the expectation that Chekhov’s Law is in operation - never put a gun on stage unless you intend to fire it. I'd go so far as to say that one of the games which you end up playing in a 'whodunnit' is trying to work out who done it. To that end, number plates on cars are helpful because sometimes you can work out where someone is, or who someone is.

Naturally this brings me to the most famous number plate in all of pop culture, which sits on the USS Enterprise - NCC1701. There have been various editions of this plate as additional suffixes on the end (think D in 'The Next Generation') but the first actually also follows normal and logical rules, which Mr Spock would be most pleased with.

N - although set sometime in the future and in a United Federation Of Planets, evidently that future still contains remnants of the current geopolitical system. The letter N as the opening letter on aircraft indicates that it is registered in the United States. Intriguingly, this also means that United States law also applies because the laws of the country of origin apply on-board ships and aircraft. It also means that if a baby were to be born on-board, that they would gain United States citizenship because they were born on US soil.

C - The second letter specifically denotes that this is a civil craft. This is interesting as throughout the television series and films, the Enterprise often fires cannon and torpedoes, though what those things mean when applied to space is anyone's guess.

C - In the twenty-first century, aircraft do not carry a third letter as an identifier with specific meaning. One can only assume that it must mean something in the future but I don't know what. I would hazard a guess that because the Enterprise is on a five year mission, of scientific discovery and splitting infinitives, that this letter is for that.

1701 - I have heard all sorts of explanations about this, from the number on the opposite side of the street from where Gene Roddenberry grew up as a kid, to someone's birthday, and as a nod to the production number. Whatever it is, isn't really important and so it could just be the next available number at the vehicle licencing office.

This line of enquiry led me to another nerdy thought. The format for the number plate of the USS Enterprise could have existed in the UK on a motor car.

NC - As a prefix opening code, this tells you that the car was first registered at a vehicle licencing centre in central Manchester.

C - This tells you that the car was registered in 1965; which itself is amusing because Star Trek came out in 1966, which means that there could have been a car wearing this number plate when the television show first aired.

1701 - UK number plates of the period are usually of the form XXX-YYYX where X is a letter and Y is a number. It isn't impossible though, for cars of the time to have four numbers instead of a terminal letter.

Taking this to its logical conclusion, if the number plate existed on a car in the UK, it would have been on a 1965 registered car and that could have very easily been on a Mark 1 Ford Cortina, which was the highest selling car in the UK in 1965. It's also amusing that the BBC television series Z-Cars is also contemporary to this and that invariably leads me to ponder the thought that if Star Trek had been made by the BBC, then it isn't beyond the realms of possibility that the HMS Enterprise could have had Captain James T Kirk played by none other than Brian Blessed. 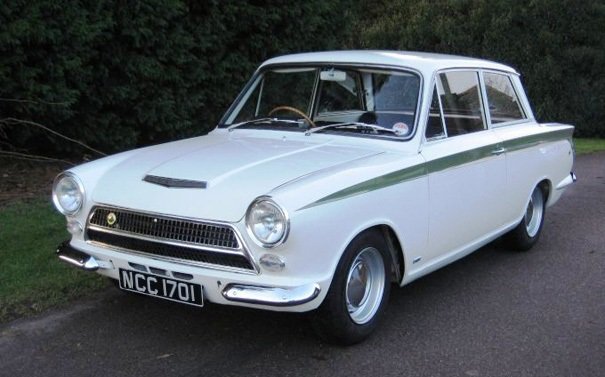 In space, nobody can hear you scream - except if it's THE LOUDEST MAN IN THE UNIVERSE.


CRY 'HAVOC' AND LET SLIP THE DOGS OF WAR.