Horse 2234 - Downgrading Holden From "In Trouble" To "Seriously In Trouble"

With the demand that came out of Detroit in 2013, after the then Treasurer Joe Hockey thundered and dared the motor manufacturers in  Australia to leave, Holden announced that the sword of Damocles was about to spike it through the head; and on October 31 this year, the last Commodore will roll off the assembly line and into automotive history.
Now that Holden has been condemned to swing in the breeze like a corpse in a noose, another announcement was made that could render the plans for the Commodore's replacement impossible.

As an importer, Holden will have no choice but to accept what General Motors decides to foist upon it. When it comes to making decisions about the future model line up, the CEO of Holden will be like a Muscovite in a supermarket in 1989: it will have a choice of whatever is on the shelf at the time and it will be wrong.

The announcement that General Motors is looking to off load Opel/Vauxhall, possibly to the Citröen-PSA group means that a lot of its choices will be immediately eliminated. I understand that if the sale does go through, that General Motors is demanding that the sale of Opel/Vauxhall to PSA Group includes a non-compete clause which would prevent PSA Group from selling Opel cars in North America, Russia and China. That probably would also include vehicles currently traded within General Motors and that seriously affects Holden because many of the cars in its line up are sourced from Opel. They would all need to go away.
The following graphic, which I've edited from Holden's website shows just how much trouble Holden is in: 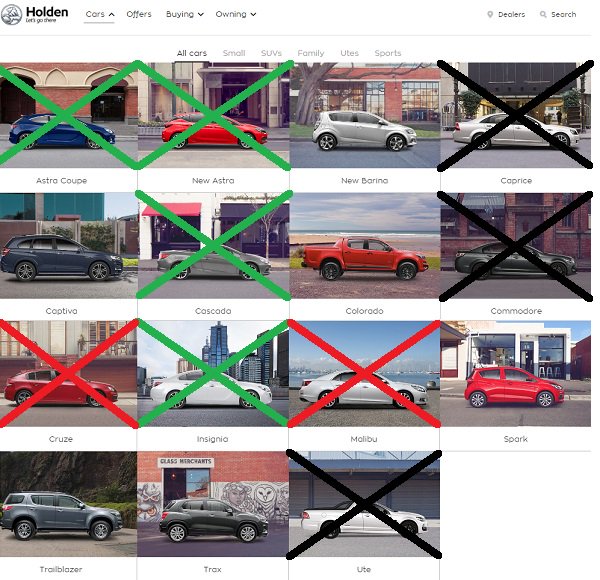 From http://www.holden.com.au - as at 27th Feb 2017.
Green = Opel cars which will not be available to Holden if sold to PSA Group
Red = No future RHD models exist. Malibu ends in Jun 2017. Cruze ends in Oct 2017.
Black = Discontinued. Production ends Oct 2017; along with the end of motor manufacturing in Australia.

Quite probably all of this could be wrong and part of the terms of sale would be that the PSA Group would have to honour existing delivery contracts but when they came up for renewal, I don't honestly see PSA wanting Opel/Vauxhall to compete with Renault/Peugeot/Citroen in Europe and they certainly wouldn't want the extra effort of converting cars to Right Hand Drive for export to a tiny market like Australia.

Exactly what Holden is supposed to do is totally beyond me. Without Opel/Vauxhalls, they effectively lose access to most of the Right Hand Drive cars that they could have sourced and if they are retained as a General Motors brand, they are basically the only market where largish cars are sold in Right Hand Drive. General Motors' efforts to sell cars in Japan have always been pathetic, they don't even offer large cars in India, which leaves Holden in Australia and New Zealand. In South Africa, Chevrolet's entire lineup already is only five cars; with the Cruze being discontinued later this year.
If 2018 is too soon, then in 2020, Holden has a serious existence problem, if it already hasn't fallen through the floor already.

Aside 1:
I know that this is the least important thing of this whole deal but I wonder what this means for the V8Supercars. Ford's Falcon is discontinued and competes in 2017 as a legacy model, Volvo and Mercedes-Benz have already withdrawn; Nissan would probably prefer to use its GTR; which leaves Holden who would have no big car in their lineup at all unless they import the Camaro.