Invariably there will be reports of these people camping out overnight for concert tickets that have gone on sale, or the Apple iSandwich with 128 bit pepperoni and pickle co-processing or in today's insane Sydney rental market, the chance to be put on the short list for a one bedroom apartment with no toilet and only one small window where the view is of the kitten strangling factory. I saw the darnedest thing this morning - people queued out the front of a Footlocker store for the chance to buy a pair of the latest Adidas Harden Vol.1 trainers. 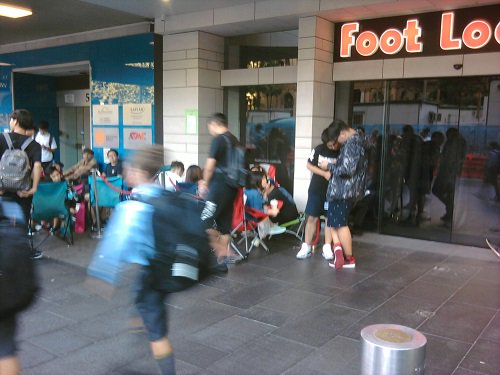 Footlocker went all out on this. The store front was blacked out and when I was passing by, there were some security guards handing out what appeared to be numbered tickets. The queue stretched right around the corner at Park St and almost to the next block. I have no idea how "limited" that this limited edition of these Adidas Harden Vol.1 trainers but if I was Adidas, I'd limit it to the number that you could sell before people lost interest.

This idea of waiting in a queue or camping out overnight isn't alien to me. I have stood in a queue overnight for tickets to centre court at Wimbledon. I have joined a queue at stupid o'clock in the morning for tickets to see Oasis. The idea that people will stand around in the cold, if it means that they will be the first to get the latest gizmo, or something of rarity that they'll be able to flog off on the secondary market, is totally understandable to me. Even if these people decide not to sell their brand new trainers to make a quick buck, then I get it. They want the satisfaction that they were first.

You see this same sort of mentality on YouTube all the time. When a video gets posted, quite often you'll see the word 'FIRST' in the comments section. Of itself, it adds nothing to the conversation but I think that there's a certain sort of innate joy that comes from doing a thing first. Dr Brady Haran of the Hello Internet podcast, Numberphile and Periodic Videos expressed this brilliantly when he spoke of being a kid and being the 'first to touch a tree' on New Year's Day (in 1984) but it isn't just the childlike joy of being first, people who are supposedly grown up do it too.
People speak of inventors who made the first telephone, transistor or television transmission. The lightbulb itself has become a metaphor for thinking up something for the first time. People remember who the first to visit the South Pole, Mt Everest or the Moon were. People remember where they were when someone did a thing first as well. It is almost as if that everyone is playing along by proxy.

For the vast majority of us who aren't inventors, scientists, discoverers or explorers, the chance to do something first doesn't come along very often. I remember walking through the Harbour Tunnel before it opened; I think it will be pretty neat to be among the first to ride on the North West Metro when it opens, and so I don't think of these people waiting in a queue to be among the first to own a new pair of trainers as being anything other than the modern equivalent of explorers.

The question then remains, why trainers of all things? Why not? Is there anything different in principle between collectors of art, coins, stamps, old books, antiques and say six year old children who like stickers? There doesn't have to be a sensible reason for it at all. People like what they like. I've written previously that trainers can have as interesting a story as anything else you might like to mention (see Horse 1933) and they've been around long enough now to have their own history. I think that it's also perfectly find for people to obsess over them and never wear them either. Is there anything different in principle between a trainer which is never worn, or a coin which remains uncirculated MS-70? I've seen people queue for several hours for uncirculated releases from the Royal Australian Mint.

Are these people camping out overnight to buy trainers crazy? Quite possibly but they're making an investment in their happiness; which may or may not pay dividends.
Posted by Rollo at 11:11