Change We Can Believe In - Yes We Can

Right of the top of my head, these are the slogans for political campaigns which immediately spring to mind. The secret to a good political campaign is identical to that of a good advertising campaign in that if it is to be successful, it should live long in the memory. Both are about selling something to the general public and the only difference is that the currency of one is dollarpounds and the other is votes. If you can !make the public part with enough of either, then you've sold whatever it is that you're trying to sell, irrespective of whether or not the thing is good or rubbish.

I want you to imagine a time before the internet before television, before radio and before mass literacy. How do you sell something like a political candidacy to illiterate people, so they they will part with their prescious votes? In exactly the same way as you do in the age of the internet, with spectacle and viral marketing.

In 1840, William Harry Harrison was running on the Whig ticket with John Tyler against the incumbent and increasingly unpopular President, Martin Van Buren. Van Buren was a President who was absolutely a policy wonk who had done all right in the White House as far as legislative goes but was in charge when the financial panic of 1837 happened and the subsequent derepression which followed, and so the Whigs decided to put up someone who had a great deal of name recognition with the general public because he had been an officer in the war against the Native Americans in 1811. Harrison had done so well that he became "Mister Tippecanoe" after the battle which he had won, and would go on to continued fame in the War Of 1812.

The Democrats on the other hand, wanted to portray Harrison as a back water hick, who was born in a log cabin and liked hard cider; both of these accusations had an element of truth about them. The Whigs though, decided to turn this to their advantage and came up with a marketing plan to install their man in the White House. Quite possibly this is the first instance of this in a modern sense but what the Whig political marketing machine came up with, was a jingle and a giant prop.

This is a photograph of another giant rolling ball which was used in the campaign of 1888 for the election of William Harry Harrison's grandson Benjamin but it illustrates perfectly what this commotion was all about; a giant ball made from iron and canvas was made with a bunch of slogans on and was rolled from town to town by hand, accompanied by the campaign song. If you see a twelve foot ball being rolled down the street, with a theme song to go with it, you aren't going to forget that in a hurry. The song itself is self referential as well and speaks of "the ball rolling on" for Tippecanoe and Tyler too. Almost certainly this is where we get idioms like "getting the ball rolling", as the campaign rolled an actual ball from town to town.

They Might Be Giants recoreded a version of this song on their 2004 album "Future Soundtrack for America"
Link: https://www.youtube.com/watch?v=IFaRklAYanY 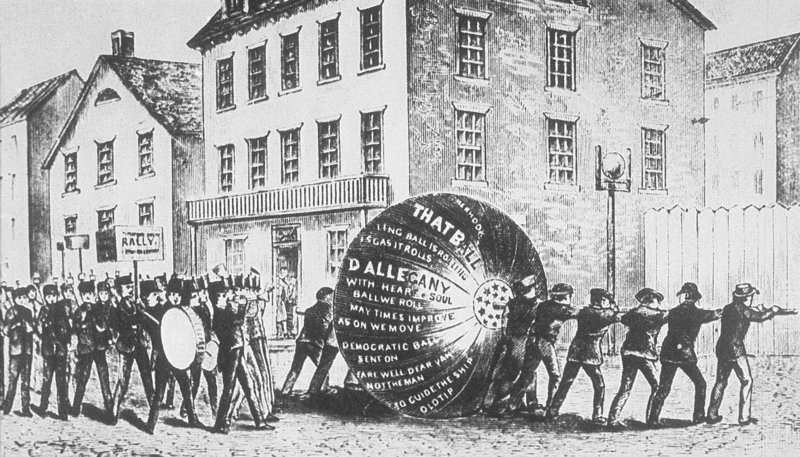 Right here I think is the beginning of the modern political campaign. By spinning the accusations of the opposition around, Tippecanoe and Tyler too, rolled the ball right through the front door of 1600 Pennsylvania Avenue. "Old Kinderhook", which was the nickname of Martin Van Buren (after his birthplace of Kinderhook, New York), wasn't particularly O.K. with the results of the election either because the campaign of song and spectacle worked; Harrison was elected as President.

Harrison didn't last long as President. At the time it was suggested that he died of pneumonia caused by exposure from standing around in the cold Washington winter during the inauguration but the theory which is more commonly held now is that he probably died of some water borne disease which was carried in the water of the White House. Possibly as many as seven people died as a result of the White House's contaminated drinking water over the years. What the people of the United States got after that was the Presidency of "Tyler too", and be became the first President to assume the role after the former one had died in office.

As a president Harrison was singularly unsuccessful. Part of a good presidency is living long enough to do something and he didn't. Harrison is only famous for dying and a campaign song; which has mostly lived longer in the memory than he did.
Posted by Rollo at 07:17

Hi , thanks for sharing your information.The insights are really helpful and informative. If you want to learn about POLITICS, this will be the rightplace for you.
best Political strategist in india
political marketing agency