People who have followed this blog for a while will recall that I have written many posts about the Prime Ministers of Australia. The interesting thing about this is that if you look closely at the Constitution Of Australia Act 1900, the post of Prime Minister isn't named at all. Something called a Federal Executive Council must report to the Governor General but there is no indication that that needs to be the same person every time nor that the Federal Executive Council needs a permanent head.
Convention dictates that there is a Premier of the Cabinet but again, the Cabinet and the Federal Executive Council need not necessarily be synonymous with each other. Conceivably it is entirely possible for a cabinet of equals to send all the various ministers in turn to see the Governor General but I digress.

The fact is that a Prime Minister does exist and has been firmly established by convention, even if governments aren't imaginative enough to conceive of  some other model.

It follows then that in factional and party politics, that if there is a leader on one side of the chamber that there is also a leader on the other side of the chamber. The Leader of the Opposition is a phenomenon which historically occurred later than the Prime Minister but is still something which we recognise in adversarial politics.
These blog posts aren't about each and every Opposition Leader; just the unsuccessful ones.

The political aim of the Opposition Leader is to lead their party to government and many Opposition Leaders have done precisely that. I have already written about Australia's Prime Ministers and so I don't really need to cover that ground again. These blog posts are about those Opposition Leaders who never became Prime Minister; in the world of politics, they have failed in their aim to some degree. This is a list of "never was" and is a list of mostly forgotten people. If success has many parents and failure is always an orphan,  then these are the orphans of Australian political history. 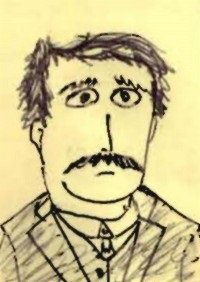 The first of these political orphans is Francis Gwynne "Frank" Tudor, who was born in 1866 in Williamstown, Victoria. He first worked in a sawmill and then a boot factory before being employed as a hatter in Victoria, before moving to England where he would become vice-president of the local Felt Hatters' Union and then moving back to Victoria.

Upon coming back to Australia, he moved into labour politics and then found himself on the Victorian Trades Hall Council and became its President in 1900. He was elected to the seat of Yarra in the first General Election in 1901 and would continue to be its Member of Parliament until his death in 1922.

Tudor became the party whip and the secretary of the Labor Party and then was Minister for Trade and Customs during the three non-consecutive Fisher cabinets in 1908-09, 1910-13 and 1914-15. He continued as Minister under PM Billy Hughes but resigned that post in 1916 when it became obvious that Hughes wanted conscription at all costs.

Hughes took the country to two referenda on the issue of conscription and the work of Tudor who spoke at several anti-conscription rallies across the country, helped to defeat the issue at the October 1916 referendum. Despite his success on this issue Tudor would see the number of ALP seats be devastated from 42 to just 22 in the 1917 election. Tudor had to fight against Hughes on the same issue and yet again, his work also saw the December 1917 referendum also defeated and this closed the issue of conscription for good.
Having seen off two conscription referenda, Tudor expected to do better at the 1919 election but Labor would only gain 4 more seats and was still 12 short of the number required to change the government.

Naturally as you'd expect, the party wanted to replace him before the 1922 election and Thomas Joseph Ryan who was the ex-Premier of Queensland and had served as his Deputy was touted for the roles but he died of pneumonia in August 1921; a fate which Tudor would suffer on 10th January 1922. The task of leading Labor fell to Member for Hunter, Matthew Charlton.

Frank Tudor was the both first leader of the Labor Party to die in office and the first Opposition Leader never to become Prime Minister. Unfortunately, he was in opposition to an ex-Labor Prime Minister in Hughes, who was also broadly socialist and rather popular.
Posted by Rollo at 07:17