I have already written before that I think that although the 5 cent coin is cute with its little echidna staring out at as, it really has worn out its welcome and outlived its purpose¹. New Zealand quite rightly has got rid of theirs and there is a decent argument to be made that the United States should get rid of pennies and nickels. All of these things pile up in your wallet like little bits of metal after you've thrown a timing belt, driving valves into the cylinder head and spewing shards through the engine. The five cent coin is so bad at fulfilling its only function, to facilitate the transaction of commerce, that it is debatable whether or not there is a net economic benefit to picking one off of the pavement - my charge out rate is $360/hr and if you were to divide that by 60 minutes and 60 seconds, you end up with 10 cents per second².
That aside, I have a similar idea which would promote economic activity by playing with people's psychology. Replace the 5 dollar note with a coin.

There is a concept in economics called the "denomination effect" which basically says that people are more likely to spend smaller bits of currency than bigger ones. Admittedly this blurs quite a lot when you start moving into using plastic cards because all amounts tend to be more psychologically fungible but if you think about it, you're more likely to spend two twenties and a tenner than you are to break a twenty a fifty, aren't you?
Likewise, people are more likely to spend coins than they are to spend a note. If someone had a five dollar note and a five dollar coin, most people will spend the coin before they spend the spend the note, even though they are both worth five dollars. It's also worth noting that initially there was a little bit of push back when the new five dollar note was released and people were more likely to retain the new note than the old u but when that perceived newness had worn off, the spending rate was identical.

If people are more likely to spend coins rather than notes, then the people who benefit from this are the small businesses and retailers who sell smaller items. If people are more likely to spend money at smaller businesses then this keeps their tills ticking over and conversely, they are more likely to employ people. For some hitherto unknown reason, people have it in their head that by cutting penalty rates on Sundays that is  going to have a marked effect on employment but if people are generally spending more anyway, for the other six days of the week then this has a far larger effect. If the intent is to play the magic piano of capitalism³ then playing it faster is better than changing the sheet music.

If we assume an inflation rate of 4%, which is a good rate to use because that appears to work since about the beginning of the founding of the city of Rome, then the one dollar note which we first had in 1966, had the equivalent buying power that $7.14 does now. If that is true, there's probably an argument to be made that we should future proof the currency and change the ten dollar note for a coin too.
Not that I'm specifically advocating this but when Australia does become a republic, which I suspect will happen by 2030, then we'll need a new design for the fiver anyway. I can't imagine that in a future Scottmorric Republic Of Australia that we'd want Charlie Boy III on the banknotes anymore. The rest of the suite of banknotes need not change at all and although all of the obverses would have to change, the planchet and the reverse does not.
We have toyed with the idea of a five dollar coin in the past, firstly with a bimetallic coin commemorating the centenary of women's suffrage and then the centenary of the birth of Sir Donald Bradman but they didn't really inspire the public that much. I reckon that either of them could have been suitable for the circulating five dollar coin and I'd be perfectly happy it either of them actually was. 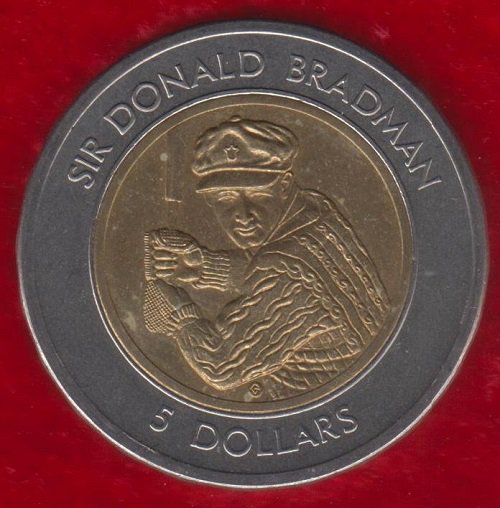 A five dollar coin would be more likely to be spent because of the denomination effect, is an investment in the future but I must admit that my real reason for wanting such a thing is because coins are more readily acceptable by vending machines in supermarkets and I find it a real annoyance when I'm standing trying to feed beat up banknotes into the note acceptors. Yeah, this whole blog post is one giant petty complaint because it took me too long to shove a fiver into an automatic checkout and I had a bunch of people staring at me.

PS: nobody is going to miss hundreds if we got rid of those either.