General Motors Holden as from 17th October 2017 is a brand only. With the end of the J300 Cruze production already halted forever and the last "Commodore" to roll out of the factory later this year (I don't care what they choose to slap the nameplate on, we both know that it ain't a Commodore), the General apparently feels as though they can stick whatever badge on whatever and the Australian public won't notice. 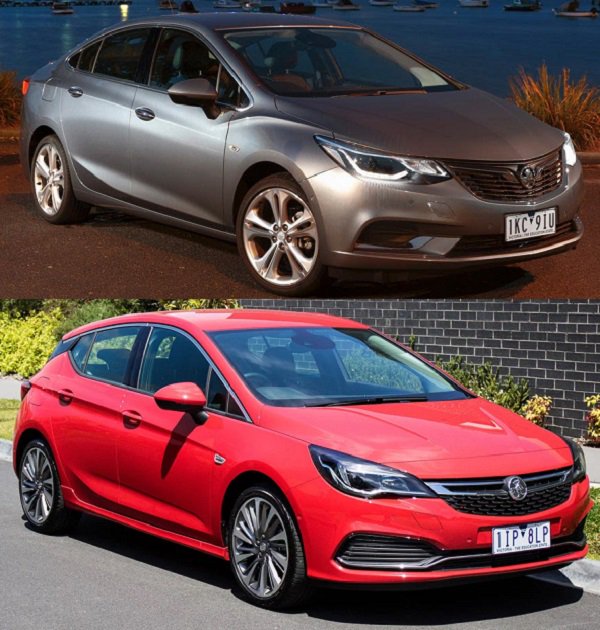 The top of those two cars is the Chevrolet Cruze J400. The bottom of those cars is the Opel Astra K. Yet magically in Australia, they are both the new Holden Astra. They share a nameplate and that's it. They share no other component whatsoever.
The sedan has a longer and narrower wheelbase than the hatch and the engine in the sedan is the LE2 as opposed to the A16SHT in the hatchback. They share no similar body panels and this is evident with everything from fold lines, to where the window meets the A-pillar, to the light clusters. There hasn't even been much of an effort made to make the two cars share a common design language in the grille either. These two cars are about as similar as two completely dissimilar things in a pod.

On the Holden website, they are gloriously obfuscatory about the whole thing. Rather than admit that there are two very very different cars which share nothing but a name, they describe them as the "New Astra Family" and when you follow the links through you get the message:
Now available as a sedan or hatch, discover the right Astra for you.
This seems to imply that they are the same family of cars, when apart from the D2XX platform, they share little else. Probably and I don't know for certain, Australia's hatchback Astras will be coming from Ellesmere Port in the UK and the sedan will come from the Gunsun factory in South Korea. If that's a "family", then it's a family which doesn't talk to each other that much.

Compounding this is the issue that Adam Opel GmbH, which also owns Vauxhall, was bought by Groupe PSA which primarily makes Peugeot, Citroën and now DS as a stand alone brand. I suspect that what that means for Holden is that the Astra K has a limited life within the GM suite and that by about 2020 it won't be available. If that happens, then Holden will be left without a small hatchback between the Barina and... well they also won't have the NG Commodore either because by then, Opel will have been long gone.
Holden might be selling the "Astra" nameplate on a car in the future that will be once again not an Astra and once again the car that is actually an Astra will not be available here. That is if Holden manages to manage its transition from "Australia's Driving Future" to "Just another importer" after they've burnt all the goodwill they've built up in the blink of an eye.
I mean come on guys, you're not really trying any more, are you?
Posted by Rollo at 23:46