I have a personal grand theory about Doctor Who which is as daft as it is delightful, as brilliant as it is balderdash and as unlikely as it is unprovable. Nevertheless because of the fact that it can not be disproved, then it stands to reason that it must be completely true. The theory is probably my own unique headcanon and as far as I'm concerned, I am not changing it - it is thus:
Any time that you see any actor from Doctor Who in any other production at all, those things are instantly part of the Whoniverse.
This has some really really strange ramifications; which as far as I can tell do not break the laws of space and time but rather because time is a big timey-wimey ball of stuff, only serves to prove that the theory is even stronger.

The show Worzel Gummidge is actually not an independent show but a really complex Third Doctor arc, which clearly falls somewhere between "The Sea Devils" (LLL) and "The Mutants" (NNN). Likewise, Broadchurch is also not an independent show but an arc of Tenth Doctor stories which are possibly no later than "The Waters Of Mars" (4.16). It also means that The Thick Of It and In The Loop are Twelfth Doctor stories and presumably falling somewhere between "Hell Bent" but before "The Pilot". Unfortunately the alter ego of Malcolm Tucker is so foul mouthed that I won't watch the arcs but the explanation that something terrible must've happened in between the loss of Clara and his arrival at the university, fits nicely.

This also means that Father Brown must be the continuing story of Rory Williams' dad Brian after Rory and Amy got stuck in New York City in 1936 and can never be retrieved. I suspect that Brian was so distraught that becoming a priest in the 1950s and solving crime was a worthwhile distraction.
The only proper way to explain Victoria is that after "Hell Bent", Clara has assumed the role of the British Monarch as indeed Ashildr has also assumed the role of Arya Stark in Game Of Thrones.

Which all brings me to the two screen grabs that I managed to get from the arc "The Taxidermist And The Explorer", which comes after the end of "The Doctor Falls". 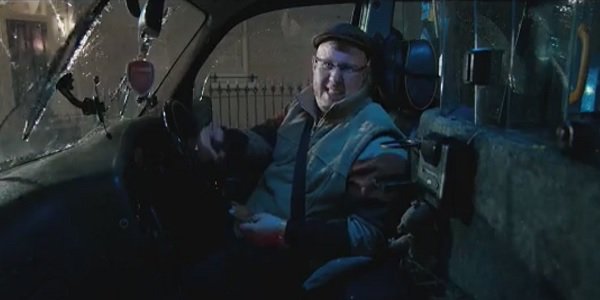 - This time Nardole appears to have gotten the chameleon circuit to work on the TARDIS. 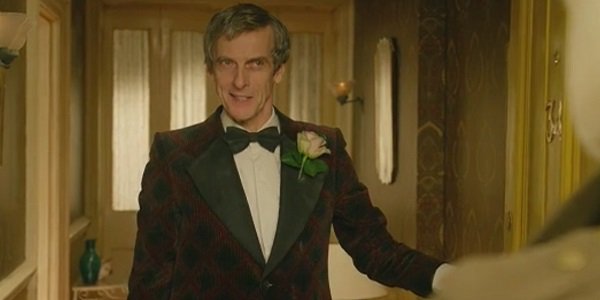 - Not a lot of men can carry off a decorative vegetable.

In the "The Taxidermist And The Explorer" (Series 10, Episode 13), an explorer in the 1920s accidentally find a species of talking bears; one of who later grows up and returns to London, which inadvertently sparks off an evil scientist's plans to have the bear taxidermised and placed into a museum. Admittedly The Doctor only has a minor role in the story but it is his information, which ultimately seals the evil scientist's fate.
We see The Doctor go through an absolutely terrible set of wardrobe, the like of which hasn't been seen since the Sixth and Seventh Doctor but there is a nice touch where he explains that he is prepared to eat sandwiches made from meat that expired a week ago.

Everyone else seems to think that this is a movie called "Paddington". Well not any more, it's a Twelfth Doctor story now!
Like I said, because of the fact that it can not be disproved, then it stands to reason that it must be completely true.
Posted by Rollo at 07:17